With the honorable mentions out of the way, it is now time to move on to the top 10 games coming out in 2016 (hopefully!) that I’m looking forward to.  This first post will be games 6-10 of my top 10 upcoming 2016 releases and the next one will tackle games 1-5.  These are all games that have really interested me in some way, shape, or form and I can’t wait to try them out or at least get more information regarding them!  Before moving on to this list please feel free to click the links below and check out posts 1-6 of my “End of 2015” series.

Alright, with all of that information out of the way we can now move on to the main event.  Again, this will be my top 10 of 2016 games that I’m interested in and this particular post will feature games 6-10.  Enjoy the read! 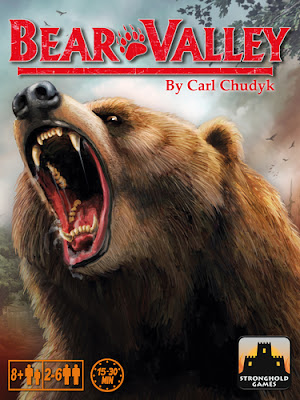 Bear Valley is a game where you are trying to be the first to survive the wilderness as you are attempting to reach the safety of your camp.  This game is designed by the fabulous Carl Chudyk and will be published by Stronghold Games around April of this year.  The game uses card play and tile-placement as well as some other mechanics as you are attempting to move your pawn to the safety of the camp before the other players.  After all, you don’t need to beat the bear, you just need to beat your friend!  It appears as though there will be an easy mode and a more advanced mode in the game which I always like.  You will draw a card and then move your pawn in an attempt to get closer to the camp without getting lost.  There are ways to avoid the bears that you will come across on your journey.  This game is on my radar simply because of the pedigree of Carl Chudyk and the great publishing of Stronghold Games.  I have high hopes for this game and hope it is a solid push-your-luck card game! 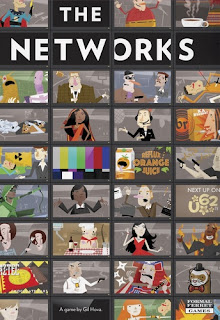 The Networks is a 1-5 player game where you are taking control of the scheduling of a television network in order to create the best lineup of prime time shows.  This game is designed by Gil Hova and is published by his company, Formal Ferret Games.  This game uses hand management and card drafting as its primary mechanisms as you are attempting to create the best television programming and beat out your competitors.  This game was Kickstarted in September of 2015 and so far is on schedule to hit backer’s doors either later spring or early summer, before the major convention season.  I saw the Rahdo runthrough of this game and was hooked.  It looks like a great, lighter (but still with plenty of difficult decisions!) game that we will be able to play ourselves and also break out with friends when they come over for a game night.  The art and cards are witty and keep with the light and fun nature of the game.  To be honest if I hadn’t Kickstarted The Networks I think it would be even higher on this list.  I have no doubts that this game is going to be wonderful and it even has the chance to be one of my favorites of 2016! 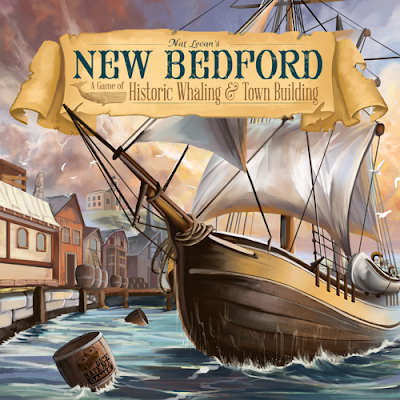 New Bedford is a game where you take control of a whaling crew and build the town of New Bedford into a thriving whaling community.  This game is designed by Nathaniel Levan and is published by Great Than Games’ imprint, Dice Hate Me Games.  This game uses resource management, city building, and worker placement as its primary mechanics while you are building up the town of New Bedford into a community of great wealth and prosperity.  Players take their two workers and will place them on different buildings during their turn in order to take different resources and actions as they are vying to be the best whaling crew.  You are able to build the town larger as you add more buildings and get better, more powerful actions with said buildings.  The art direction really improved with the updated Kickstarter and they did a fabulous job with the running of the campaign.  I think this is going to be a big hit in our house and I can’t wait to give it a try when it reaches our doors (hopefully!) this summer. 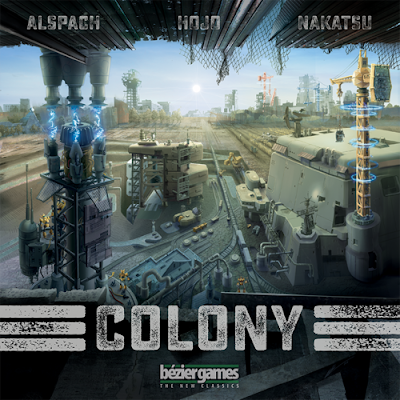 Colony is a game where you will be building up a fledgling colony and trying to make it the best out of your competitors.  It is designed by Ted Alspach, Toryo Hojo, and Yoshihisa Nakatsu and is published by Bézier Games, Inc.  This game uses dice rolling, dice/pool drafting and trading as its primary mechanics as you are creating your colony of the future.  Each player will be constructing and upgrading their buildings as they are attempting to manage their resources in the most efficient way.  The dice are used as the resources which sounds really cool.  Each side/number will represent different resources and some of them will be stable and able to be used in later rounds while others must be used right away.  Buildings that are built will add new capabilities for the colony and capture victory points which will be what the players are looking to gain.  This game looks really cool and may be the first Bézier Games’ game that we get. 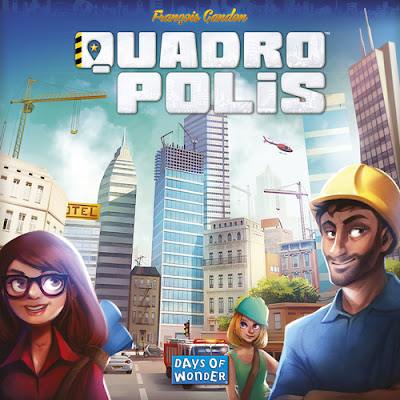 Quadropolis is a new city building game that is coming out in the next couple of months.  This game is designed by François Gandon and is published by Days of Wonder.  This game uses tile placement, set collection, and city building and you create your city SimCity style from tiles on a common board.  This is the new Day of Wonder production which means that it is beautiful and the mechanisms in the game are rock solid.  I’ve seen a few playthroughs and reviews and this game appears to be right up our alley.  It has cool city building with some great decision making all wrapped up in the beautiful Days of Wonder package.  I would be very surprised if this game wasn’t on our shelves by the end of the year.

And there we have it ladies and gentlemen, my game 6-10 of my top 10 interests from 2016.  I am really looking forward to these 5 games and they aren’t even my top 5!  Keep your eyes peeled for my next post which should be up either tomorrow or soon thereafter.  It will contain my top 5 game interests from 2016…and these all look amazing!  Thanks so much for taking the time to read this post and feel free to comment below.  I’d love to hear what games you’re looking forward to this year!  Until next time, game on!