Woot!  Gen Con 2018 is literally a couple of days away and I’m getting very excited to see what is in store this year!  This will be my second year at the Con and I’m just as excited to see the spectacle that is one of the largest boardgame conventions in the world.  This year I’ll only be doing two posts for Gen Con anticipations as I’ve been fairly busy this month and also because there aren’t a top of anticipated games for me.  This year’s list isn’t quite as impressive as last year’s but I’m still pumped to just hop on the floor and see all the things to see!  I may end up doing a post-Gen Con post but we’ll see what comes of that.  Check out the list of games over on BoardGameGeek’s website (https://www.boardgamegeek.com/geekpreview/7/gen-con-2018-preview) if you’re curious to see what is releasing at the convention.  This post will take a look at the five boardgame expansions that I’m most interested in picking up or trying out during the convention.  I think that’s enough housekeeping, let’s move on to meat of the post. 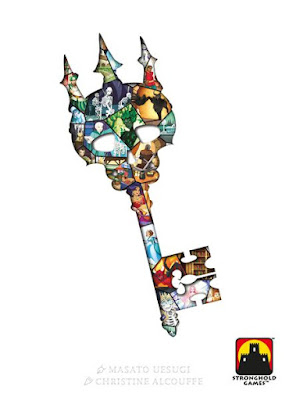 Beyond the Gates is a new expansion for the 2017 Catch Up Games/Stronghold Games card game, Paper Tales by designer Masato Uesugi.  Beyond the Gates is also designed by Uesugi and will see its release at Gen Con 2018.  Paper Tales is a card-drafting and hand-management game where you are creating a kingdom to fight against your rivals and shape the realm to your liking.  It uses some of my favorite mechanisms in hand-management and card-drafting and uses some beautiful and interesting art to get its theme across.  This expansion adds in some more cards to the base game, adds in more players and also adds in a solo mode just for kicks!  I haven’t actually played the base game yet but it is on my list to possibly buy this year and I’m really looking forward to trying it out and it I like it adding in this expansion! 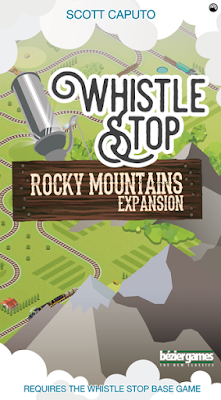 Rocky Mountains is a new expansions for the 2017 Bézier Games hit, Whistle Stop by designer Scott Caputo.  Rocky Mountains is also designed by Caputo and will see its release at this year’s Gen Con.  Whistle Stop is a tile-laying, set­-collection and pick-up-and-deliver where you are building up an area in order to bring your trains from coast-to-coast and drop off resources for points.  It is a game that we own and have had a ton of fun in the plays that we’ve gotten out of it so far.  This expansion adds in a new almost 3D element where there will be more tiles on the board to create the Rocky Mountains as a barrier in between your railroad companies and the west coast.  While they will create a barrier, the Rocky Mountains will also give the players more ways to score points by going through the passes and over the range.  There are new tiles, upgrades and shares in added to the game and I’m really looking forward to what they add. 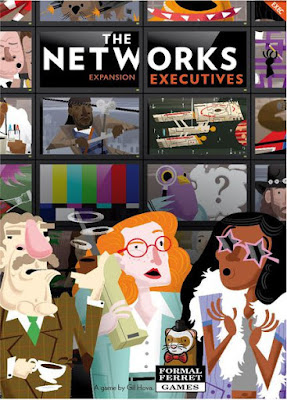 Executives is the first large expansion to the 2016 Formal Ferret Games hit, The Networks by designer Gil Hova.  Executives is also designed by Hova and will see its release at Gen Con 2018.  The Networks is a card-drafting and set-collection game where the players take on the role of a network television company who are trying to create the best station after starting with terrible cable-access programming.  The card-drafting and set-collection in this game is absolutely awesome and I love every play that we get in.  This expansion adds some things that I think will not just make this a good game, but a great one!  This expansion adds in executives which will give each player a different (assymetrical) start to each game.  These executives will give specific powers and weaknesses in the start of the game.  It also adds in some new show cards and a beginning draft to make the start of the game even more interest than the original.  I have this game on pre-order and will be picking it up at the convention and I can’t wait! 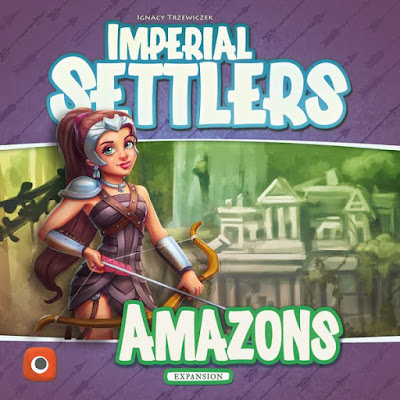 Amazons is another large faction expansion to the 2014 Portal Games hit, Imperial Settlers by designer Ignacy Trzewiczek.  Amazons is also designed by Trzewiczek and will see its initial release at Gen Con this year.  Imperial Settlers is a hand management, card-drafting and civilization building game where the players take on the role of a faction attempting to make expand their boundaries and build their empire into the greatest around.  This is one of my favorite games so anything added to it is something that I am automatically interested in.  This expansion will add in a brand new faction, the Amazons.  This one will add in a deck-building idea where the faction will be able to discard some reconstructed faction cards from their deck and modify it during the play.  They also benefit from building cheap faction cards.  I’m very excited to try this faction out and see how much they differ from the previous six.

#2 – Ashes: The Spirits of Memoria & Ashes: The Demons of Darmas (Plaid Hat Games) 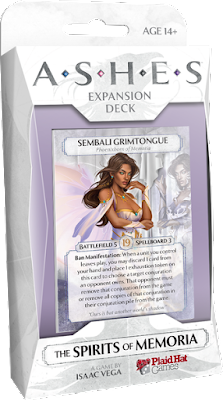 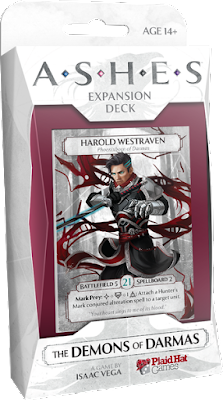 The Spirits of Memoria and The Demons of Darmas are two new expansion decks to the 2015 Plaid Hat Games hit, Ashes: Rise of the Phoenixborn by designer Isaac Vega.  The Spirits of Memoria and The Demons of Darmas are also designed by Vega and will see their primary release at Gen Con 2018.  Ashes: Rise of the Phoenixborn is a hand-management and dice-rolling battle card game where the players will build a deck (or use pre-constructed player decks) focused around of the powerful Phoenixborn who are in the game.  This game uses some great card mechanisms and dice-rolling as mana to create one of my favorite games of all times!  These expansions will add in two new Phoenixborn to the already large roster and they will in turn bring in their own different key-words and game mechanisms.  I love how different each character is from the next and can’t wait to get my hands on these decks to really sink my teeth into them! 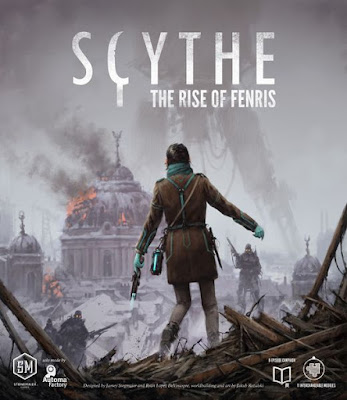 The Rise of Fenris is a new large expansion to the 2016 Stonemaier Games hit, Scythe by designer Jamey Stegmaier.  The Rise of Fenris is also designed by Stegmaier with help from Ryan Lopez DeVinaspre and will see its release at this year’s Gen Con.  Scythe is an economic, area-control and simultaneous action selection game where the players will each take the role of one of the factions of the game who are trying to make it to The Factory first in order to gain an upper hand and take control of the area from the others.  This is a really good game which was already highly improved by some of the expansions.  This expansion has been a bit of a secret but we know that it will add in a campaign to the game that is 8 specific games long.  It will also add in a bunch of modules which will really add to the replayability of this already great game.  I am really looking forward to this expansion and can’t wait to see how good it really is.


There you have it folks, my top 5 (plus 1 honorable mention!) expansion anticipations coming out at this year’s Gen Con.  I will definitely pick some of these up and hope to have the played shortly after the convention as they all seem to add flavor and replayability to their respective base games but don’t seem to add that much in the way of new rules.  Let me know what expansions I may have missed!  My next post will take a look at my top 5 anticipated releases from the convention (that aren’t expansions…mostly) and I’m looking forward to writing it up.  Thanks so much for taking the time to read and I hope you enjoyed.  Until next time, game on!