Well, even with all of the roadblocks and life-happenings getting in the way I’ve finally made it to the final post in my Essen Spiel series.  This particular post will take a look at the games that weren’t for sale but had some sort of demo available to try at the convention.  I will say that this year’s crop wasn’t nearly as interesting overall as last year’s but there were still some that piqued my interest.  These are the five games (plus one honorable mention) that were interesting enough to turn my head.  Before I go into these games feel free to check out my previous five posts in the series that take a look at my top anticipated expansions, reprints and original games.

Alright, now let’s go ahead and move on to the meat of the post.  These games don’t yet have a release for purchase but they were available to demo and try out at Essen Spiel.  These are my top 5 (plus 1 honorable mention) games that had a demo but you couldn’t buy.  Enjoy! 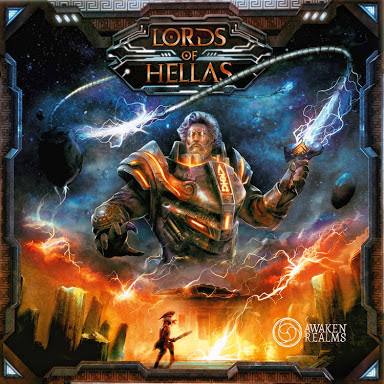 Lords of Hellas is a card-drafting, hand-management and area control game designed by Adam Kwapiński and published by Awaken Realms.  This game has players controlling an asymmetric hero who is able to do different actions in order to gain power and complete one of the varying paths to victory.  The game not only has variability in the asymmetric heroes but also in the fact that they are multiple paths to victory.  One hero may choose to slay monsters wandering the map while another hero chooses to control different areas on the board.  The heroes could also choose to build temples and monuments in order to help with their different actions.  This game has some amazing components and looks absolutely beautiful on the board and I’m hoping that the gameplay can hold up to the amazing pieces. 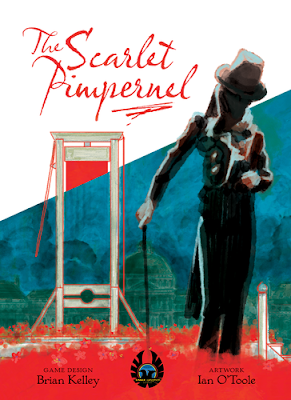 The Scarlet Pimpernel is a worker-placement game with variable player powers that is designed by Brian Kelley and published by Eagle-Gryphon Games.  This game puts players in the role of one of the followers of The Scarlet Pimpernel as he moves about France and attempts to save innocents from the Committee of Public Safety and their guillotine.  The players will draw a mission card which will have a number of supporters and resources on it and then the players will go in turn order to gather said resources and supporters and bring them to the areas to complete the missions.  This continues on for seven missions and the player with the most points win.  This game looks like a fun worker placement game with a super interesting theme and not a high level of difficulty to enter into it.  I’m interested to see this Kickstarter and how it progresses.

#4 – Cerebria: The Inside World (Mindclash Games) 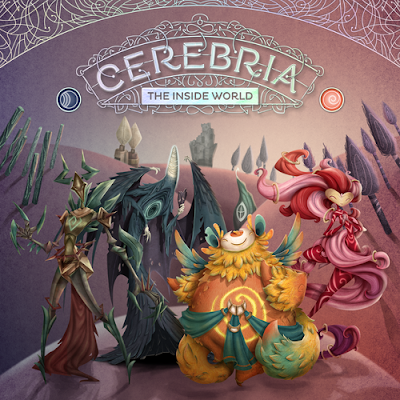 Cerebria: The Inside World is a hand-management, deck-building and area control game designed by Richard Amann and Viktor Peter.  This game has players joining either the side of Bliss or the side of Gloom as they try to gain a foothold in shaping the Identity.  Players will take turns doing different actions such as moving around to the different realms and invoking/quelling Emotions.  The game continues with the players attempting to gain more control with the side that they are representing.  The state of Cerebria will be in constant flux during the game and the players need to realize and work with/around this as they attempt to gain the controlling power of the Identity.  This game is another with beautiful artwork and components and a very interesting theme.  I am looking forward to trying this one out! 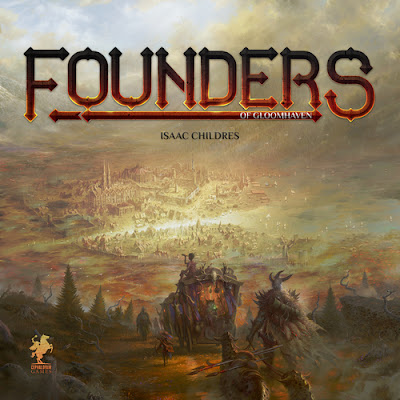 Founders of Gloomhaven is a city-building, hand-management and tile-placement game designed by Isaac Childres and published by Cephalofair Games.  This game is a prequel of sorts to Gloomhaven as it essentially tells the story of the founding of the city.  In the game the players will take control of a race as they help each other build up the city from scratch.  The game is interesting as you have to actually use the resources of other races or else you won’t be able to build anything.  I really like the idea of an element of co-operation which really lends itself to the theme of this particular game.  This is a heavier game where the players will be making routes to other player’s areas to “borrow” the resources to make other buildings.  I am looking forward to trying this game out. 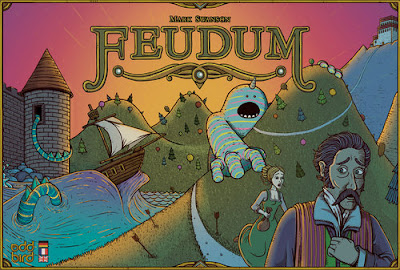 Feudum is an economic, hand-management and area-control game designed by Mark K. Swanson and published by Odd Bird Games.  This game puts players into the role of a group who have been banished from their land and stripped of everything they had.  The group then journeys to another land where they will attempt to gain back their honor and reinvent their nation.  The players control several members who are traveling the land, tending to farms, taxing towns and taking outposts in an effort to gain power.  The players will also fight over feudums and increase their status in six different guilds.  This is a massive game and seems to have some many different things that I love in games.  This is probably a game that will eventually end up on my shelf when it is released. 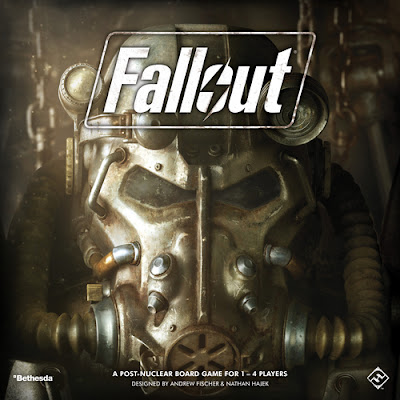 Fallout is an adventure, exploration and hand-management game designed by Andrew Fischer and Nathan I. Hajek and published by Fantasy Flight Games.  This game has the players taking on the roles of characters from the video game by Bethesda Softworks and traversing through the wasteland.  Each player gains an objective that they need to complete that they obtain at the start to help guide them and then it is on!  The players will be exploring the hidden parts of the map, completing quests that they’ve obtained, build their character’s skills and fight the hideous creatures that live in the wasteland.  The game seems to really have a sense of exploration and adventure as the characters will reveal their stories through the different quests and missions they’ll be on.  This video game is easily in my top 5 games of all time and thus the IP was super interesting to me when I heard it was going to be released.  This game will be mine…oh yes…it will be mine!

Well ladies and gentlemen…we’ve finally reached the end of my Essen Spiel series for 2017.  Man has it ever been a ride with moving in between but I’m glad I finished it up.  Some of these games just look amazing and I love that we’re living in a time where there are some many great boardgames to try out.  Thanks so much for taking the time to read this post, I truly appreciate it!  Until next time, game on!