Time for my yearly look at one of the largest boardgame conventions, Essen Spiel 2017!  Gen Con 2017 is in the rearview mirror and now we come up to the convention that seems to have the most new releases each year.  This year is no different as there are over 900 entries on W. Eric Martin’s Spiel ’17 Preview at BoardGameGeek.  These entries range from expansions to full-fledged games to demos that aren’t being released yet but have at least prototype level components so Spiel-goers can check them out.  This post will specifically take a look at the game expansions that I’m most interested in (that I haven’t played/tried yet) that have a first-time English release at the convention.  Much of this list could be subject to change depending on what actually makes it to Spiel, but it seems as though at least most of these expansions will make it.  Enjoy the read! 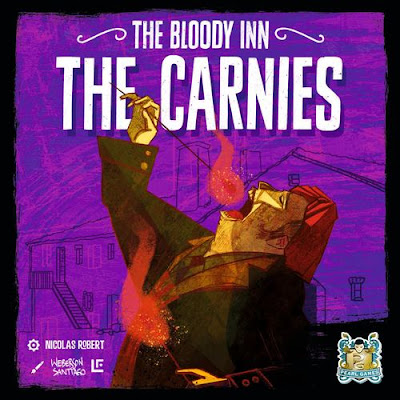 The Bloody Inn: The Carnies is an expansion to the 2015 Pearl Games game, The Bloody Inn by Nicolas Robert.  The Carnies is designed by Robert as well and is going to see its release at this year’s Essen Spiel.  The Bloody Inn is a macabre card game that has heavy hand-management, card-drafting and tableau-building in the competitive game.  This expansion will add three new modules that add some different experiences to the game.  The first module adds in the carnies that can also add in event cards if you want to do so.  The second module adds in notables which replace the nobles from the original game.  Lastly, the final module adds in tips and tricks from your Aunt Ginette who (for a price of course) will give you things to help with your twisted plan.  This expansion looks to add more variability to a game I’ve been interested in for some time and now am even more interested in. 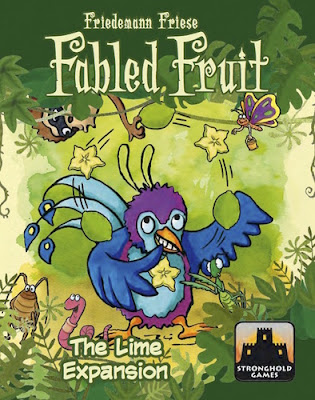 Fabled Fruit: The Lime Expansion is an expansion to the 2016 2F Spiele/Stronghold Games game, Fabled Fruit by Friedemann Friese.  The Lime Expansion is also designed by Friese and will be released at Spiel 2017.  Fabled Fruit is a worker -placement, hand-management and set-collection game where the action spots consistently change.  This expansion adds in 20 new locations for worker placement, the lime cards and gambling tokens which will add new wrinkles to the current gameplay.  We really enjoyed the original game and are looking forward to adding this new content in and going through it all over again! 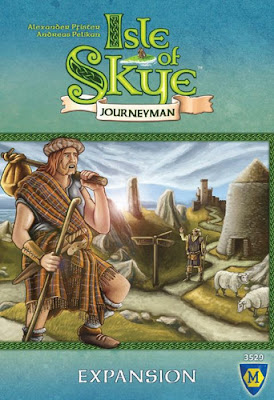 Isle of Skye: Journey man is an expansion to the 2015 Kennerspiel des Jahres winner, Isle of Skye: From Chieftain to King released by Lookout Games/Mayfair Games and designed by Alexander Pfister and Andreas Pelikan.  Journeyman is also designed by Pfister and Pelikan and will be released at Spiel 2017.  Isle of Skye: From Chieftain to King is an auction, tile-laying and set-collection game where each player is building up their own territory in order to score certain changing goals each round.  This expansion will have new player boards to track strength, popularity and prosperity.  There is also a new pawn which will travel the board and activate the tiles as well as some new scoring tiles.  I can’t wait to try this one out! 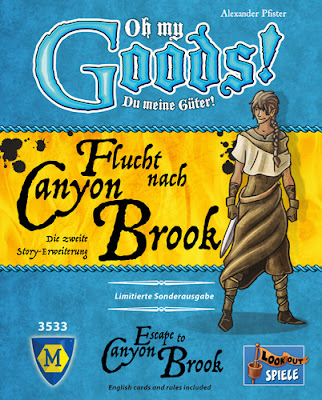 Oh My Goods!: Escape to Canyon Brook is an expansion to the 2015 Lookout Games/Mayfair Games game, Oh My Goods! by Alexander Pfister.  Escape to Canyon Brook is also designed by Pfister and will be released at this year’s Essen Spiel.  Oh My Goods! is a fantastic card game which uses hand-management, multi-use cards, resource management and push-your-luck as each player is trying to get the most points while building up their personal tableau.  This expansion will continue on the footsteps of the prior expansion, Longsdale in Revolt, where Pfister added in a campaign and story mode to the already great gameplay.  I can’t wait to pick this up and add it to the base game and first expansion and look forward to what is to come in the story! 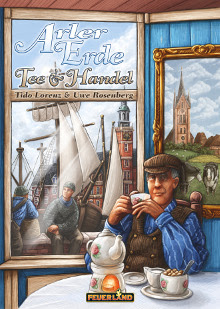 Fields of Arle: Tea & Trade is an expansion to the 2014 Z-Man Games hit, Fields of Arle by Uwe Rosenberg.  Tea & Trade is also designed by Rosenberg along with help from fellow designer Tido Lorenz and will be released at Spiel 2017.  Fields of Arle is a worker-placement, resource-management and economic farming game where each player is building up their personal board in the German area of East Frisia.  This expansion will give players even more things to do as they may expand to trading in the north regions along with more buildings, actions and abilities.  Lastly the game also adds in the ability for a third player to join in the fun!  I can’t wait for this expansion as it will be a personal insta-buy! 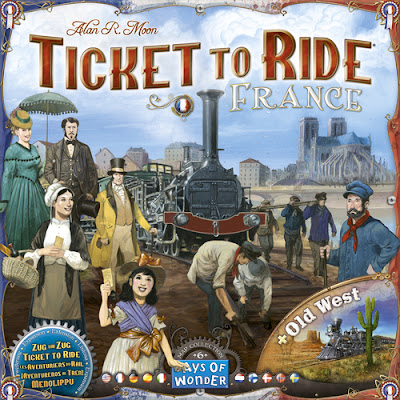 Ticket to Ride: Map Collection Volume 6: France & Old West is an expansion to the 2004 Spiel des Jahres winner, Ticket to Ride released by Days of Wonder and designed by Alan R. Moon.  Map Collection Volume 6: France & Old West is also designed by Moon and will be released at Essen Spiel 2017.  Ticket to Ride is a classic set-collection, hand-management and route-building game where each player is gaining points by laying down their personal trains in order to connect certain cities to each other.  This expansion will add in a double-sided map, one side of France and the other of the Old West.  The France side of the map will add in double tracks that aren’t yet colored where the players need to place a tile when they draw a card in order to create places to go.  The Old West side of the map gives each player a starting location where they will need to build and continue on in the network they have already built.  This is one of our favorite games and we will absolutely pick up everything that comes out for it.

Well, there you have it!  These are my top 5 expansions (plus 1 honorable mention) that are coming out at this year’s Essen Spiel.  Most of these expansions will be in my collection soon as they are already to games that we adore.  So what are your most anticipated expansions?  Keep an eye out as my next post will be on my top 5 anticipated reimplementations/reprint/new editions that are coming out at Essen Spiel 2017.  Thanks for your time and I hope you enjoyed the read.  Until next time, game on!