Yay for day five!  We are chugging along through Unboxing Week and next up is a fun dice chucker!  Before we move on to the main text and unboxing, please check out the previous four posts if you haven’t had a chance to.  You can find them at the links below. 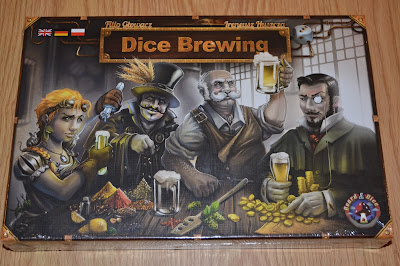 So the game for today’s unboxing is Dice Brewing.  This is a dice-rolling game by Filip Glowacz and Ireneusz Huszcza and published originally by Board&Dice.  StuntKite Publishing has the rights to publish in the United States and that is where we got our copy.  In this game you have a pool of dice which you roll in order to grow light malt, dark malt, and hops and then you put them together in order to brew different types of beer.  There are also blue dice which enable you to change values on dice, reroll, and bump up scores on dice.  This allows for changing of the dice which somewhat mitigates bad rolls from the players.  End game is the player with the most points (derp) which you get from your brewed beers, money, and left over material dice. 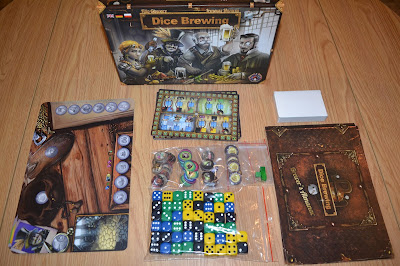 Let’s start out with the rulebook.  This game is actually multilingual so it comes with three different rulebooks.  They are in English, Polish, and German.  The rulebook is nicely laid out but it is obvious that the English rules weren’t the first made due to some slightly odd translation issues.  Mostly they’ve done a great job, but there are just a few questions that arise from what I feel are probably just translation issues.  Overall, though, I think you’ll find that most questions are answered in the rulebook and there are nice illustrations to help along with the process.

Next up we have the box.  This is a slightly awkward sized box.  It is rectangular shaped (not the more square-like like most medium sized games) and is quite shallow.  There was no insert included in the box, just the box itself.  That being said I am glad there wasn’t an insert included.  For this game I would have just thrown it out without using it at all so I’m glad they didn’t waste the materials.  While the box is a slightly awkward size compared to my other games, it is small enough that I don’t find it difficult to store it on my shelves. 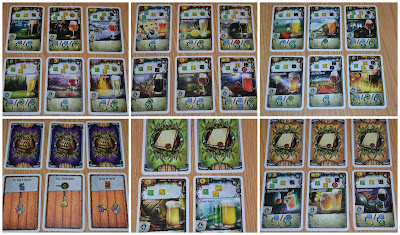 Now let’s move on to the actual game components.  To begin we’ll take a look at the cards.  There are 30 beer recipe cards (26 of them are advanced and 4 are beginner), 4 workplace cards (which are the player aids), 4 storage cards, 1 marketplace card, and 1 black market card.  These are all of a linen finish (which I love), but they are a very low cardstock.  Now this is two sided coin.  The lower cardstock makes cards easier to ruffle-shuffle but on the other hand it makes them much easier to damage.  In the end I don’t mind the cardstock too much because there isn’t a lot of shuffling needed in this game.  You just shuffle the recipe cards in the beginning and place three or four out depending on how many people are playing. 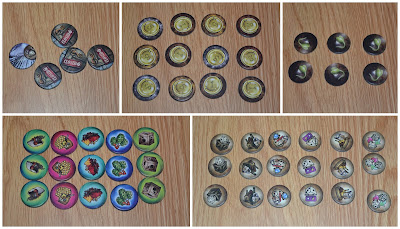 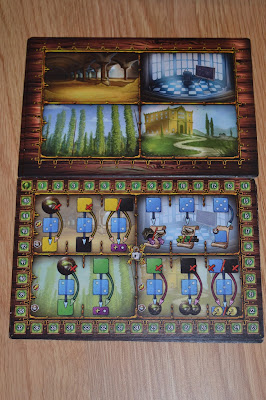 The next components we’ll look at are the cardboard pieces.  There are some round, cardboard tokens that are included with the game.  These include 15 special ingredient tokens, 18 action (or “take-that”) tokens, 6 seed tokens, 4 blocking tokens, 12 coin tokens, and 1 season/priority token.  These are all decent thickness cardboard and will hold up nicely with multiple plays.  Also, made out of this thick cardboard, are 4 player boards which have the actions that you are able to take during your turn.  The only problem I can find with these is that I think that they could be a little bigger. 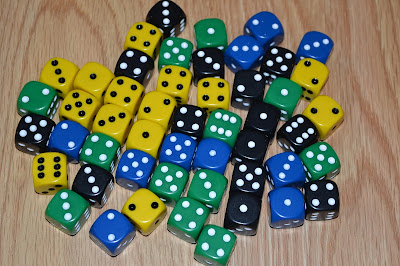 The final component in the base game to mention is of course the dice!  This is a dice-chucking game so what would it be without the dice?  Sadly the dice aren’t custom, but they did do a good job of getting high quality, colored dice that have a really nice heft to them.  There are 50 dice that are included in the box of different colors.  There are 14 yellow (light malt) dice, 14 black (dark malt) dice, 12 green (hops) dice, and 10 blue (brewing skills) dice.  Again, these are simply colored dice but they are of a good quality. 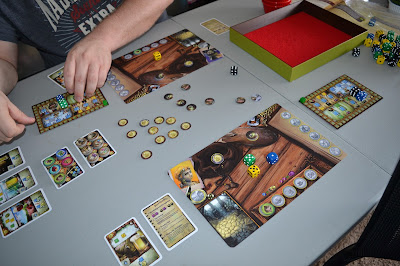 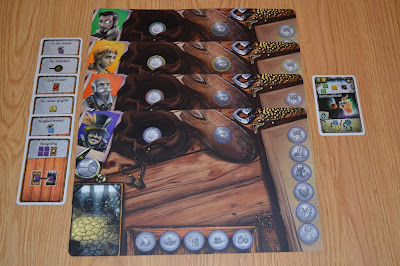 The last thing that I will mention is something that isn’t included in the game unless it was pre-ordered.  These are the player mats, a Red Moon Pale Ale recipe, and 6 pre-release bonus cards that give special things you can do during the game.  The best of these extras are the player mats.  They give nice art and a great place to keep all of your dice and component chits.  They are made out of a plastic material that will hold up great!  The only problem with these mats is that they were made just a few millimeters too large to fit in the box!  Thankfully it was nothing that a simple hobby knife couldn’t solve.

And there we have it!  Unboxing Day Five post is all up and complete!  Let me know what you think and if you have any questions or comments feel free to leave them here or at BoardGameGeek.  This is a fun dice rolling game that my wife and I didn’t like at first but enjoy a lot after subsequent plays.  Check it out!  Until next time, game on!