Onto day two of the epic (perhaps not epic, but I’m entitled to some melodrama right?) week of unboxings. Before we start with the festivities please check out the previous post if you haven’t already done so. Yesterday I did an unboxing of the wonderful Fantasy Flight game, Star Wars:Imperial Assault. You can find the link below this paragraph.


Alright, now we move forward with day two!  I have a bunch of games that have pictures all ready to go so it was tough to really narrow down the games into seven that I wanted to add to Unboxing Week.  However, with that being said, this game was always going to be one of the seven.  Tokaido is an absolutely beautiful game by the fantastic designer, Antoine Bauza of 7 Wonders, Takenoko, and Hanabi fame.  This game was beautifully produced by Funforge and they actually have a collector’s edition that was on Kickstarter over a year ago.  Hopefully that beautiful edition will see the light of day within the next year or so! 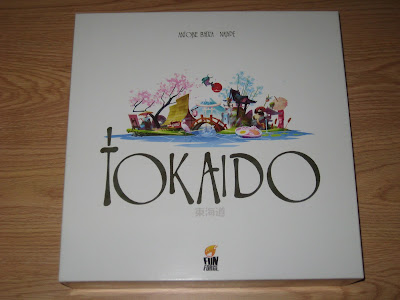 Tokaido is a point-to-point movement game that has elements of set collection and variable player powers.  You take your meeple and travel the “East SeaRoad” in Japan which connects Kyoto to Edo.  You and your fellow players will travel this road and make stops on the way at towns to shop for souvenirs, at temples to pray to the gods, at panoramic spots to paint, at hot springs to relax, and at inns to eat and spend the night.  Basically you are trying to have the best possible vacation imaginable! 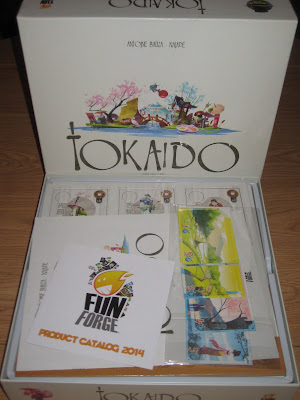 First of all, when speaking of Tokaido, you have to look at the absolutely beautiful art.  The art in this game is done by the fabulous Naiade.  Naiade (Xavier Gueniffey Durin) is quite possibly the best boardgame/cardgame artist out there right now and definitely my personal favorite.  He has worked on Seasons (my current favorite game), Shinobi WAT-AHH!, The Phantom Society, and the upcoming games Melee and The Big Book of Madness.  His work has a very specific style and it fits so perfectly in the boardgame medium.  I always look forward to the new stuff that he puts out. 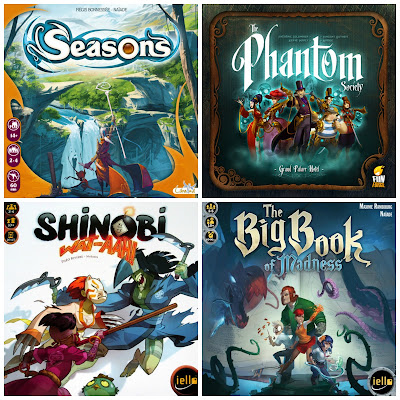 The first thing to talk about is the rulebook.  This is a pretty standard fair rulebook that does a good job in showing how the game is played with some nice looking art within it.  It is nicely put together with good examples of how to play the game.  To be fair, this isn’t a hard game to play so the rulebook should be able to adequately put forth the rules without the player needing to go to outside means (such as BGG forums) in order to find their answers.  This rulebook does a good job as I have personally never needed to go anywhere else to find answers that arise from the game.


Next we move on to the game board.  This is a tri-fold game board that is made over thick cardboard and will hold up very well under multiple plays with no problems.  As well as being well made the game board is completely beautiful.  It has a stark white background with Naiade’s brilliant artwork on top of that background.  The graphics and icons fit perfectly with the theme and make sense as your meeple takes their journey down the East Sea Road.  The board also has places for the cards that you will need during the game.  It is clear and was beautifully graphically designed. 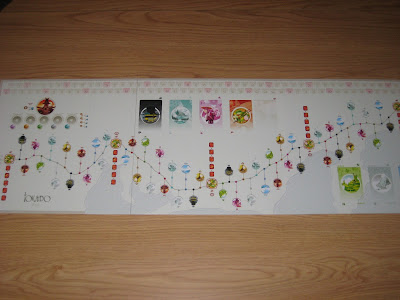 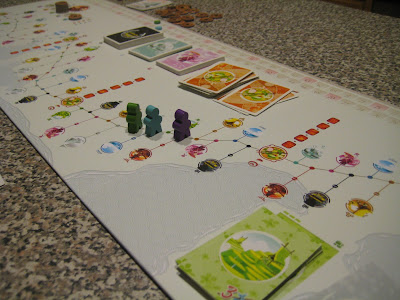 There are over 100 cards in this game in two different sizes.  The first size is the small mini-card size that is popular in many of the Fantasy Flight games.  These are on nice card stock (sadly not the linen that I usually prefer) with rounded edges and they ruffle-shuffle very nicely.  Each of the types of cards have very clear backs with drastically different colors so that they are very easy to sort out at the beginning of the game.  The other size of card is just slightly larger than the mini-card size and they don’t have the rounded edges.  The reasoning for this is because these cards are put together in order to for panoramic pictures as you are collecting the different sets during the game.  All in all the cards are nice and of a pretty decent quality. 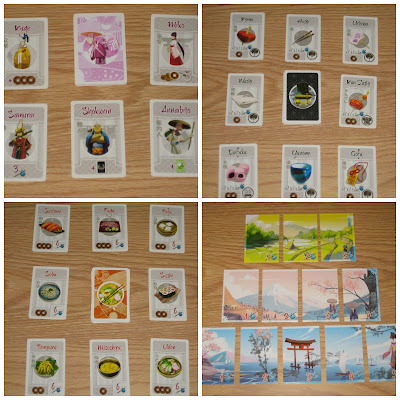 Next up are the components of the game.  These include the cardboard tokens and the wooden pieces.  There aren’t a whole lot of these components as the game doesn’t really need them, but those that are in the game are very nice.  First of all, the cardboard tokens include five colored tokens that show the color of each player and also the coins.  I love the coins!  They are beautifully made and actually have a square hole in the middle of them that really makes them feel like Japanese Yen.  Then, there are the five wooden meeples which are very nicely made and each color also has a small disc which is used for scorekeeping.  The only component I wish was a little different is the five colored discs.  They are a little smallish and I think they could be a little more thematic. 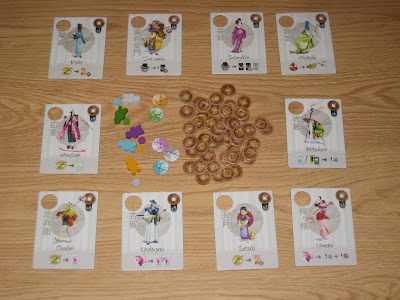 We now move onto the player cards.  These are absolutely beautiful!  Each of the ten characters has their own cardboard card with a small hole in it.  This hole is where you place your color token so you know what color each player is during the game.  On each of the cards is a gorgeous rendition of the character and below that is the icon of the player’s power.  These were a great addition to the game and I love that they were printed on thick cardboard instead of just putting them on cardstock. 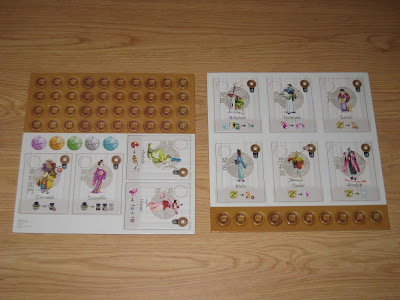 Lastly I just want to point out the insert of Tokaido.  Publishers take note…this is how an insert should be done!  It is made perfectly where each of the components/cards/boards has a specific well that they go in and it keeps them so nicely separate from each other.  I love when thought has gone into the inserts of a game.  I understand that it isn’t necessary thing to have a nice insert, but it is a nice addition. 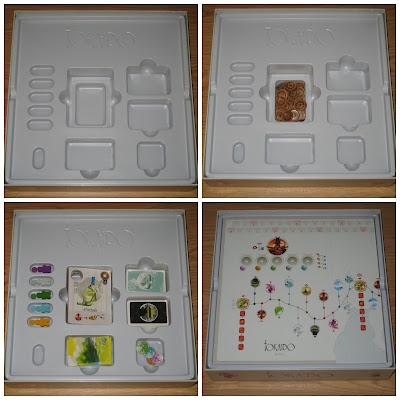 Thanks for reading everyone!  This has been an interesting process as I’m finally going back through all of these game pictures and doing the unboxings that I’ve been sitting on for far too long.  I have some good games coming up during the next week so check back in tomorrow for the next one!  Thanks again for reading and let me know if you have any questions or comments.  Until next time, game on!