Day three and now we get to move onto the final part of my top 10 game interests of Gen Con 2015.  These are the top 5 games that I will be looking forward to (or already ordered) as they are debuting at Gen Con.  Take a look and see if any of these are interesting to you, as at least a few of them will definitely be entering my collection.  Also, if you haven’t had the chance yet, please check out my previous two posts in the Gen Con 2015 series.  They focus on my honorable mentions and games 6-10 of the top 10.  Just click the links below and enjoy!

With that out of the way, time to move on to my top 5 game interests at Gen Con 2015.  These are the games that I am most interested in and I’m hoping that the top 3 will be in my possession as a friend of mine, Morgan, will be picking up a few for me while he’s there.  So sit back, relax, and enjoy my top 5 interests of this year’s Gen Con. 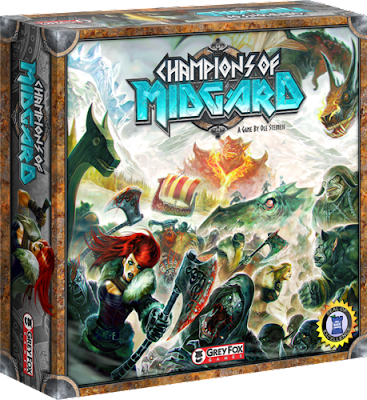 Champions of Midgard is a dice rolling, set collection, and worker placement game designed by Ole Steiness and released by Grey FoxGames.  This game really came out of nowhere for me until I really started to study Eric Martin’s Gen Con 2015 preview list on BoardGameGeek.  It is mainly a worker placement game and I’ve heard from multiple reviewers that it has the same feeling as Lords of Waterdeep.  To start, the theme really hit me.  I don’t have any Viking games but I do find them to be very interesting.  This one has a light to medium weight and I think I’d be able to pull it out with newer gamers and everyone have a great time.  On a side note, this year really seems to be year of the Vikings! 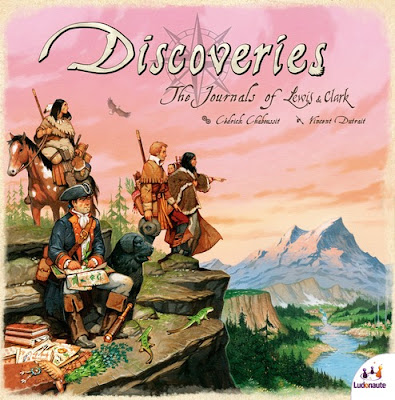 Discoveries is a pool building, dice rolling, worker placement game designed by Cedrick Chaboussit and released by Ludonaute and Asmodee.  This game is another that has art by the absolutely fabulous Vincent Dutrait.  This game just oozes with his absolutely stunning artwork and I have to say, it doesn’t hurt my interest when you bring on brilliant artists and let them work their magic on the game.  This is the follow up game to Chaboussit’s Lewis & Clark and it takes on a dice rolling mechanic that looks like a ton of fun.  Asmodee should keep up the good work; they keep finding and releasing great dice games such as Nations:The Dice Game which came out just recently.  Discoveries looks like it will be a great Euro-style dice game and I look forward to playing it. 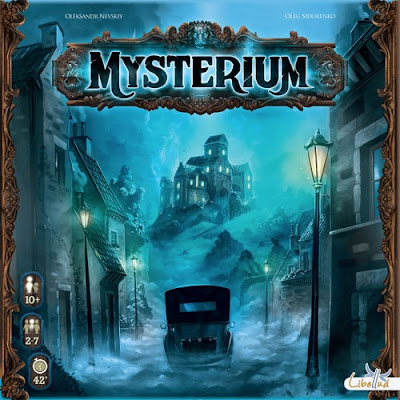 Mysterium is a co-operative, deduction game designed by Oleksandr Nevskiy and Oleg Sidorenko and released by Libellud and Asmodee.  This was originally a Ukrainian game that Portal Games released in Poland as Tajemnicze Domostwo.  It was a huge hit at last year’s Essen Spiel and then Portal opened up their version to other countries as their store will ship almost anywhere.  Now, Libellud picked up the English rights to the game and they will be releasing it in conjunction with Asmodee as Mysterium.  They changed up some of the art and some of the components (including adding an amazing player screen for the one playing the ghost) but mostly the game has retained its original rules.  In this game one player takes on the ghost character and plays cards in front of the other one to six players who are attempting to find the actual killer of a murder from many years ago.  I haven’t heard anything bad about this game and the new Libellud version looks awesome!  On a side note, this is one of the games that I’m hoping my buddy is able to pick up!  There aren’t many copies but I’m hoping he’ll be able to pull this one off. 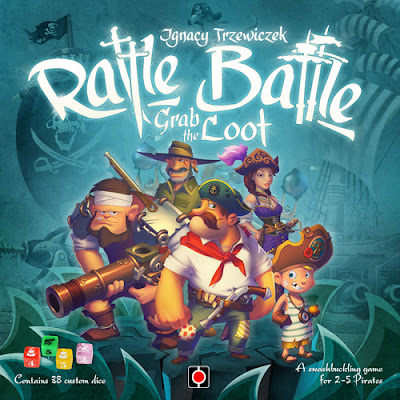 Rattle, Battle, Grab the Loot is a dice chuckin’ game designed by Ignacy Trzewiczek and released by Portal Games.  For those of you counting, there are three releases by Portal Games on my top 10 list.  I will readily admit that I am a Portal fanboy and I look at all of their releases as possible purchases.  I have all three of their Gen Con 2015 releases on pre-order and Morgan will be picking them up for me.  Rattle, Battle, Grab the Loot is a game with some of the most beautiful components that I have seen in a long time.  There is a ton of great, custom, etched dice in different colors and even more great cardboard pieces that you are able to put together and form your ships.  There is some great artwork done by multiple artists on this game.  It is cartoony and absolutely great.  The art really adds to the theme and the fun of this game.  This game uses a dice rolling mechanic where you actually toss them into the box lid and fight in that area.  It is a clever mechanic that I think will work really well with this game.  This game will be in my hands in about a week as this is one of my pre-orders (the others are Imperial Settlers: Atlanteans Expansion and Tides of Time) from Portal Games.  I can’t wait! 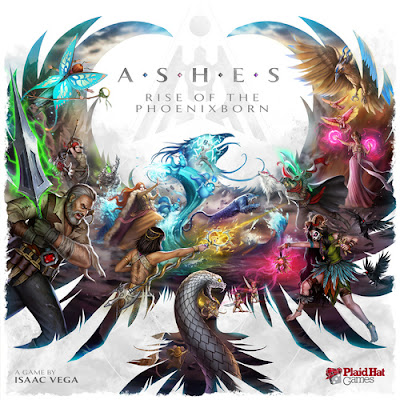 Ashes: Rise of the Phoenixborn is an expandable card game designed by Isaac Vega (of Dead of Winter fame) and released by Plaid HatGames.  This is another game that really snuck up on me.  It only really hit my radar around the time of Origins Game Fair.  I had heard Ashes but wasn’t really interested until I really started to see the artwork done by the incredible Fernanda Suarez who also did art for Dead of Winter.  I have been interested in starting up a 2-player battle game (i.e. Magic: The Gathering) for some time but I really am not interested in collectable card games as they can cost so much just to find some decent cards.  I think that the battle decks for Magic: The Gathering are cool but I didn’t think they’d have a ton of replayability without buy a bunch of them.  This game is a battle card game with six different characters (seven with the promo character!) and six different created decks straight out of the box.  Along with the amazing cards are some absolutely gorgeous, etched dice.  These dice are used as “resources” for your different allies, conjurations, and spells throughout the game and it is really streamlined with a main action and side actions per turn.  I can’t wait to break this one out and play with my wife!  I actually have this one already as I pre-ordered it and just got it, but I haven’t gotten it to the table as I’ve been at work all week.  But, hopefully I’ll get to play this one in the next few days.

Well, there are my top 5 game interests of Gen Con 2015.  I am sure that I’ve missed a few but I feel that this is a pretty strong list.  Keep an eye on my blog as I’ll be posting one more Gen Con post at least that will be my top games from the convention that I’m interested that aren’t for sale.  I hope you enjoyed my list.  Let me know if you have any questions or comments and also, let me know what your top games for the convention are!  Until next time, game on!