This will be the first post my self-imposed Unboxing Week.  I will be doing a post a day for a week in order to get through some of the games that I need to do some unboxings on.  The first will be the wonderful StarWars: Imperial Assault designed by Justin Kemppainen, Corey Konieczka, and Jonathan Ying and released by Fantasy Flight Games.  This was a game that was high on my list after last year and it has totally lived up to my expectations! 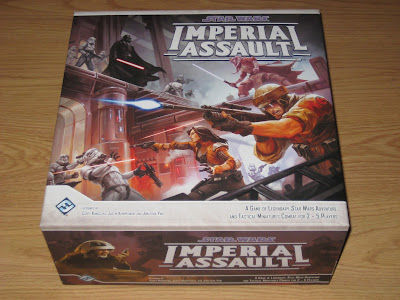 Star Wars: Imperial Assault was released last year after being demoed at Gen Con and Essen Spiel.  With all of the problems with the docking strikes in the west the game didn’t start shipping out to buyers and game stores until the end of December.  I had pre-ordered the game and it made it to our door just before Christmas.  This game is almost a re-skin of Descent: Journeys in the Dark but does a good job of changing and streamlining some of the rules in that game.  What was created was a great game with the Star Wars IP.  This has become a regular for my wife, me, and a good friend of ours.  We are over half way through the campaign and it has been a blast! 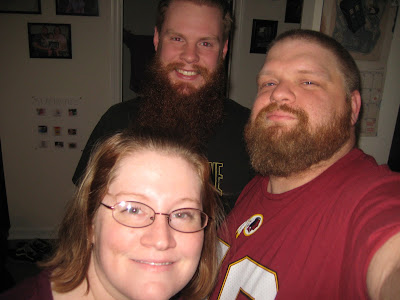 To begin, this game is actually two in one!  The “main” part of the game is the campaign mode.  In this game you are given missions and one person plays the Imperials while the other one to four people play the Rebels.  Also included in this game is a two-player skirmish mode.  This takes different (in some cases) cards and gives you a certain amount of points to create your team.  There are also different “game modes” or “missions” in the skirmish mode which keeps it more interesting. 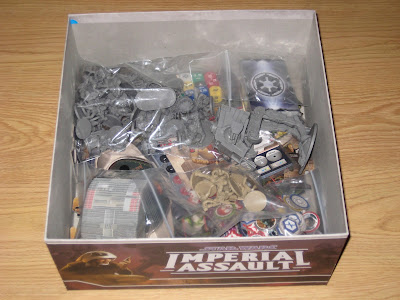 Okay, enough of the precursors, on to the unboxing and this game’s wonderful components!  Since this is a Fantasy Flight game it is pretty much guaranteed to have high quality and multiple components.  It is basically what they have become synonymous with in the gaming hobby.  Whether or not you like Fantasy Flight Games is beside the point, it is hard to argue with the point that they really put a lot of work into the look of the game.  That being said, this game continues with their high quality components. 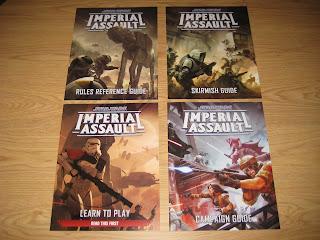 To begin with, this game comes with four, yes four, different rule books.  These include a learn to play rulebook, a campaign guide, a skirmish guide, and a rules reference.  I will say that these are all wonderfully put together and have great examples and pictures to go along with the rules.  Fantasy Flight has recently really started to put in a learn to play rulebook and this just gives an intro mission which shows the players how to play the basics of the game.  I think that this is a fantastic idea because you can really jump into the game with that reference and start playing right away.  Also, I absolutely love the rules reference guide!  This is one of the best ideas I’ve ever seen for a game.  If we ever have a rules questions I can pull that guide out and I’m able to find everything that I need right there.  It is put together beautifully and all of the reference words make it easy to find what you’re looking for. 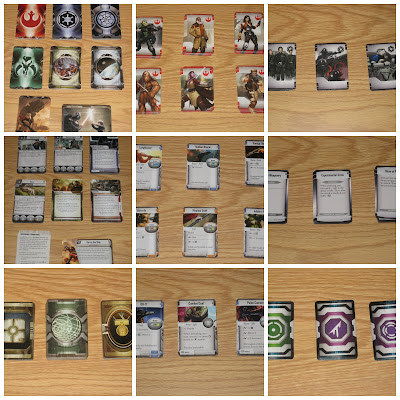 Next up we have a ton of cards!  There are over 250 cards that come with the game and they are in both that standard poker size and the mini-card style that Fantasy Flight loves.  These are super high quality cards that have the linen finish that I love in playing cards!  It really gives them a good heft and quality feel when you are holding/shuffling them. 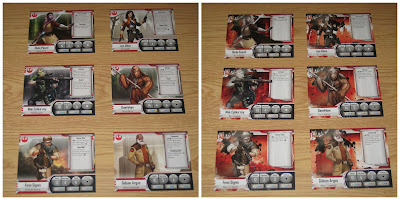 These cards include mission cards, equipment cards, character cards (both Imperials and Rebellion), upgrade cards, skirmish cards, and Imperial agenda cards.  There are so many different decks that it is somewhat difficult to keep them all apart.  Along with the cards there are six double sided character boards for each of the six heroes in the game.  All of the normal archetypes are in the game, including the rogue smugglers, the jedi-in-training, the grizzled veteran, the wookie warrior, the commander, and the long-range sniper. 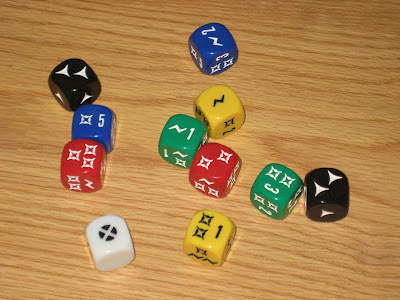 Another high-quality component that is included in the game are the die.  There are a bunch of different die (eleven in all) that are all custom and engraved for this game.  There are green dice, blue dice, yellow dice, red dice, black dice and a white die.  The green dice are a general attack die in the game.  The blue dice are more effective for long range attacks.  The yellow dice are useful for surges which give you extra powers during your attack while the red dice are good for raw power.  Lastly, the black dice are used for normal defense while the white die is used for defense/dodging attacks.  Each different weapon uses a different set of dice which makes them all good at different things.  It makes each weapon more interesting. 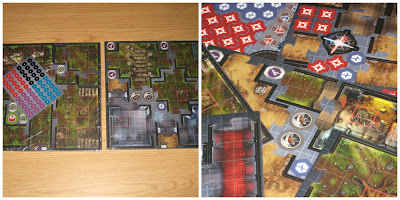 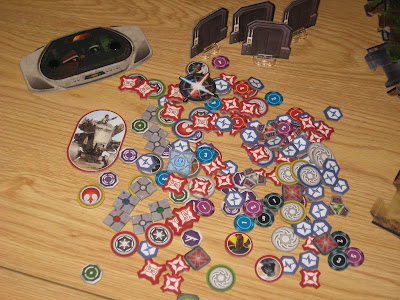 Next up in the line of components are the cardboard tokens, and wow are there a lot of tokens!  There are over 150 assorted tokens that come with this game and they do all sorts of different things.  Some of them are characters which are needed throughout the campaign mission but their miniatures aren’t included in the base game.   Some of them are status effects that occur at different points in the game.  Some of them are points of interest that are placed on the board during the missions.  Basically, there are a lot of very high quality cardboard tokens!  These are all very thick cardboard so you don’t have to worry about them being damaged during the game.  I also appreciate thick cardboard components.  Plus, I love punching out all of the different cardboard sprues! 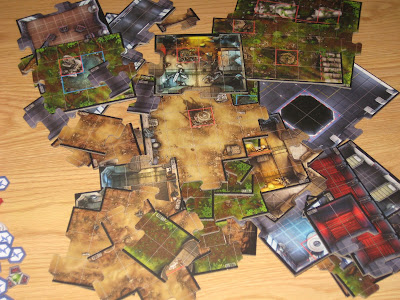 Along with the very high quality cardboard tokens the game comes with 59 different, double-sided cardboard maps pieces.  These are all of an amazing thickness and the artwork that has been applied to them is of the highest possible quality.  The sheer amount of tiles that have been included with the game gives such a large possibility of map combinations.  There are a ton of different campaign missions that are included with the base game and they all use the double-sided map tiles to their best effect.  I haven’t really played a two maps that look the same as of yet! 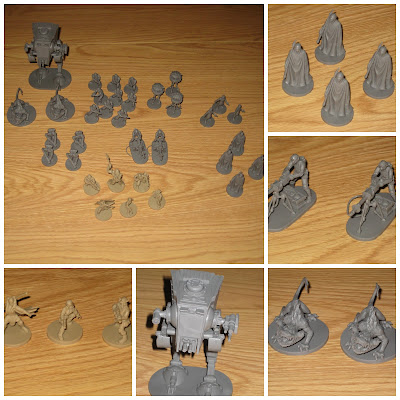 Finally, we can’t talk about the components in this type of game without talking about how amazing the miniatures are!  This game includes 34 very highly detailed miniatures (36 if you count the Darth Vader and Luke Skywalker expansions that are included) that are amazingly done!  You get each of the six Rebellion heroes, an AT-ST walker, probe droids, nexu creatures, Trandoshan hunters, Imperial Guards, stormtroopers, commanders, gun placements and the characters of Luke Skywalker and Darth Vader.  These miniatures are all of hard plastic composites and are very well done. 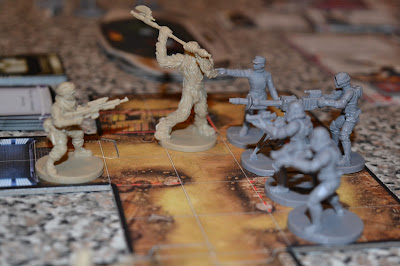 This game comes in a fairly standard size box in length and width (Ticket to Ride size) but it’s depth as nearly twice the size of other games.  It also includes that standard piece of crap insert that Fantasy Flight seems to like to add into their games.  This particular insert went into the trash as soon as the game was opened.  I would highly recommend baggies and boxes in order to keep the different tokens, tiles, miniatures, and cards as separate as possible.  I have a nice box that is keeping my tokens and dice all neatly separate and ready to roll when we pull the game out.


To end, this is a super fun, campaign style, one-versus-many game that we have already gotten a ton of hours of fun out of!  This is not only a fun game to play but also a wonderful game to look at!  Fantasy Flight obviously put a lot of work into this game and it really shows.  I can’t wait to play our next mission!  Go Imperials!  Thanks for reading this post and stay tuned over the next week as I’ll be doing an unboxing each day.  Until next time, game on!