For my second unboxing post I have chosen the brand new game (technically still “unreleased” until Essen Spiel 2014) by the fantastic Antoine Bauza entitled Samurai Spirit.  Bauza is known for such games as 7 Wonders, Hanabi, Takenoko, Tokaido, and Ghost Stories.  These are all very different games which really show the range of Bauza’s design. 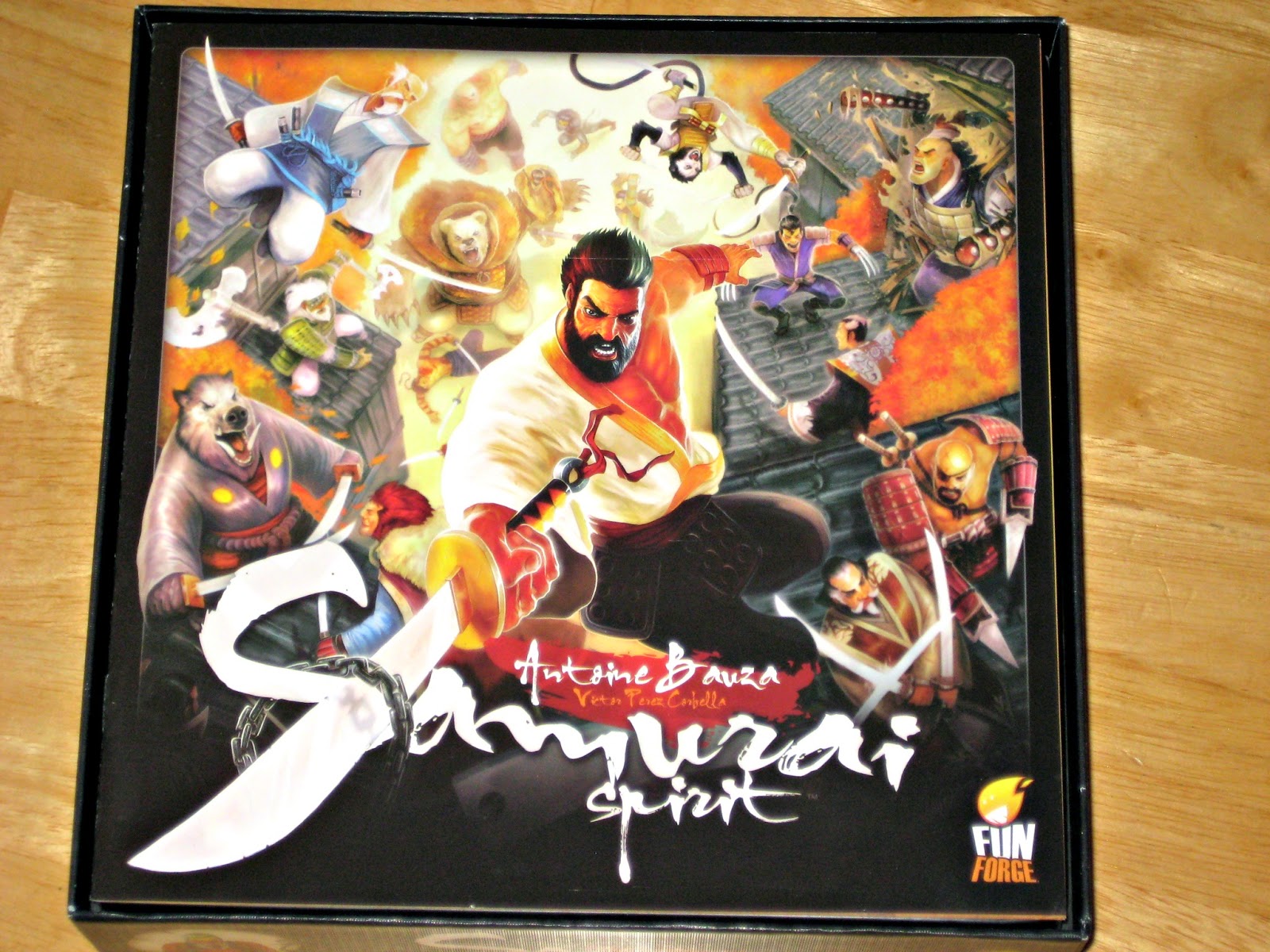 Samurai Spirit is a co-operative adventure where you take one of seven samurai and fight off a horde of bandits as they attempt to loot and raze a small village.  You are trying to fend off the bandits over three rounds and you want to save at least one house, one family, and stay alive.  This is no easy task, as Bauza is well known for his difficult co-operative games!

A good friend of mine was able to pick this game up for me at Gen Con 2014 as Funforge (the game’s publisher) brought 300 copies for early sale.  Along with the game they included a promo card that was an eighth boss for the final round of play.  This card is an especially mean card that has some nasty penalties for those samurai that don’t deal with him quickly! 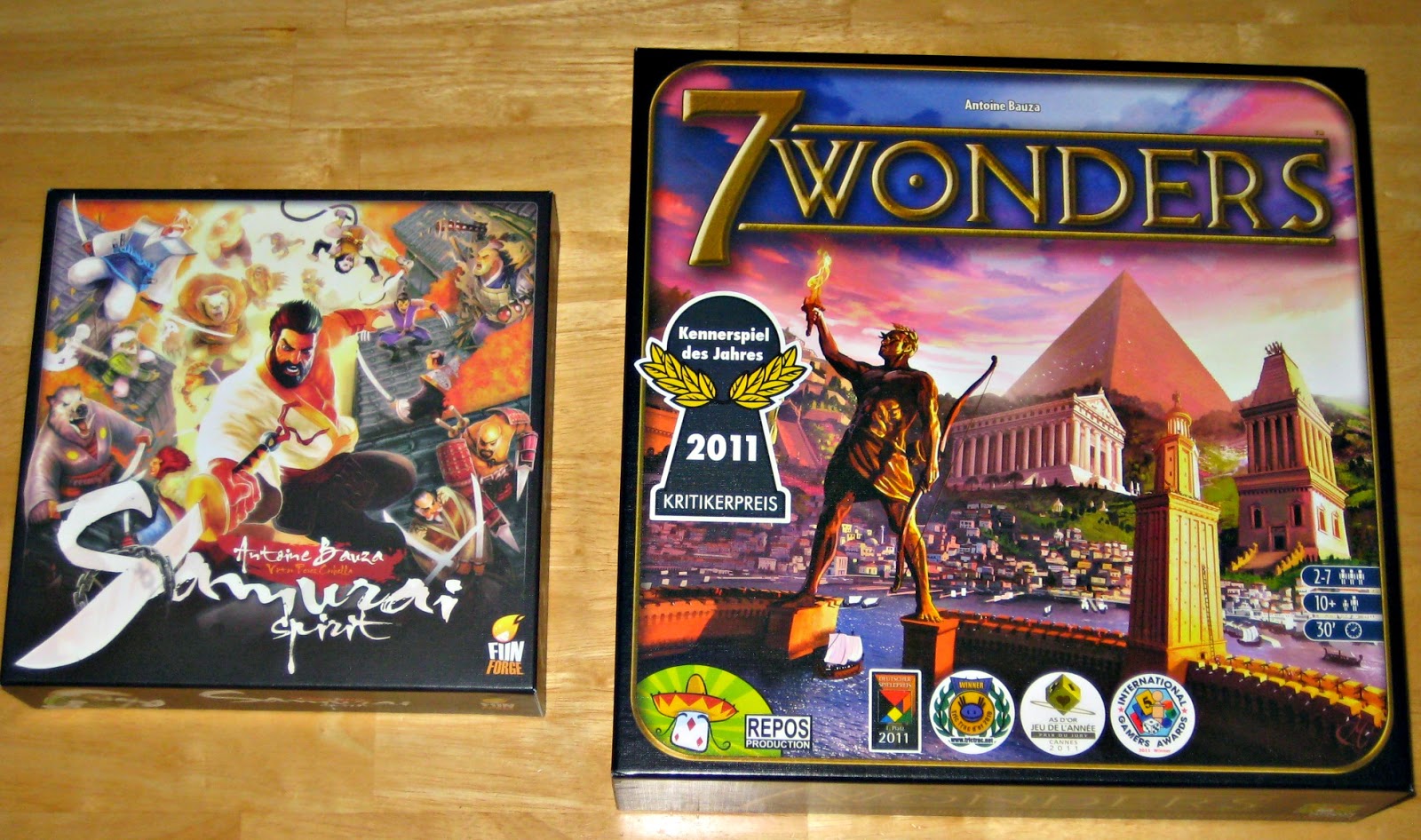 The first thing I noticed as I picked the game up from my buddy was that it was much smaller than the typical game on my shelf.  This box is less than half the size of a “normal” sized game such as 7 Wonders.  This made me a little nervous at first but I pushed that aside as I know that Funforge is well known for their excellent component quality.  When I opened up the box it was obvious that my hesitations held no weight.  There weren't tons of components, but each and every one of them were beautiful and of great quality.  The box came with cards, game boards, an unpunched token board, and a rule book. 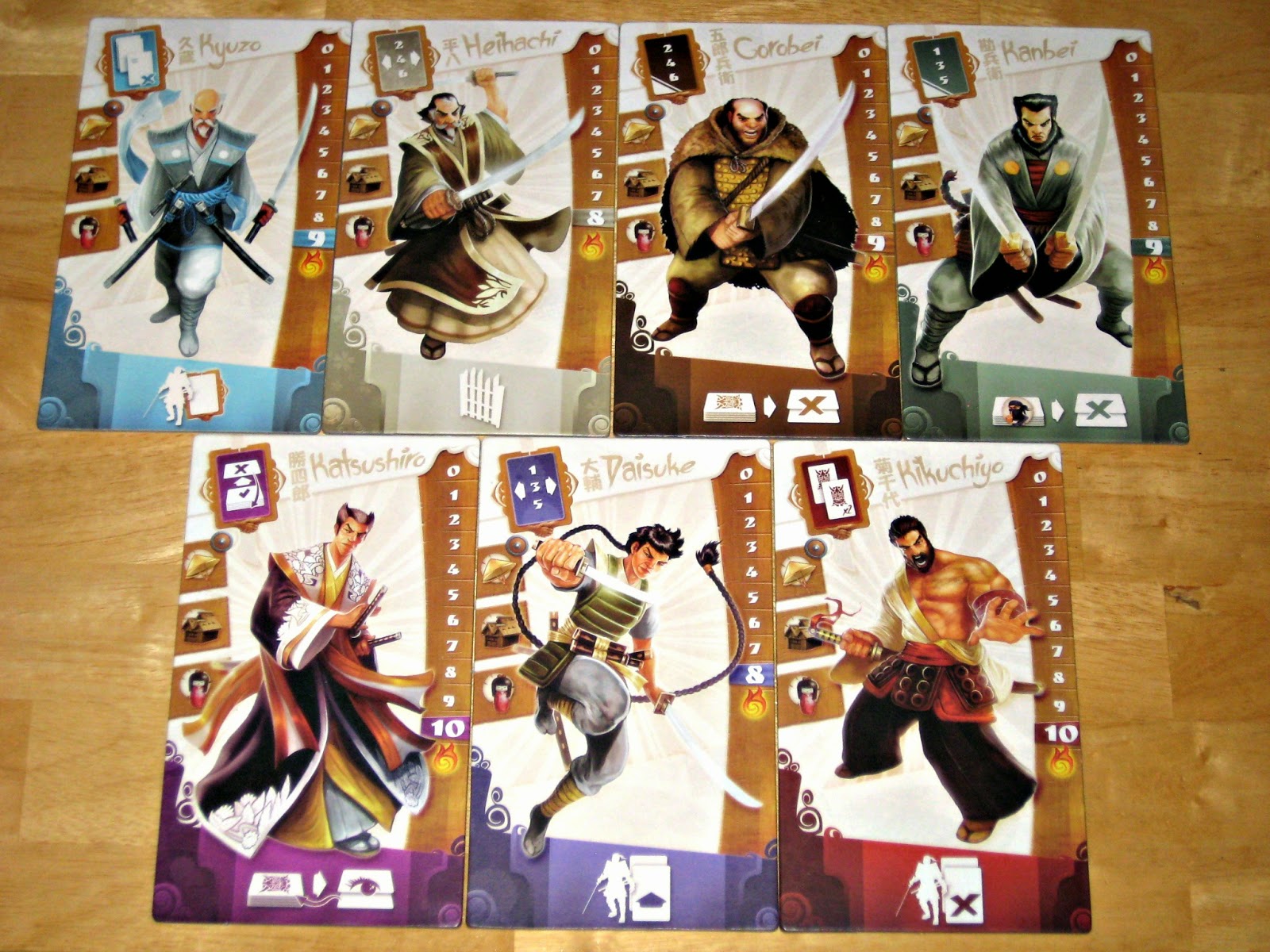 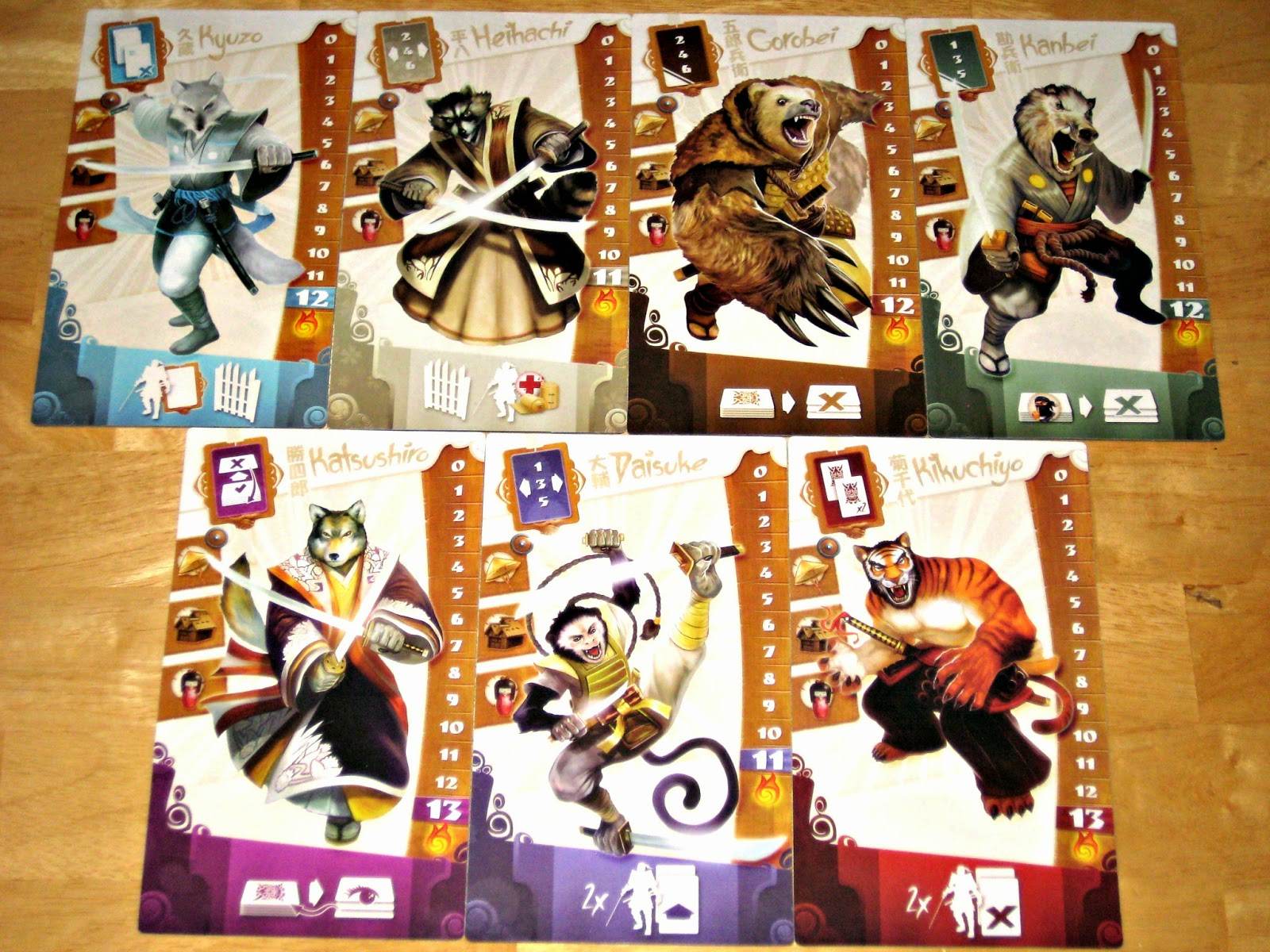 To begin with, the game has seven player boards (above).  This is where the “majority” of the game will be played as they hold all the information you need about your character.  Each of the seven samurai (yes, this game is a nod to the exceptional 1954 movie by Akira Kurosawa entitled Seven Samurai) has their own power that they may unleash and/or share during the game.  Each of these boards may then be turned over to show the “beast mode” of each of the samurai.  This is a more powerful version of the samurai that may be unleashed during the game. 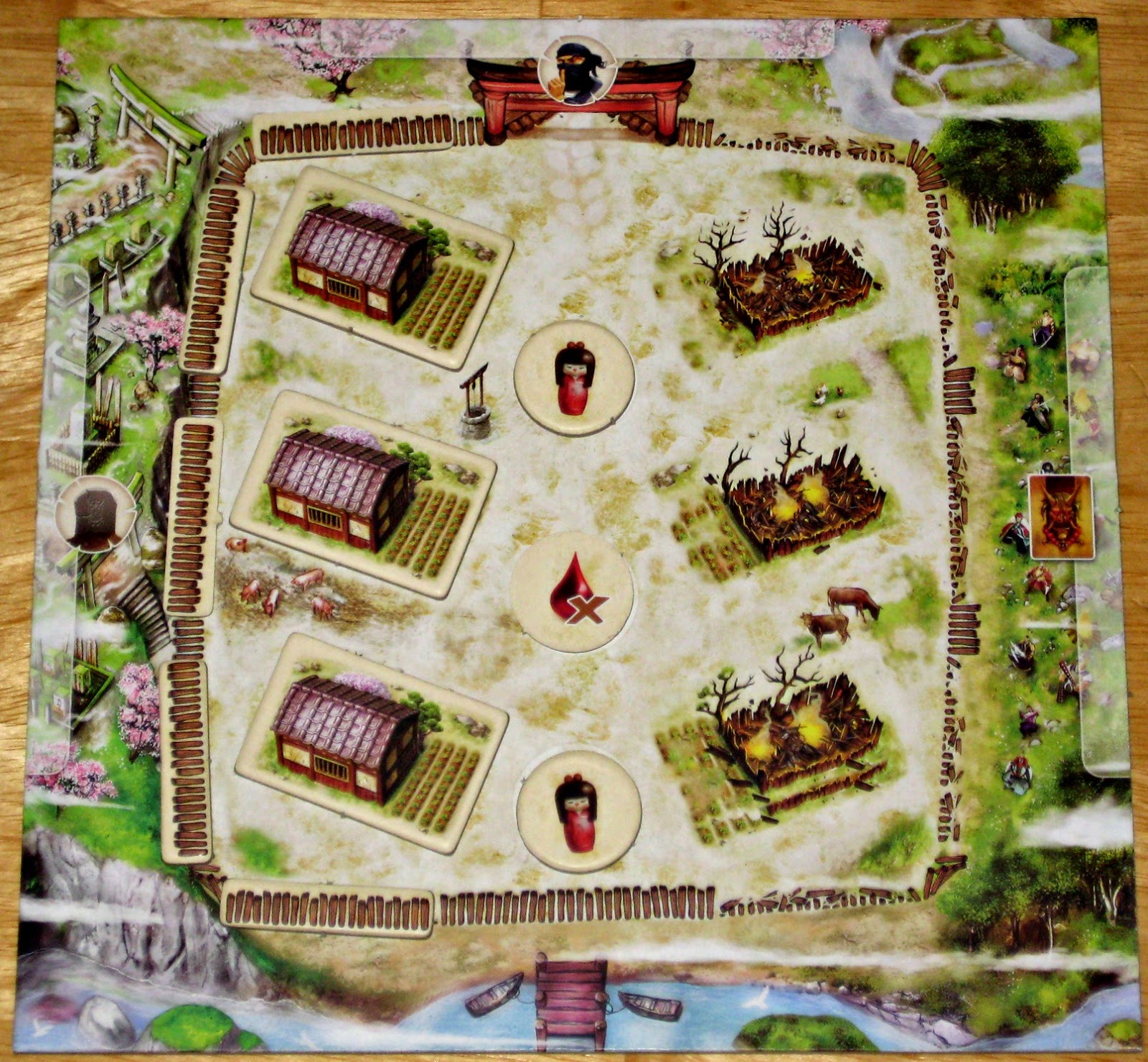 Then, you have the village board (above).  This is a simple village picture where you have six house tokens, three family tokens, and a certain amount of barricade tokens depending on the amount of players.  The tokens will be removed as families are killed by the bandits or as houses/barricades are burned.  Then, on the right side of the board you will place your bandit card deck.  Above the village is a place for your bandit cards that have snuck by the samurai.  Finally, there is a spot of the left side of the board where you place the bandit discards which represent defeated bandits. 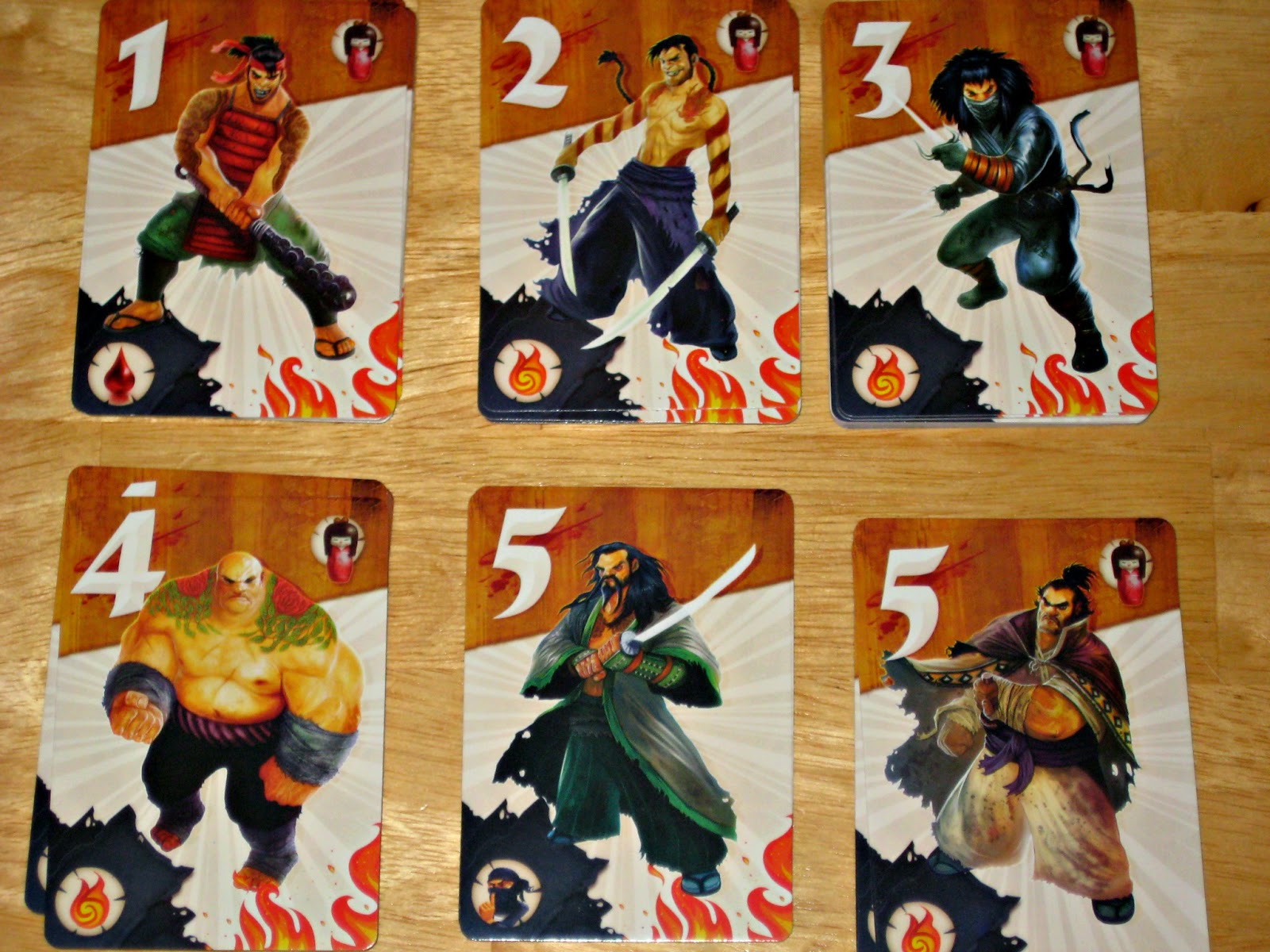 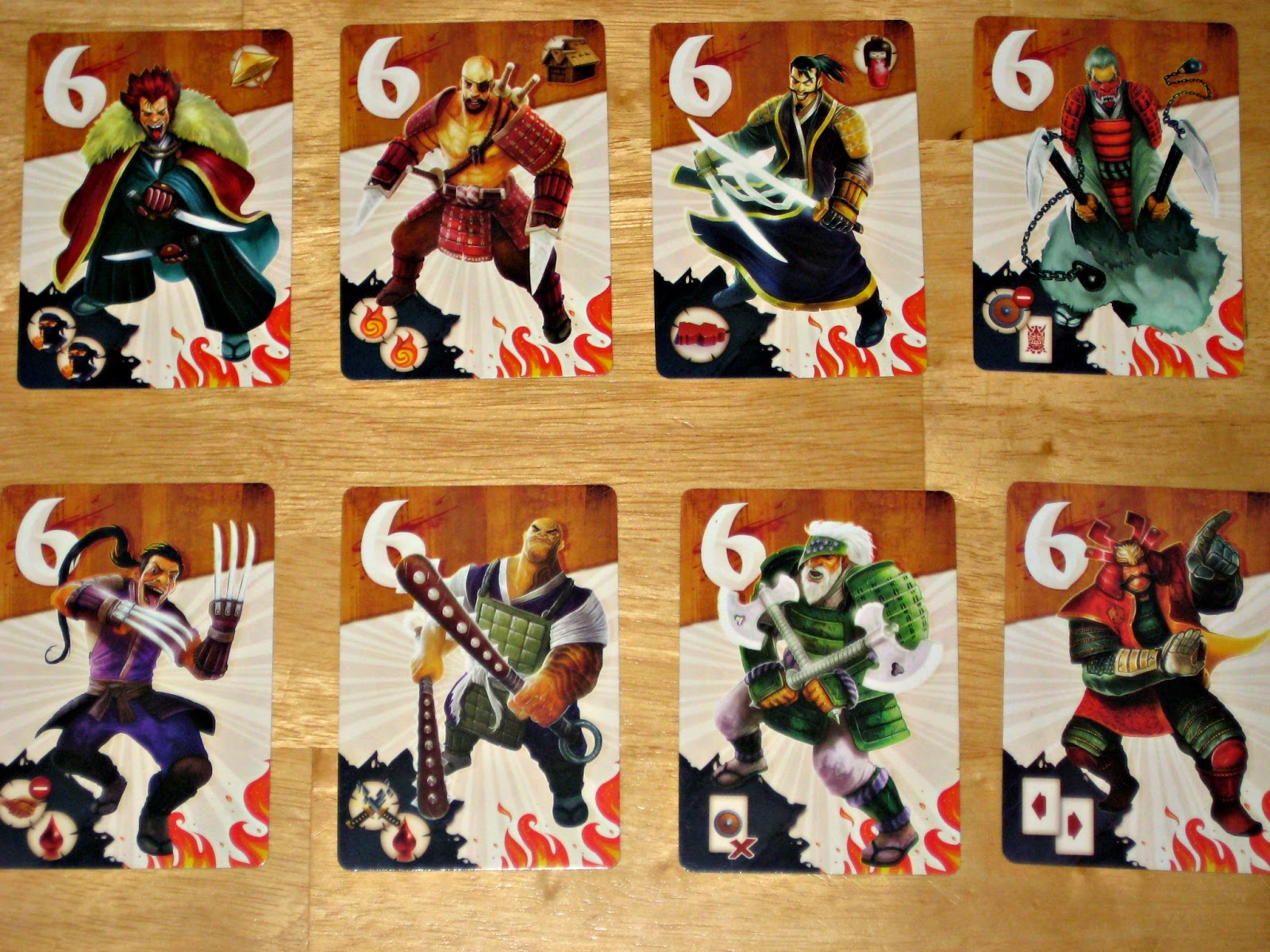 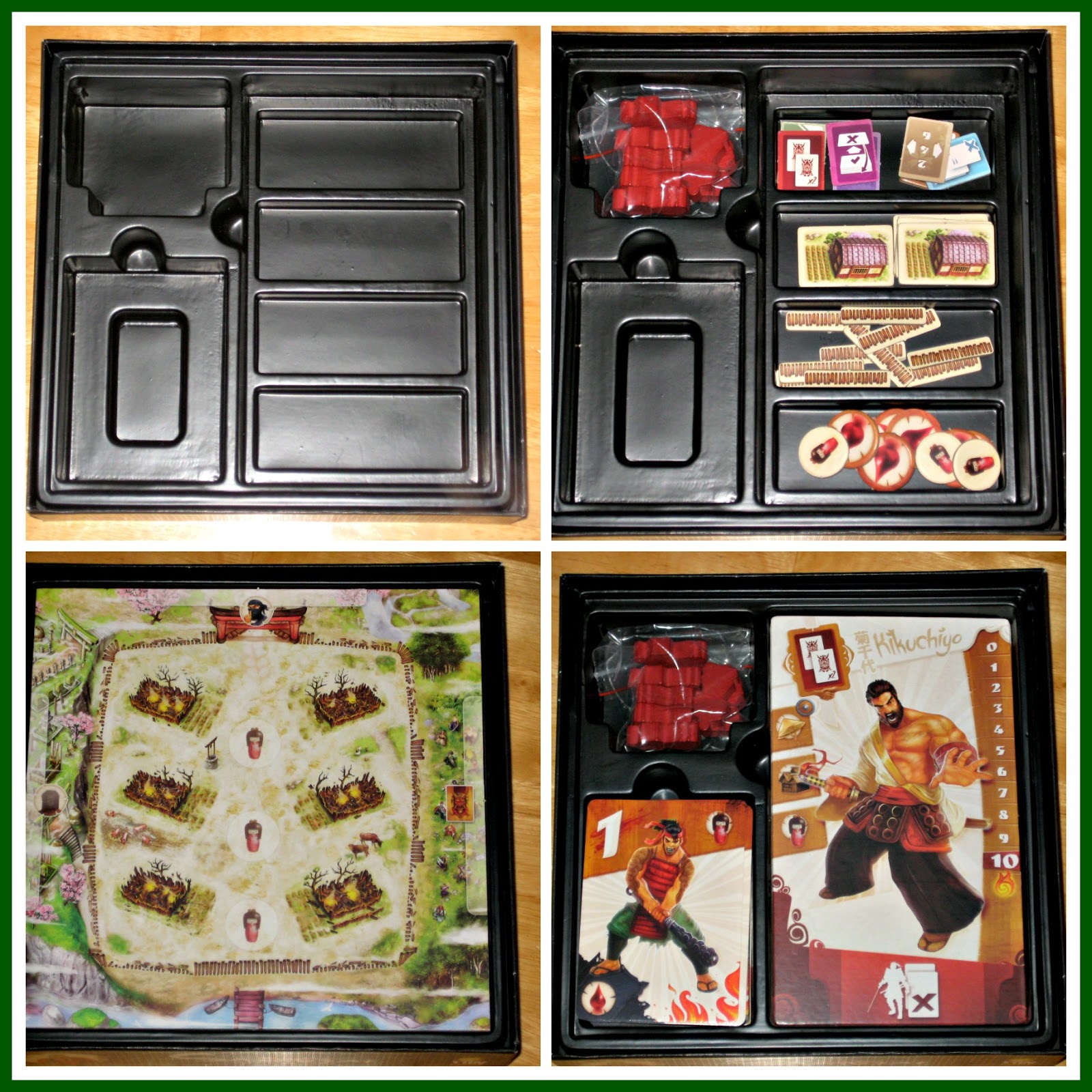 Lastly, I should mention that this game has an excellent box insert designed for storing all of the components of the game. It is a well-molded plastic that holds everything perfectly.  My wife knows how much I love this simple idea in gaming.  Come on publishers, make good inserts for your games, it isn’t hard and it makes for happier gamers!  That being said, this game is the perfect example of a well-done box insert!  Bravo Funforge, you’ve done well! 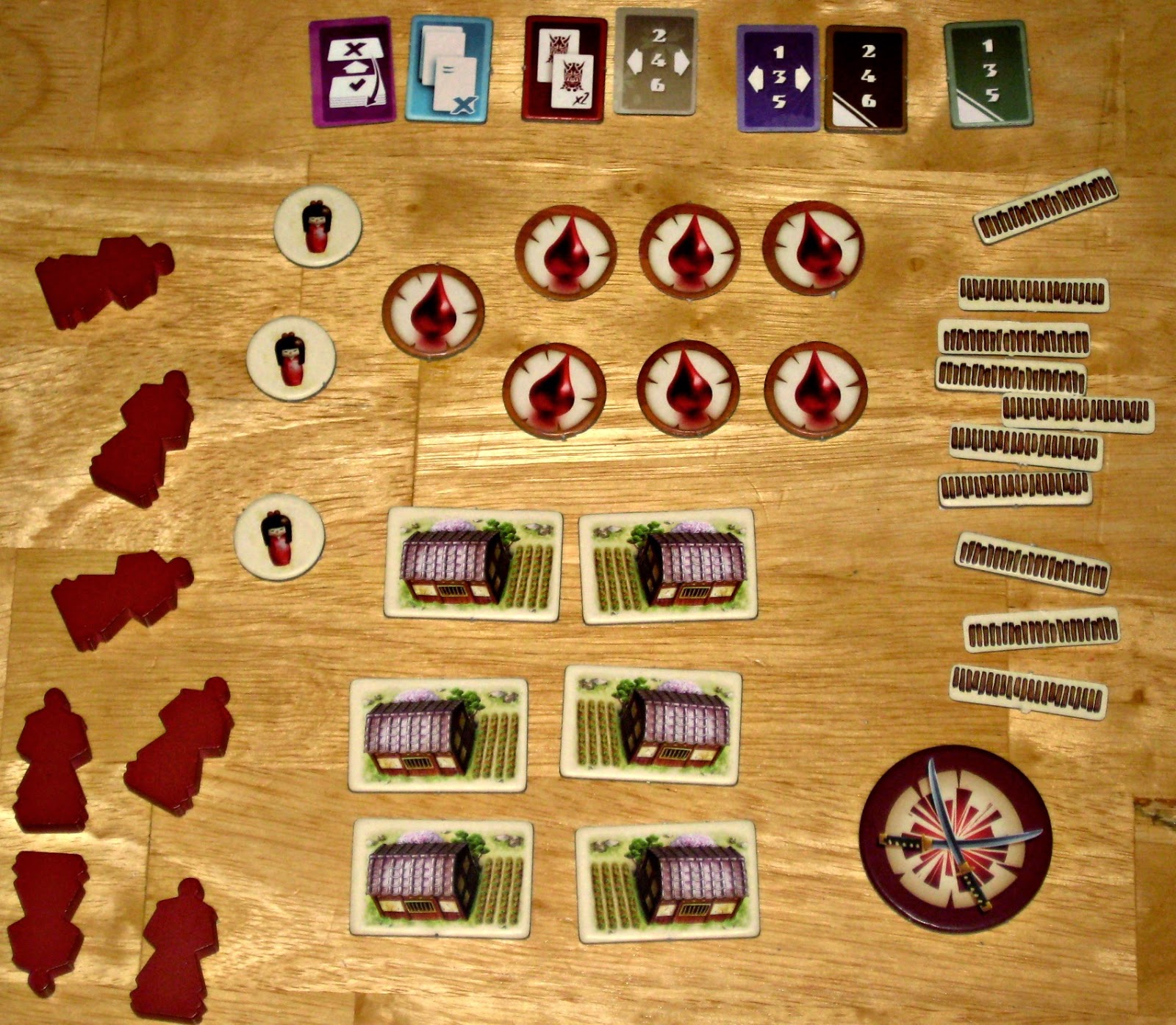 Oh my gosh, I almost forgot to mention the amazing samurai-shaped meeples that are included with the game!  They are an awesome addition!

So, needless to say at this point, the components and the box insert in this game are spot on!  This is definitely a game that screams quality over quantity.  While there aren’t many components, they are all so well thought out and well crafted that you don’t miss the ridiculous amounts that are in other games.  Also, after a few plays and really getting the rules down, I am loving this game!  Well, I suppose that’s all for now, until next time, game on!