What follows is the second chapter in the story of the fantastic dungeon crawler Mice & Mystics by Plaid Hat Games.  Em and I took the past two nights and went through this scenario in the game and to be honest we rolled for crap the first night.  We actually didn't even make it out of the second tile before we were overrun by a bunch of roaches.  In a stroke of brilliance we decided to change our strategy as we replayed the chapter the second night.  We chose to change up the mice we played and that ended up being the difference between winning and losing. 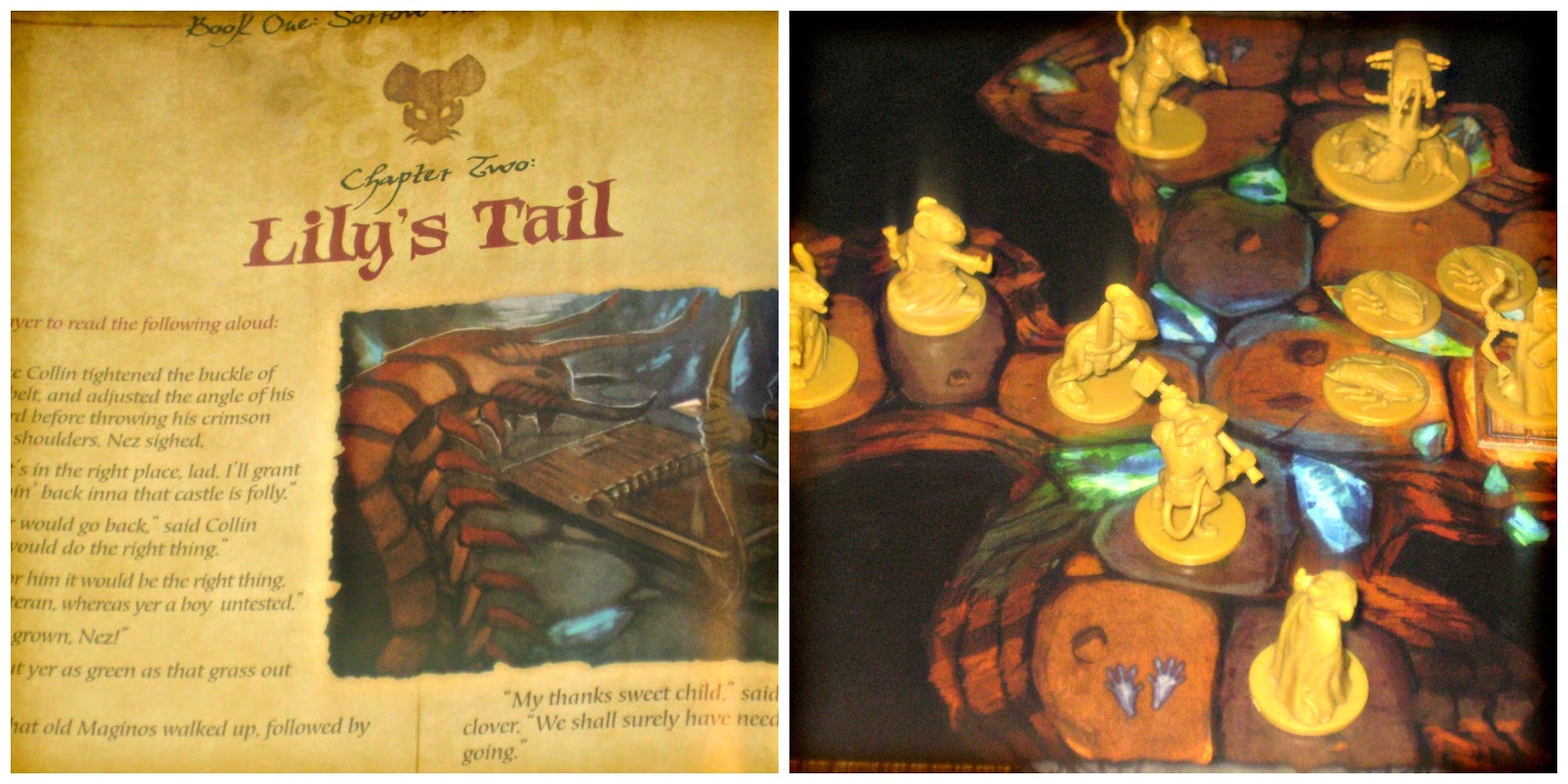 For this scenario Em chose to play with Maginos the mage and Tilda the healer.  I went with Collin the warrior prince and also controlled the rolling of Lily the archer even though we technically didn't have her in our party at first.  While the first chapter took quite a while for us to play through (about 2 ½ to 3 hours), this one only took us about 45 minutes to an hour to play.  Of course, at this point, we know how to play the game and were able to cruise through the dice rolling.  Thankfully Em and I rolled really well the second time through and with Em controlling a healer we were able to defeat the scenario.  Below is a summary of the story in chapter two of Mice & Mystics.

SPOILER ALERT!  If you are ever planning on playing this game you may not want to read ahead!  Otherwise enjoy the story.

Chapter Two: Lily’s Tail
After hearing the tale from the mayor of Barksbury, Linera, Collin is driven to help the mouse with her request to find her daughter.  He begs the help of his fellow travelers, Maginos, Tilda, Nez, and Filch and with quite a bit of hesitance (mostly from Nez and Filch) they all agree.  The group travels out of Barksbury and down to the entrance of the tree as a throng of mice await them, cheering them on as they get ready to exit the tree and move on to the dangers of the castle.  A young mouse brings a four-leaf clover and hands it to Maginos who thanks the child.

The group fights their way through some rat warriors and the old crow in the courtyard and enter the castle through a hole in the wall.  There they are met by a large group of hungry cockroaches but they make relatively quick work of the vermin.  At this point Collin and his group find a way up into the dining hall where they find a dinner fork that they think may be needed further on in their adventure.  Upon dropping back down into the caverns, the party moves on and finds themselves in a tunnel full of crystals.  Upon entering they realize that the glow from the crystals is not natural.  Maginos agrees with their observation but the group moves on.

Upon entering the cavern they see a small, lithe mouse struggling to free herself from a mousetrap that has been placed in the tunnel.  Collin shouts out to the group, “It’s Lily!”  As they run into the crystal tunnel their heads are suddenly filled with a vision.  They see a sickly, but beautiful young woman who is surrounded by Tilda’s healers who seem to be tending to her.  Filch poses a question of what the vision was to the group but Maginos, Tilda, and Nez push the question off for the time being as they rush in to help Lily.

That is the end of Lily’s Tail.  It was at this point that Em and I ran into the tunnels and came across a group of rat warriors and a centipede by the name of Skitter-Clak.  Em (controlling the mage Maginos) cast a spell which basically killed off Skitter-Clak as I (as Collin) rushed forward and released Lily with the dinner fork we found in the dining hall.  At this point, the four mice we controlled made short work of the remaining four rats and won the scenario.  Another fun play with my wife down, and next time we move on to chapter three, The Grapes of Rats.  Until next time, game on!