This past Sunday marked the final day of Gen Con 2014, to the sadness of some and the excitement of others.  I’ve actually been watching the live feeds from Board Game Geek during the entire duration of the event to get an idea of what is going on.  It has actually been quite interesting to see the feeds and watch as people start to look more tired and haggard by the fourth day of the gaming convention.  I know this post is a little later than I wanted but I am still obliged to finish off my top ten list from Gen Con!  What follows will be numbers one through five of my list. 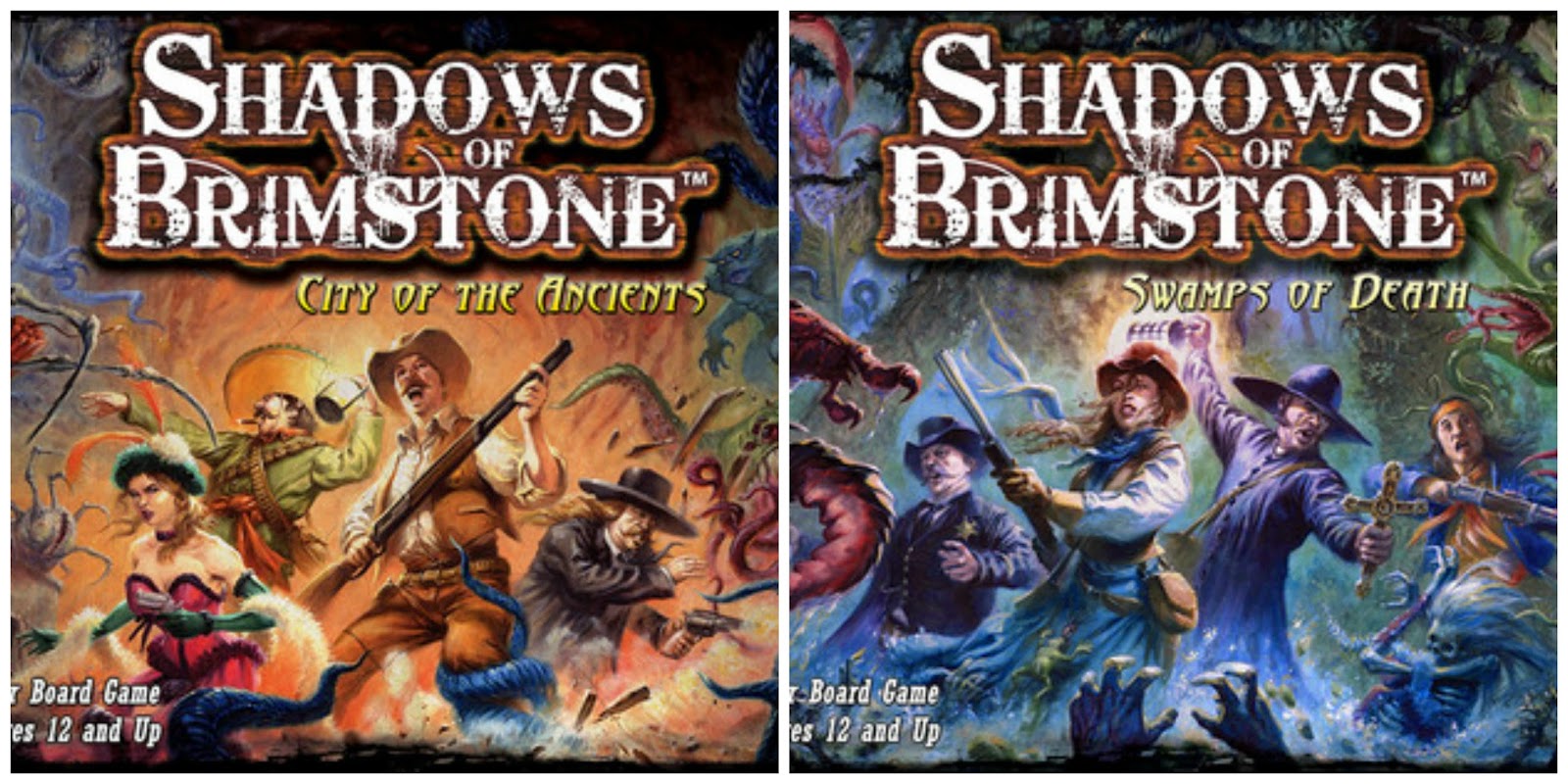 I am slightly cheating with this choice by choosing two games for one pick, but there is a legitimate reason!  Both of the Shadow of Brimstone sets are being released at the same time and they are both stand alone base sets that need nothing else to play than what is in the box.  I have seen some things from this game and I love what I’ve seen so far.  Shadows of Brimstone is best explained as a dungeon delver that takes place in a wild west theme.

What makes this wild west theme so interesting is that there is a great evil rising from the depths of the coal mines, an ancient evil and darkness that is threatening the entire area.  Basically this is a spaghetti western with a Cthulu overtone!  How could I not be super-interested in this?  I also love that this dungeon run is a fully co-operative game because it really makes it interesting for my wife as well.  I have been able to get her into gaming greatly due to the co-operative experience in said games.  This may not be a purchase for a while due to the price tag and due to the need to build models, but it is just a matter of time until Shadows of Brimstone finds its way onto my gaming shelf! 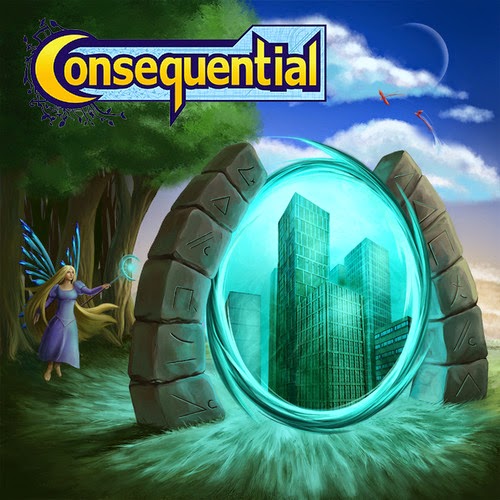 This game is a tough one.  To be honest I don’t know a ton about Consequential but what I do know highly intrigues me, enough to put it into my top five interests of the convention.  What I do know about this game is that it is another fully co-operative game that tells a story over four acts.  Each of these acts is contained within the box but they are packaged separately so that when they are opened they contain new cards, new locations, and new mechanics.  This game also takes the idea of preserving your character throughout the different acts and leveling them as you go.  I love this idea of persistence as it is becoming a huge mechanism in board gaming right now.  Consequential also contains an app that helps to tell the story of the game which I find very interesting.  While this is high on my interest list it won't be a must-buy until more information is released about the game. 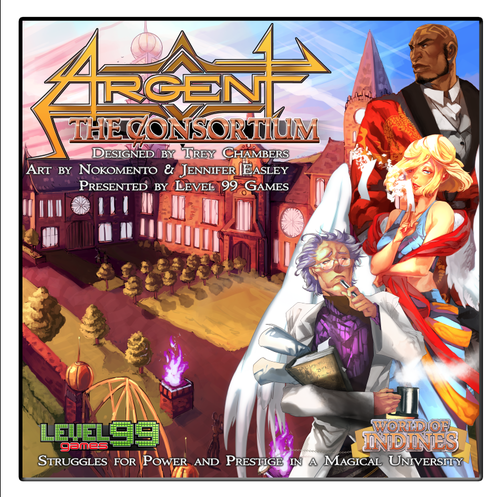 Argent: The Consortium is a new game release by the fantastic Level 99 Games and it has climbed its way all the way up to number three on my list!  This is a fantastic-looking game that takes place in Level 99’s World of the Indines.  This is a persistent world that they have used for many of their games including the well received BattleCon.  This is a big difference from the majority of the games put out by Level 99 in that this game heavily relies on Euro-mechanics such as worker placement.  What makes this different than other worker placement games is that the workers you place in different rooms each have a special ability.  This gives worker placement a new and fresh mechanism that creates a new way of thinking about your moves.  Because of the interesting gameplay, the beautiful artwork, and the persistent world of Indines, Argent: The Consortium makes its way into the number three spot on my top ten list. 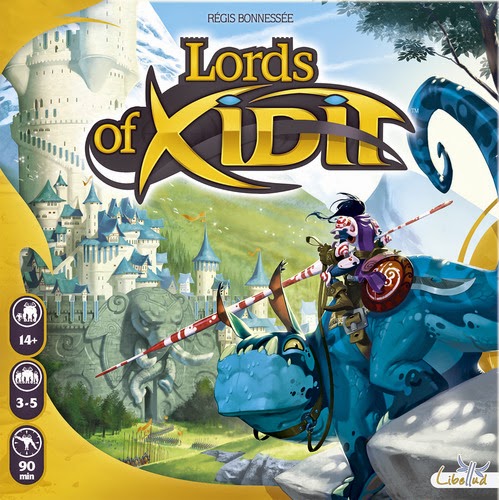 Lords of Xidit is an interesting game that has been re-themed and re-released by Libellud.  Formerly, it was a game called Himalaya by Regis Bonnessee and has now been re-themed and put into the world of Xidit.  Xidit is a world that was first realized in one of my current favorite games, Seasons.  Seasons is also a game by Regis Bonnessee so I suppose they thought it was be a good idea to re-theme Lords of Xidit into the same world as Seasons.  I have to say, from some of the early pictures that I’ve seen of this game I am blown away by the art just as I am by the art of Seasons.  While Seasons is a card drafting and hand management game, Lords of Xidit takes on programming and pick-up-and-deliver mechanics.  These are some mechanics that I don’t really have on my gaming shelf and would love to have them in this beautifully realized game! 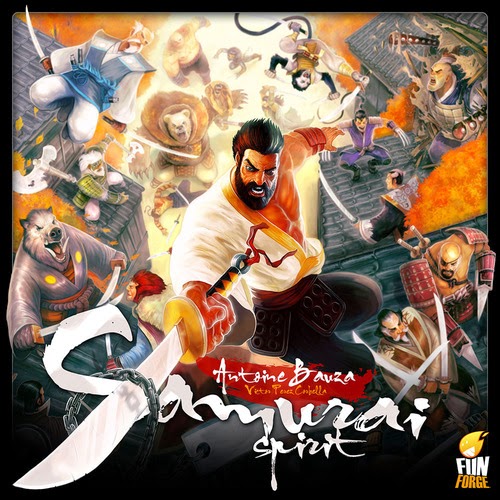 And my number one game interest of Gen Con 2014 is Samurai Spirit by the great Antoine Bauza and released by Funforge.  First of all, being released by Funforge, I have no doubt that the components and art will be perfectly integrated into the game.  Second of all, it is designed by one of my very favorite designers, Antoine Bauza.  This game seems to be a return to some of his older designs (i.e. Ghost Stories) and that is some of the best news I’ve heard!  Ghost Stories is a fantastic (and sometimes super-mean) co-operative game where you take on a role of a Taoist Monk trying to protect a town from an evil ghost dictator.  Samurai Spirit puts you into the role of a Samurai attempting to save a town from bandits.  I have seen some play from this game and it looks totally different from Ghost Stories while keeping his fantastic game design and slightly cruel nature of co-operative play.  This game seems mean and I love that!  At the time of writing this I actually have a copy coming to me before the release date of October or November.  A friend was at Gen Con this year and was able to pick this game up for me as well as a promo card for it!  I am so excited about this game and will be sure to do an unboxing when I receive it.

Thus ends my second half of my top ten interests of Gen Con 2014.  I hope you enjoyed these posts and were possibly able to see some games that interest you.  As always if you have any questions of comments feel free to post then at the bottom and I will gladly answer them.  Until next time, game on!
Posted by Unknown at 4:55 AM