Today marks the beginning of this year’s Gen Con, “the best four days in gaming.”  It is North America’s largest tabletop gaming convention, and according to them the largest in the world.  Regardless of the size it is a spectacle of the hottest games of the year.

Before checking out this list feel free to follow this link:http://www.alittlelatetothetable.blogspot.com/2014/08/obligatory-gen-con-post-part-i.html and read about my honorable mentions of the convention.  What follows will be the first half of my top ten list.  This post will include games six through ten and in the next day or so I will be posting the second half which will include games one through five. 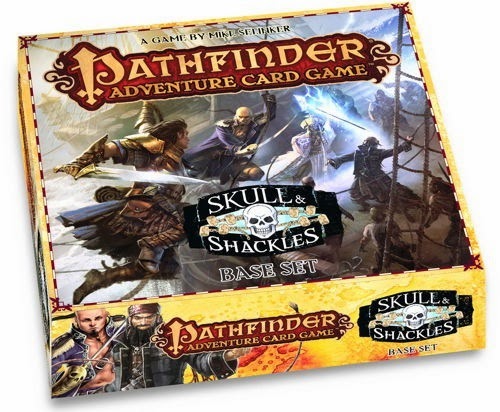 This is the follow up to last year’s hugely popular Pathfinder Adventure Card Game: Rise of the Runelords.  Paizo, the game company that releases Pathfinder, has really taken this game and made a great adventure out of it.  Em and I are currently working our way through the Runelords base set and we just finished the first adventure pack and have moved on to the second.  This set adds on more classes (including a swashbuckler and a gunslinger) and pirate ships to the mix.  The few previews I’ve seen make it seem like they’ve really upped the fun level in this set.  The only reason it isn’t higher on my list is because we are still working through the first base set and won’t get this one until we’ve completed Runelords.  That being said, Paizo is also creating more character decks so there is even more variability in the character selection.  I love what they are doing with this game and can’t wait to see what comes in the future for Pathfinder Adventure Card Game! In a similar vein of Pathfinder, Shadowrun: Crossfire is a co-operative deck building style game where you and friends take control of your characters and fight through obstacles and villains.  This is by Catalyst Game Labs and the theme is really what drew me to it.  The Shadowrun world is a cyberpunk world that also contains magic and the like.  The mechanics make it different enough that it doesn’t seem that it will take the same niche as Pathfinder does.  I love co-ops and I’m love the theme.  For these reasons this game has made it onto my top ten interests of this year’s Gen Con. 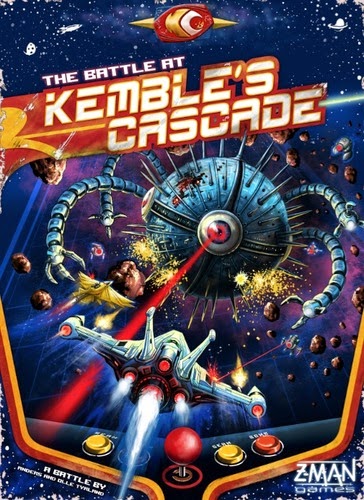 The Battle at Kemble’s Cascade is a game that takes the old arcade top-down space shooters and turns it into a tabletop experience.  I love this idea so hard!  I am a child of the 80’s and have always been an avid gamer so this one hits every button perfectly!  The game is playable for 2-5 people and includes all the ideas of those classic shooters.  Each of the player ships can be fully upgraded and can get power-ups all through the game.  While you are the other players are shooting up the alien hordes, they are also getting more powerful and bringing in the “big bosses” that I remember so fondly!  The theme is perfect, the mechanisms sound perfect, and it is being put out by Z-Man Games which means that the components will be top notch!  An easy choice for the top ten! 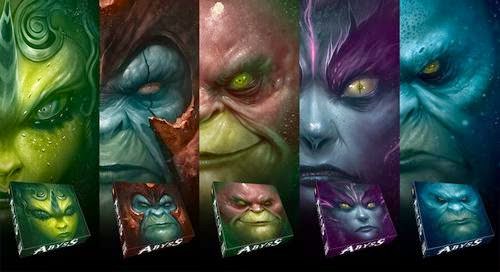 Abyss is a set-collection and hand-management game put out by the highly touted Bruno Cathala and it boasts some of the most beautiful artwork that I have ever seen in a card game…period!  This game is contained within a theme that seems somewhat pasted on, but the artwork is so beautiful that I truly can’t find fault in it.  With a gorgeous look and some mechanics that I haven’t really gotten into but really want to, this game has pushed its way onto the list and up to number seven! 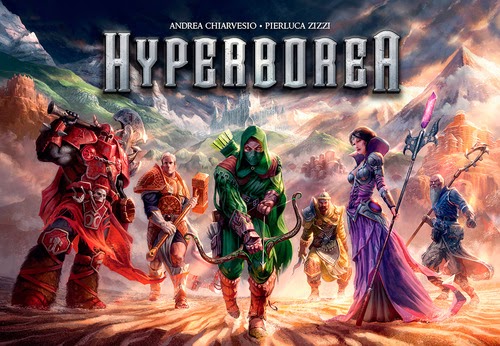 Another Asmodee game makes it onto the list at number six.  Hyperborea is another beautiful looking game that relies on area control, worker placement, and a newer idea that they call “bag-building.”  In this you have little cubes that represent workers with different “powers” that you place on the board.  This is a similar mechanism to deck-building, where you use the cards you start with to buy and create a new and stronger deck.  Instead of cards however, you have your cubes that are placed into a bag which you draw from during the game.  I find this to be an incredibly interesting mechanism and one that I think I’ll enjoy.

An added bonus is that there is a certain level of luck which means that my wife will probably enjoy it as well!  She like games with strategy to a certain point, but she loves it when they have an element of luck, at least when they are player versus player.  This is also considered to be somewhat of a light “civilization-building” game which we don’t have much of right now.  Between the mechanisms of the game and the beautiful components (one of Asmodee’s specialties!), Hyperborea makes it into number six on my top ten interests of Gen Con 2014.

That concludes my number six through ten.  Think these are good looking games?  Think something else should have been mentioned?  Any guesses to my next five?  Post comments, I gladly welcome conversation!  Stay tuned, in the next couple of days I will have my top five game interests of Gen Con 2014.  Until next time, game on!
Posted by Unknown at 5:35 AM