And now for the big payoff!  This is the fourth post in my “Obligatory Favorite Games 2015 Edition” series.  Before reading this post, feel free to check out the first three.  The first post is a guest blog from my wife who counts down her top 5 games.  The second post is my first favorite games post, my honorable mentions.  Finally, the third post is the bottom half of my top 10 games list.  Check those posts out at the following links:


Also, I love to pimp my wife’s blog at www.tastymess.org.  There you’ll find her wonderful writing with a foodie/recipe-sharing theme.  Also, she blogs about the appetizer recipes she uses at our game nights.  Now, shameless plugs aside, on to the top 5 games on my favorite games list! 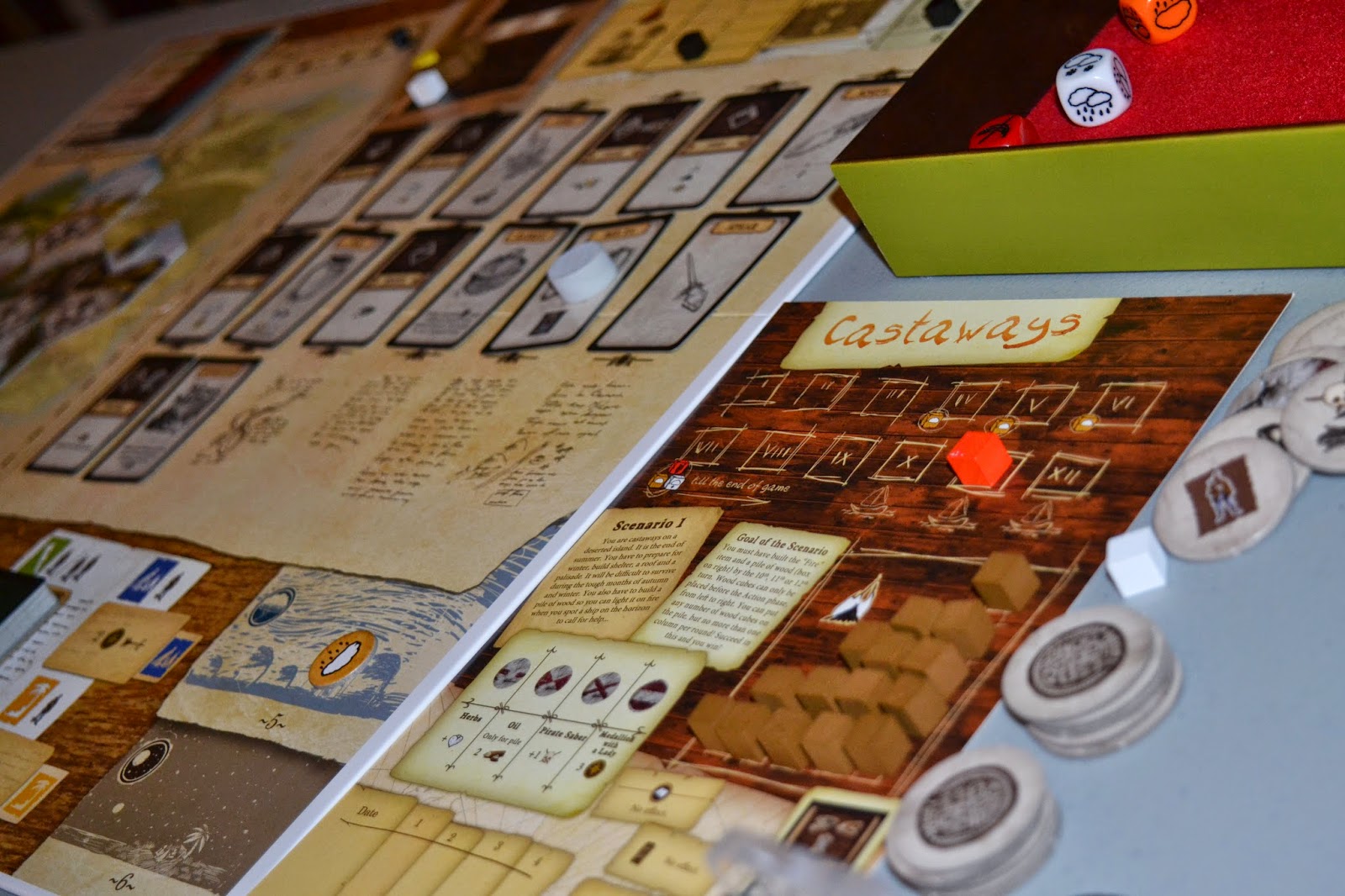 The first game to be mentioned is an incredibly thematic, co-operative game called Robinson Crusoe: Adventure on the Cursed Island.  This game was designed by Ignacy Trzewiczek and is (spoiler alert!) one of two games he has designed on my top 5 list.  I think this game does a great job in mixing the thematic flavor of Ameritrash-styled games with the mechanics of a Euro-styled game. This game does a fantastic job in immersing you in the theme.  Every time I play Robinson Crusoe I feel the tension as I’m trying to survive on an island that I’ve been stranded on.  This is a common idea in Trzewiczek’s games as he tends to start with the themes and build upon them.  This is why he has many successful games, and Robinson Crusoe is just one of his great designs!  On another note, this game now has an awesome looking expansion by the title of Voyage of the Beagle.  This is a five scenario expansion that places you on the ship with Charles Darwin as he researches flora and fauna.  I own it but haven’t gotten this expansion to the table yet but I can’t wait! 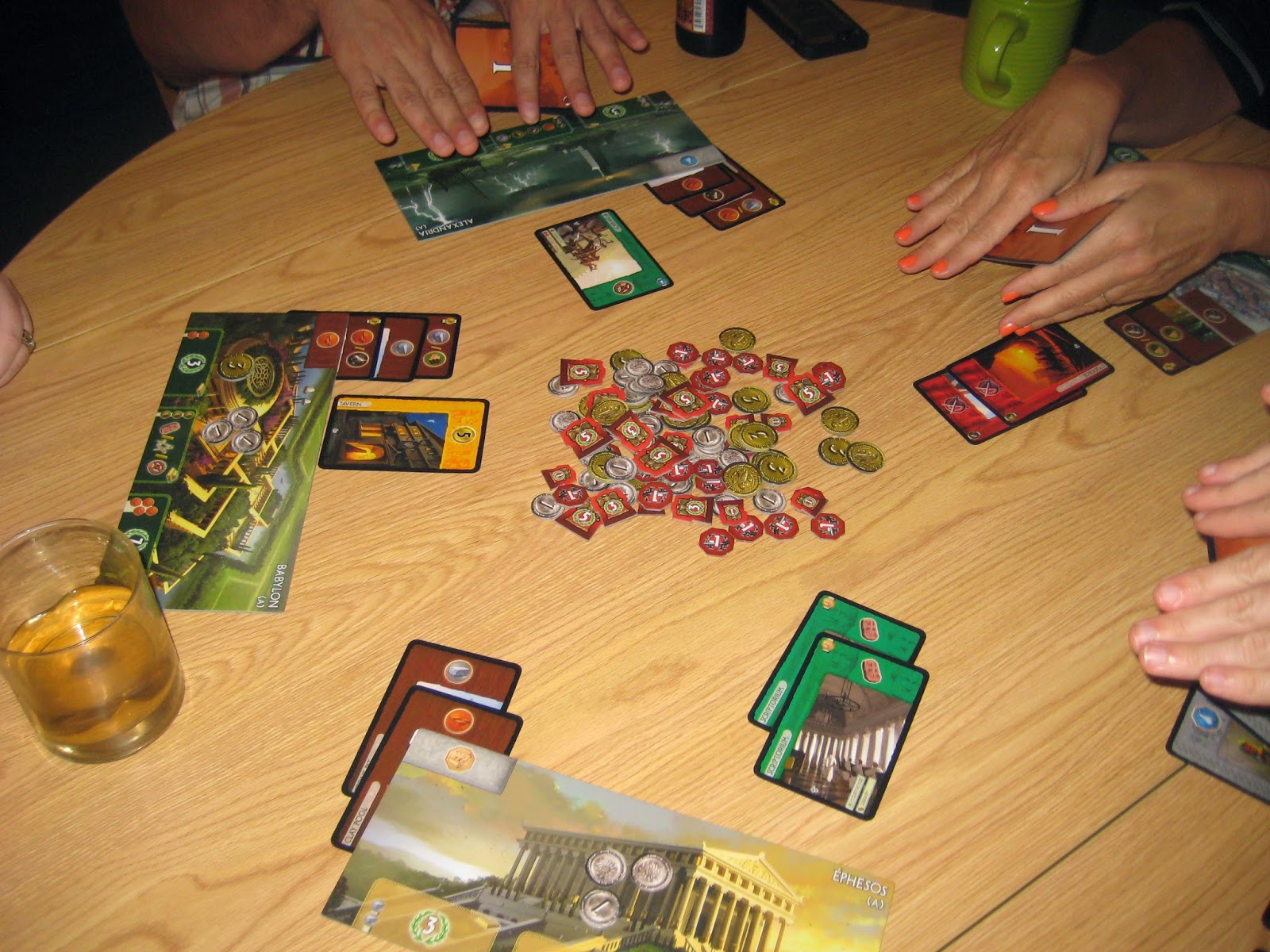 7 Wonders is a game by the consistently great designer Antoine Bauza.  This game really helped to push the game mechanic of card-drafting into major game design.  Now, card-drafting is a common mechanism and it is one of my favorites.  This is the first “card-game” in my top 5 and you will find that it is a common theme.  I absolutely love card-driven games and really love it when I get to build a tableau with them!  This is the first of three (spoiler-alert!) games with the tableau-building mechanic and this is one that I’ve played a ton and it never gets old!  You get three ages with six rounds each where you draft a card and place it into your tableau.  I love that this game is winnable with whatever route you take.  I’ve won with military, sciences, public buildings, and guilds!  This is a great game with three expansions thus far, Leaders, Cities, and Babel.  The latest expansion, Babel, looks awesome and I hope to obtain it relatively soon to add it to our games! 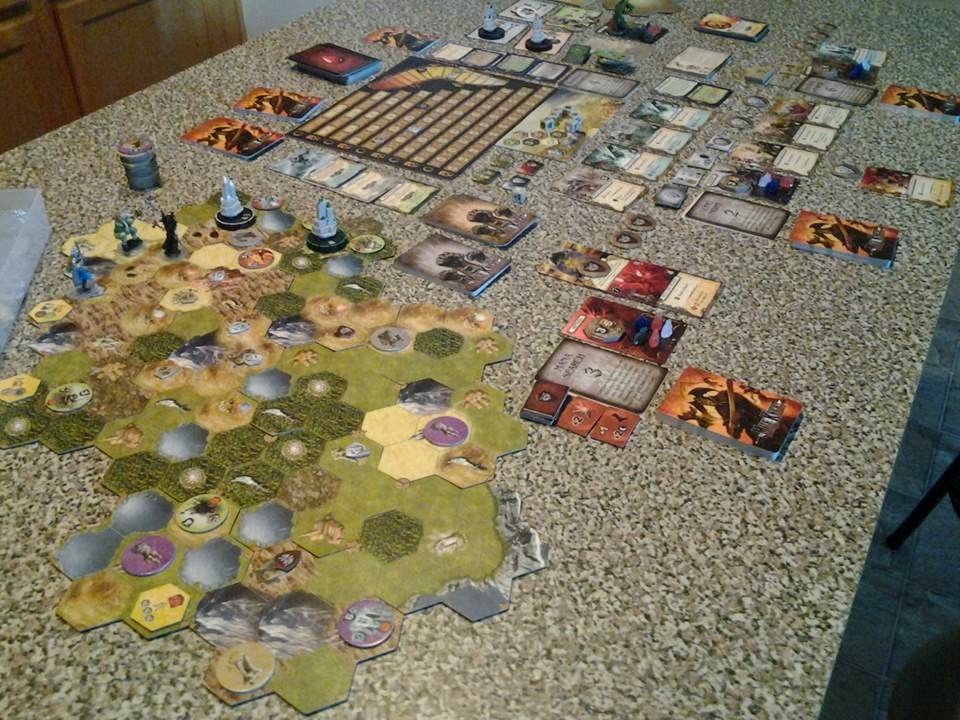 Mage Knight Board Game is a board game by the fantastic Vlaada Chvatil.  This is an implement of the miniatures-styled game Mage Knight also released by WizKids in 2000.  Chvatil created such an incredible game with this IP!  It is somewhat hard to really describe what this game is/does as it has a bunch of different mechanics that just come together is such a beautiful way!  This game is another that melds Ameritrash with Eurogame so well!  The theme is there and it has beautiful card-driven mechanics.  You use these cards to does movements, attacks, blocks, spells, and other cool things.  I think that this game would probably be higher but it is a very lengthy game and takes a long time to set it up and tear it down.  There are two expansions out for it now, The Lost Legion and the Krang Character Expansion.  There has just been a third expansion that has been announced and should be out this summer or by GenCon at the latest! 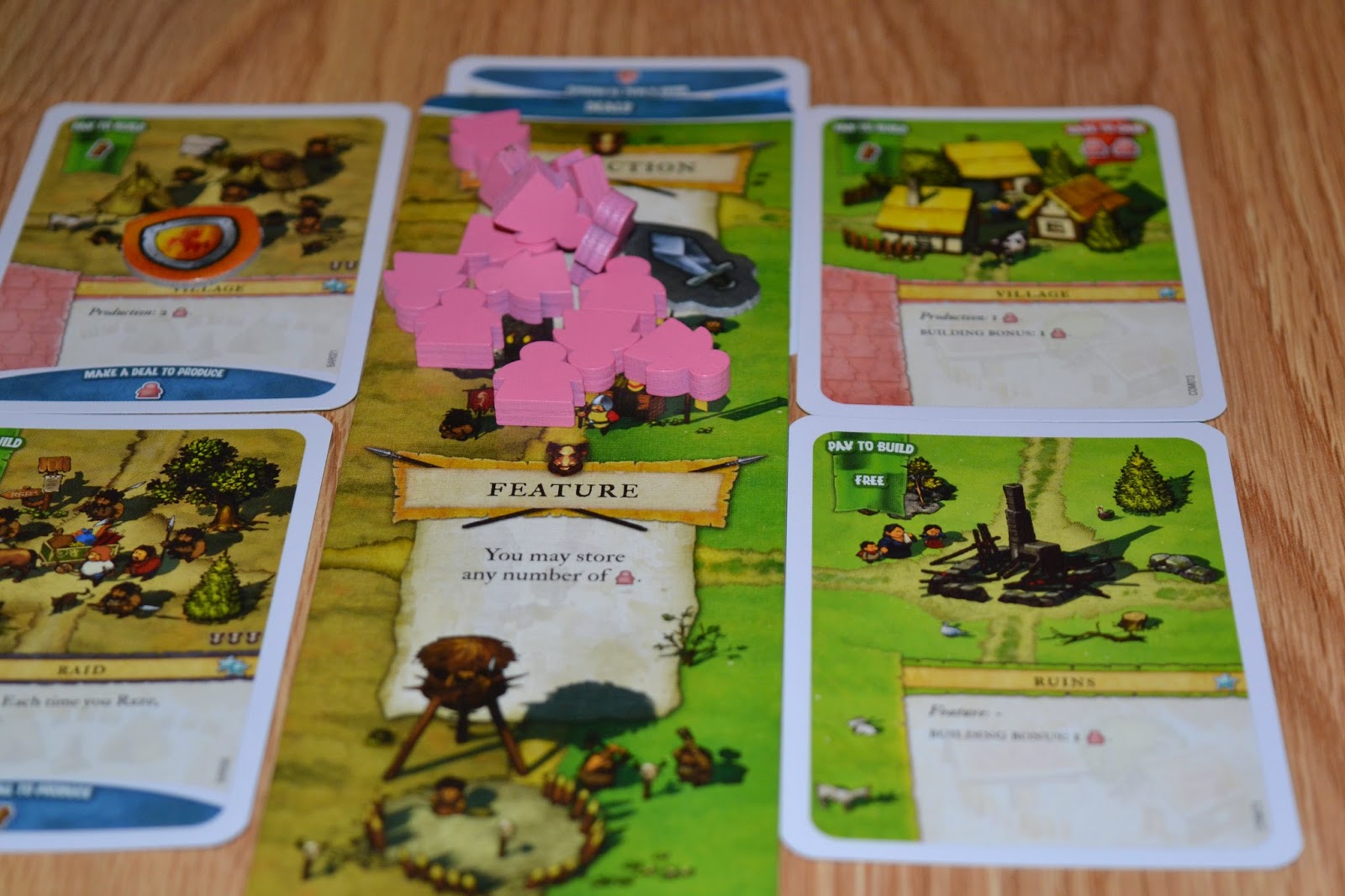 Imperial Settlers is the second game by the fantastic Ignacy Trzewiczek that makes its way into my top 5 list. This is a re-implementation of Trzewiczek’s engine building games, 51st State and New Era.  He took the ideas that he created in these games and really streamlined the mechanics into this wonderful game!  This is another tableau-building game that has a minor civilization building theme.  You have a deck of common cards as well as a desk of faction specific cards.  These faction specific cards really give flavor and replayability to this game.  Each of the four factions, Egyptions, Romans, Barbarians, and Japanese, has a very different feel to them and I love playing each one of them!  As well as being a super-fun game, this game also has beautifully fun art by Tomasz Jedruszek.  There is already a small pack expansion entitled, Why Can’t We Be Friends, out now and Trzewiczek has stated that there will probably be one more small pack expansion and one large expansion with a new faction coming out this year.  I can’t wait for more cards and more factions for this game!  It can only improve an already amazing game! 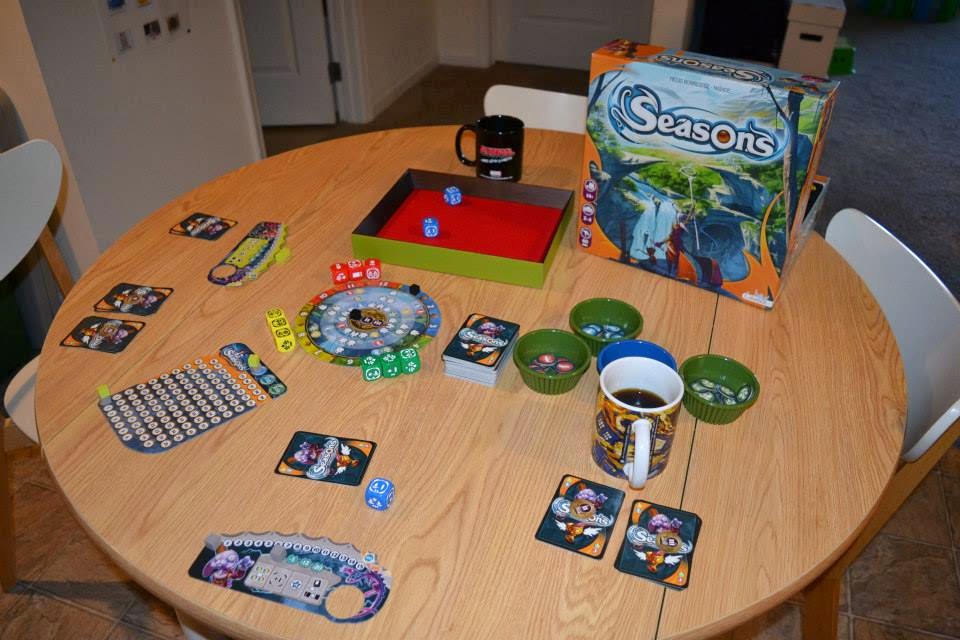 And my current, favorite game is Seasons by Regis Bonnessee.  This is just an awesome game.  Spoiler alert!  If you haven’t check out my wife’s top 5 games list, this is her number 1 game too.  We both absolutely love this game.  It is the third game on my top 5 that is a tabeau-building game that is card-driven.  But, unlike the other two games, this one also has a very important dice-drafting mechanic.  You roll these big, chunky, absolutely beautiful dice and then each player drafts which die they would like during their turn.  You use these die to do your actions each turn and then use resources (called energy in this game) to put out the magical items and the magical familiars that you drafted in the beginning of the game.  This game just hits all of the great things that I love in gaming!  For those who love expansions (like me!), this game also has two already out.  The first was Enchanted Kingdom and the second was Path of Destiny.  The best thing these expansions do is adding more cards (and thus more replayability) to the game while also have some new mechanics if you choose to use them.  Seasons is a great game with absolutely gorgeous art by Naiade.


And there you have it, my top 5 games!  I will always leave this list with a caveat; it could change at any time.  There are so many great games that I have never played and so many great ones that I would love to play!

I may do one more post in the series of some games that I think could crack the top 10 list.  Other than that post, I have some unboxing posts that will be coming soon of some games that should be in my possession soon.  Until next time, game on!