Woot!  Now for my top 10 favorite games (at least at the time of this posting) of all times!  This is the third post in a multi-part series focused on mine and my wife’s favorite games.  If you’ve missed the first couple of posts you can check them out at the links.  The first post is my wife’s top 5 games and the second post is my honorable mentions.

Check out the links if you’ve missed them.  Especially my wife’s post, because she’s awesome and plays games with me!  Also, just as a shameless pimp of my wife’s blog, check her foodie blog out at www.tastymess.org.  Now for the main event, the first part of my top 10 list!  This post will be games 6-10 and the following post in the next few days will be games 1-5.  Without further ado, games 6-10! 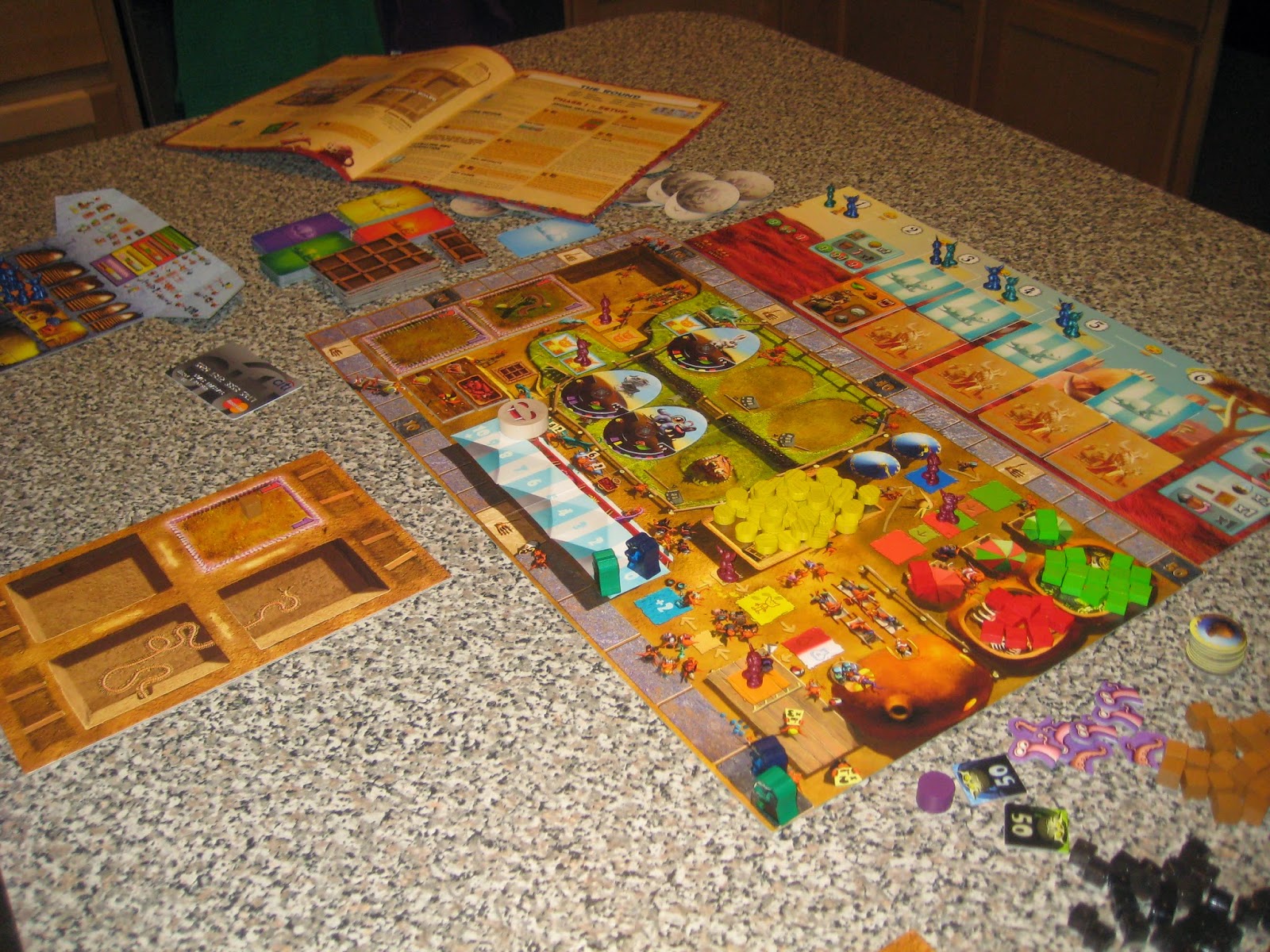 Dungeon Petz is a worker-placement game designed by the fantastic Vlaada Chvatil.  Chvatil has set himself up as one of the best modern game designers and this is just one of his fantastic creations.  Dungeon Petz is set up in a world that he already created in a previous game entitled Dungeon Lords.  Where Dungeon Lords was a worker-placement game that put you in the shoes of a dungeon overlord, Dungeon Petz puts you in the shoes of a family of imps.  As these imps you are trying to create a business model where you are raising, feeding, training, and ultimately selling dungeon monsters to overlords who are looking for creatures.  This is a cute game with awesome art that just oozes thematic quality.  A wonderful game and it is also on my wife’s top 5 list! 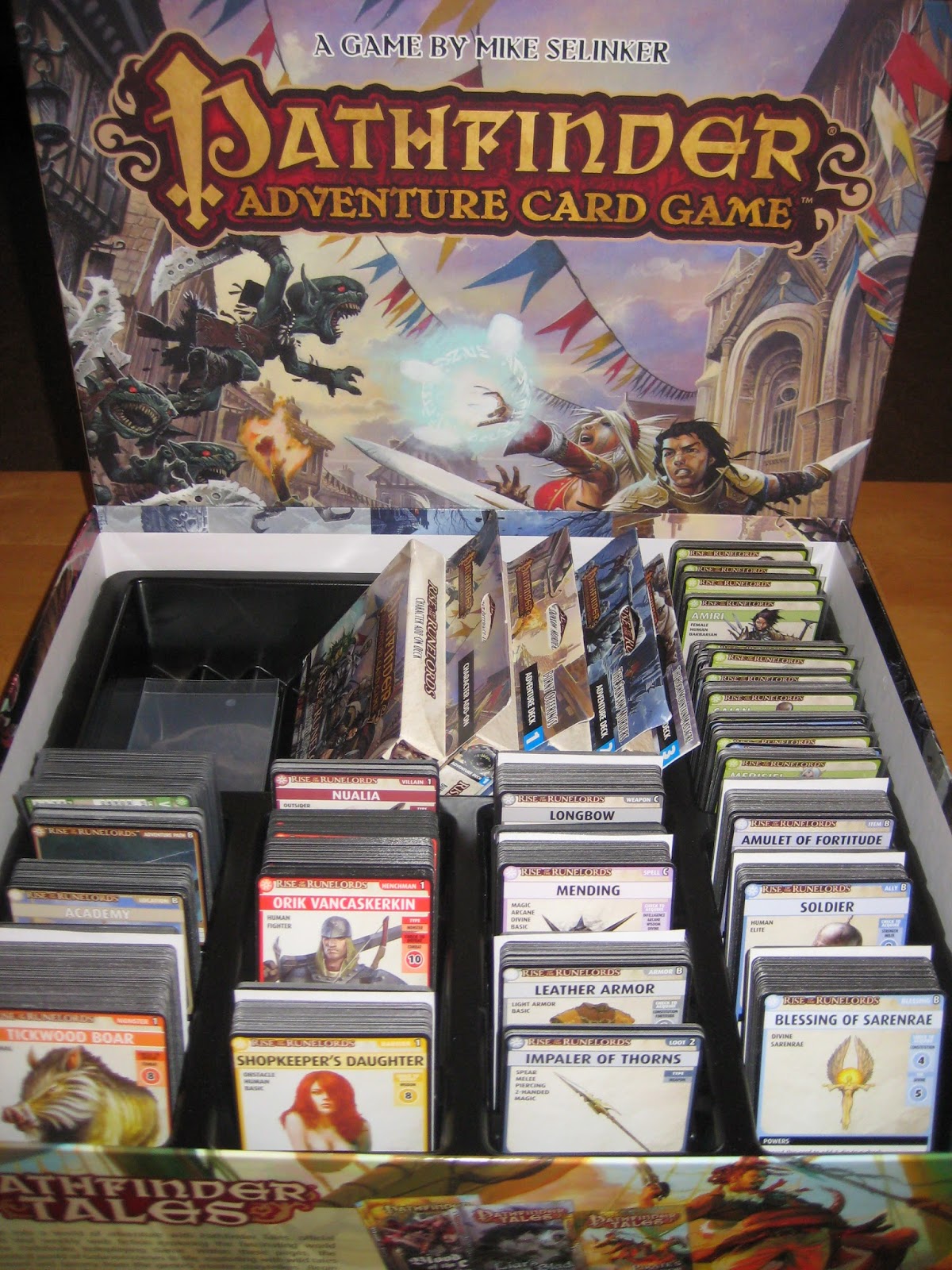 Pathfinder Adventure Card Game: Rise of the Runelords is a great card game with a progressive model that was designed by Mike Selinker.  This game takes the super-popular Pathfinder RPG and condenses it into a card game that still has some of the ideas of the big-brother RPG.  That being said, understand that this is NOT an RPG, it is a card game that is set in the same universe and has some really cool mechanic s and progressions.  You take your character all the way throughout the large box set, which has 6 total decks of adventures (as well as a basic introductory deck), weapons, allies, and challenges.  My wife and I love this game!  It is also on her top 5 list and she loves taking the character Merisiel (a rogue elf) while I play with Valeros, the mercenary warrior.  This game is very fun and lasts for a long while! 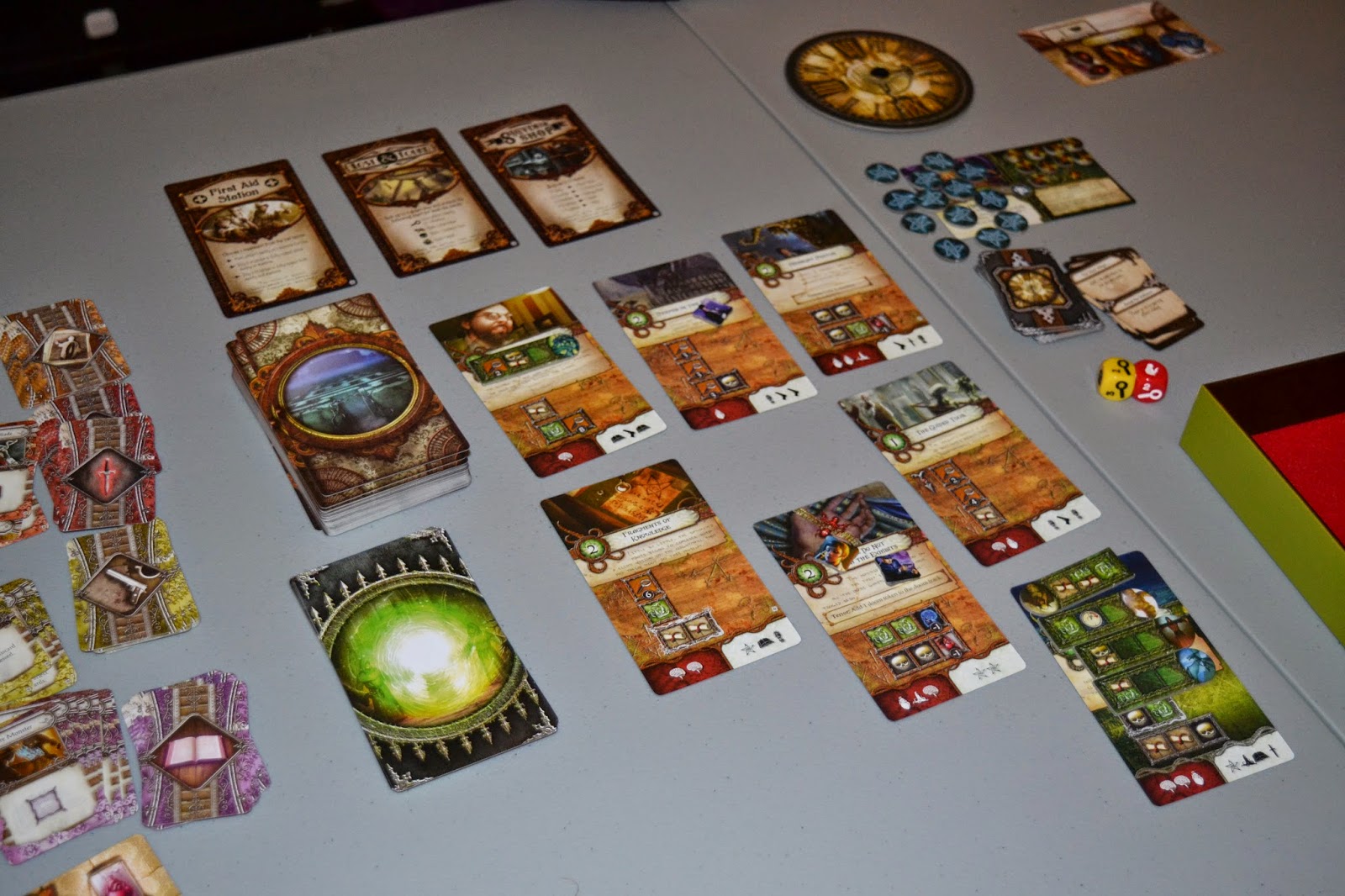 Elder Sign is a dice-rolling, press-your-luck, co-operative game that was designed by the fabulous Richard Launius and Kevin Wilson.  This game is one of the many Cthulhu-themed boardgames out there and really fits in with the rest of the Arkham Files series of games by Fantasy Flight.  These games include Arkham Horror, Eldritch Horror, and Mansions of Madness.  These are all heavily themed games that take place in the Call of Cthulhu mythos of H.P. Lovecraft fame.  Elder Sign is quite different from these other games because it is a dice-chucking game that applies Yahtzee-style mechanics into the theme.  Em and I love playing this game and have recently brought it out with other people and it’s gone over really well so far!  This game also has a couple of expansions, Unseen Forces and Gates of Arkham, which add new mechanics and give it higher replayability.  If you’re a fan of dice and Cthulhu, this is the game for you!

#7 – Sentinels of the Multiverse (Greater Than Games, LLC) 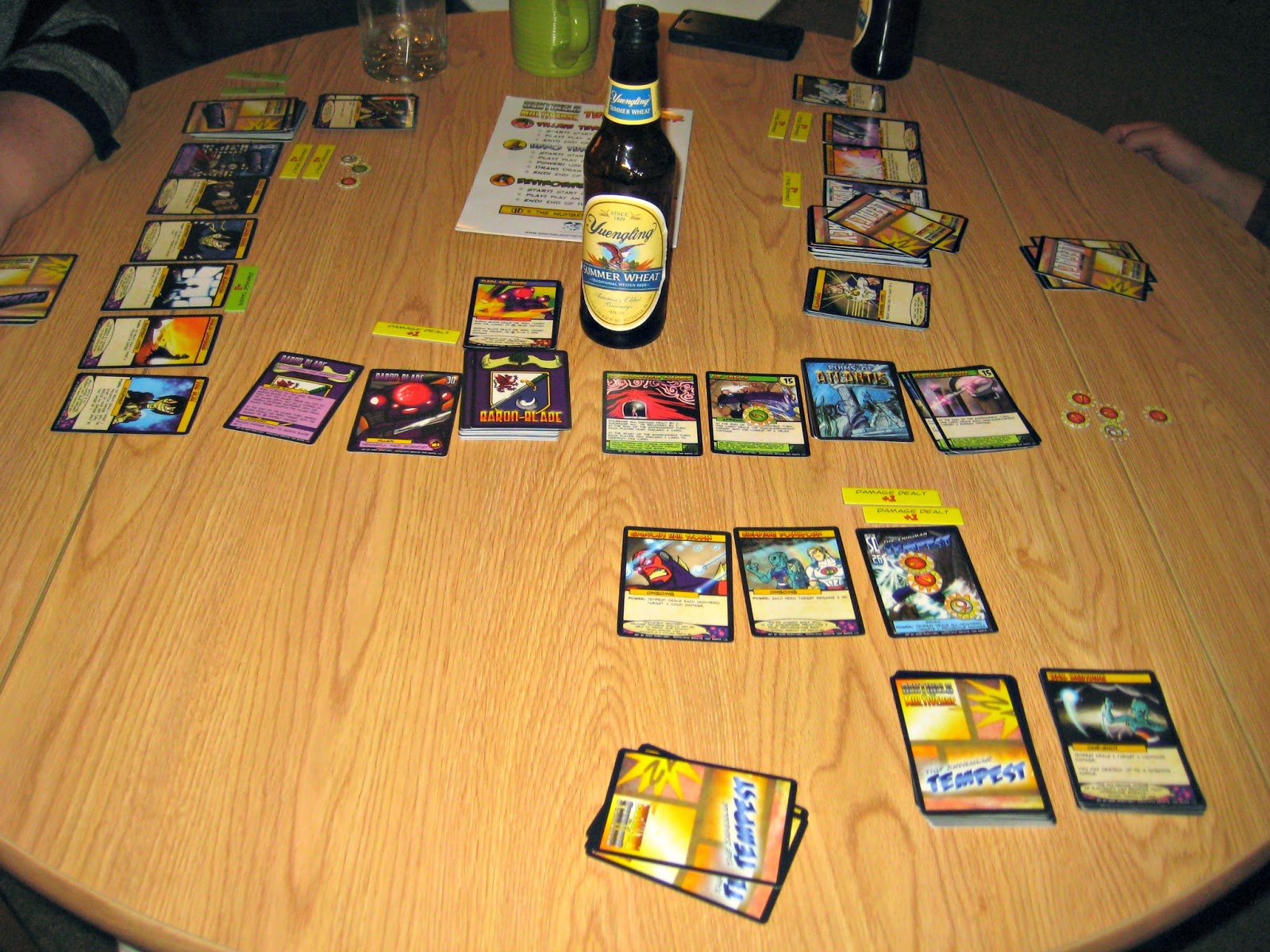 Sentinels of the Multiverse is a card game that is quite possibly the most thematic super-hero game that I’ve ever played!  This game was designed by Christopher Badell, Paul Bender, and Adam Rebottaro and is a wonderfully designed game.  What makes this game special is all of the individual decks of cards.  You take 3 to 5 hero decks (all of which are different), a villain deck (again, all different), and an environment deck (surprise, they are all different!) and then go to battle.  What makes this game incredibly thematic is the fact that each of these decks is completely different and really feel like the characters you’re playing.  Legacy is a tough hero and leader who consistently supports his fellow heroes.  Tachyon is a speedster whose deck is super fast.  Absolute Zero is an outcast hero who doesn’t really want to fight but is super powerful when he does.  All of these decks along with the villains and environments just make Sentinels great!  Also, the Multiverse has grown as there are many different expansions.  These expansions include Rook City, Infernal Relics, Shattered Timelines, Vengeance, Wrath of the Cosmos, and Villains of the Multiverse.  Along with these larger box expansions, there are multiple single decks such as the heroes Guise and Unity, the villains Ambuscade and Wager Master, and the environments Omnitron IV and The Final Wasteland just to name a few.  Sentinels is just a great, thematic card game that has tons of replay value! 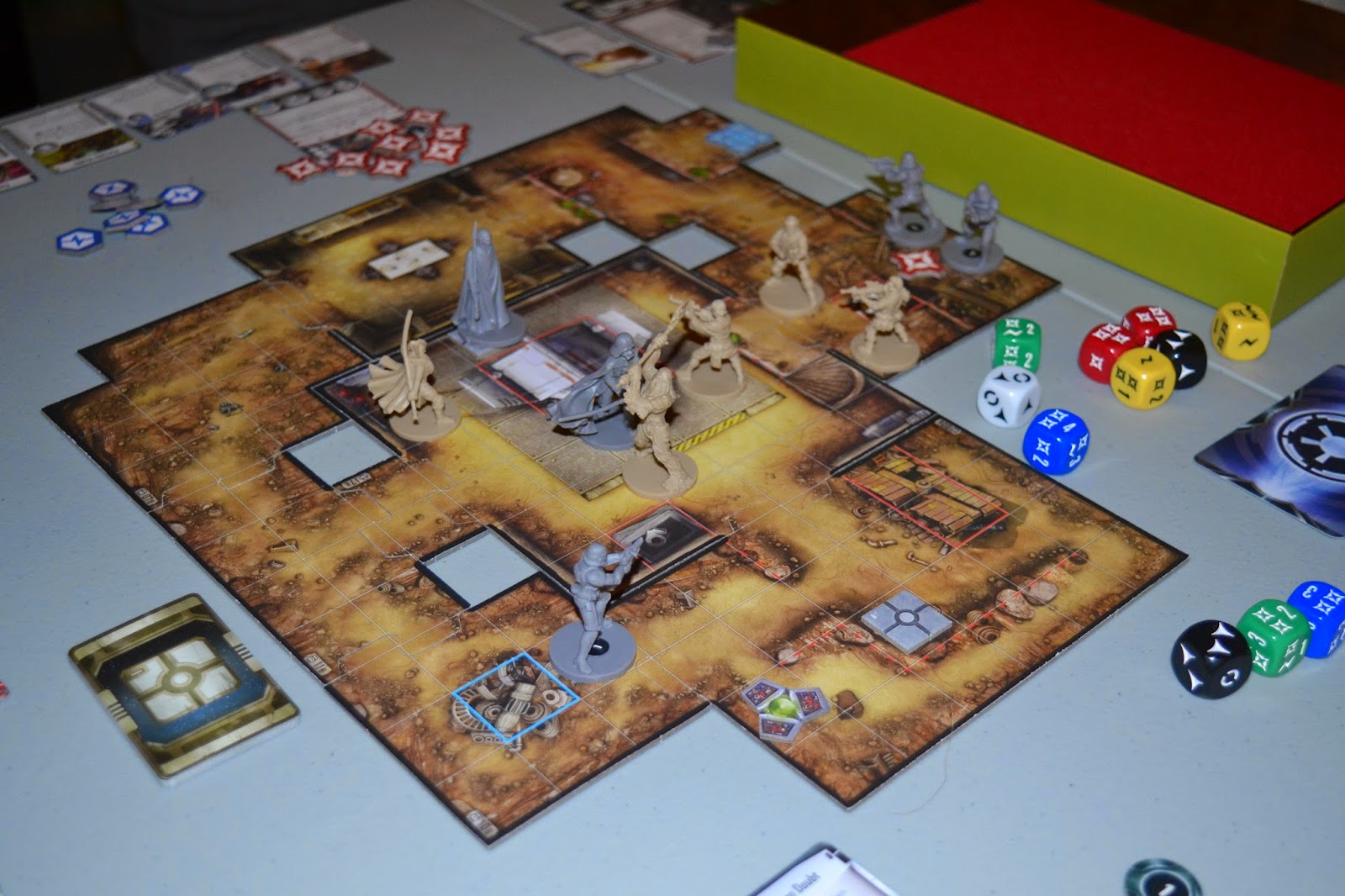 Star Wars: Imperial Assault makes it on to my list at number 6.  It was designed by Justin Kemppainen, Corey Konieczka (designer on the upcoming Gen Con release, Forbidden Stars), and Jonathan Ying.  Imperial Assault is a dungeon-crawl style game that was built on the same rules as Descent 2.0, also by Fantasy Flight Games.  This game is a one versus all game where one player takes the role of the imperials and the other players take the role of a band of rebel specialists.  This game is just amazing.  My wife and I have started one campaign with just us and another with a friend of ours and they are both tons of fun.  I already love the replayability of this game.  The game progresses through a campaign of about twelve missions and branches depending on whether the imperials or the rebels win a specific mission.  There are upgrades, new units, and new locations to explore through the different missions as each group levels up their characters.  I could easily see this game moving further up my list with more plays under my belt.  Also, I love the fact that this game already has a bunch of small character expansions such as Chewbacca, Han Solo, and IG-88 just to name a few.  Also, at the recent GAMA Trade Show, Fantasy Flight released the first pictures and information of the first big box expansion for Imperial Assault, Twin Shadows.  A great game with even greater replay value, a win-win!

Well, there are the bottom 5 games on my top 10 list.  if you have any questions just let me know in the comments.  Stay tuned for my top 5 games post in the next few days or so.  Until next time, game on!