This is the second part of a four-part (or maybe five-part!) series on favorite games.  If you missed it, my wife, Em, guest-blogged for the first time on my site listing her favorite five games.  I quite enjoyed this post and to be honest what quite pleasantly surprised by her list.  I knew her top game, but other than that I was very interested to see what she chose.  Check that post out at the following link:

That was the first post in the series.  This post will focus on my honorable mentions, and the next couple of posts will be my top 10 games!  Lastly, I may do a fifth post that would focus on some games that I expect will crack the list either soon or closely in the future.  Understand, this is the first time that I (and my wife as well!) have made a favorite games list.  We have now been seriously into the hobby for about a year and it has been great!  That being said, understand that my list may still be very fluid as there are so very many games that I want to play and haven’t yet.  With that caveat out of the way, here are the honorable mentions that just missed my top 10 list. 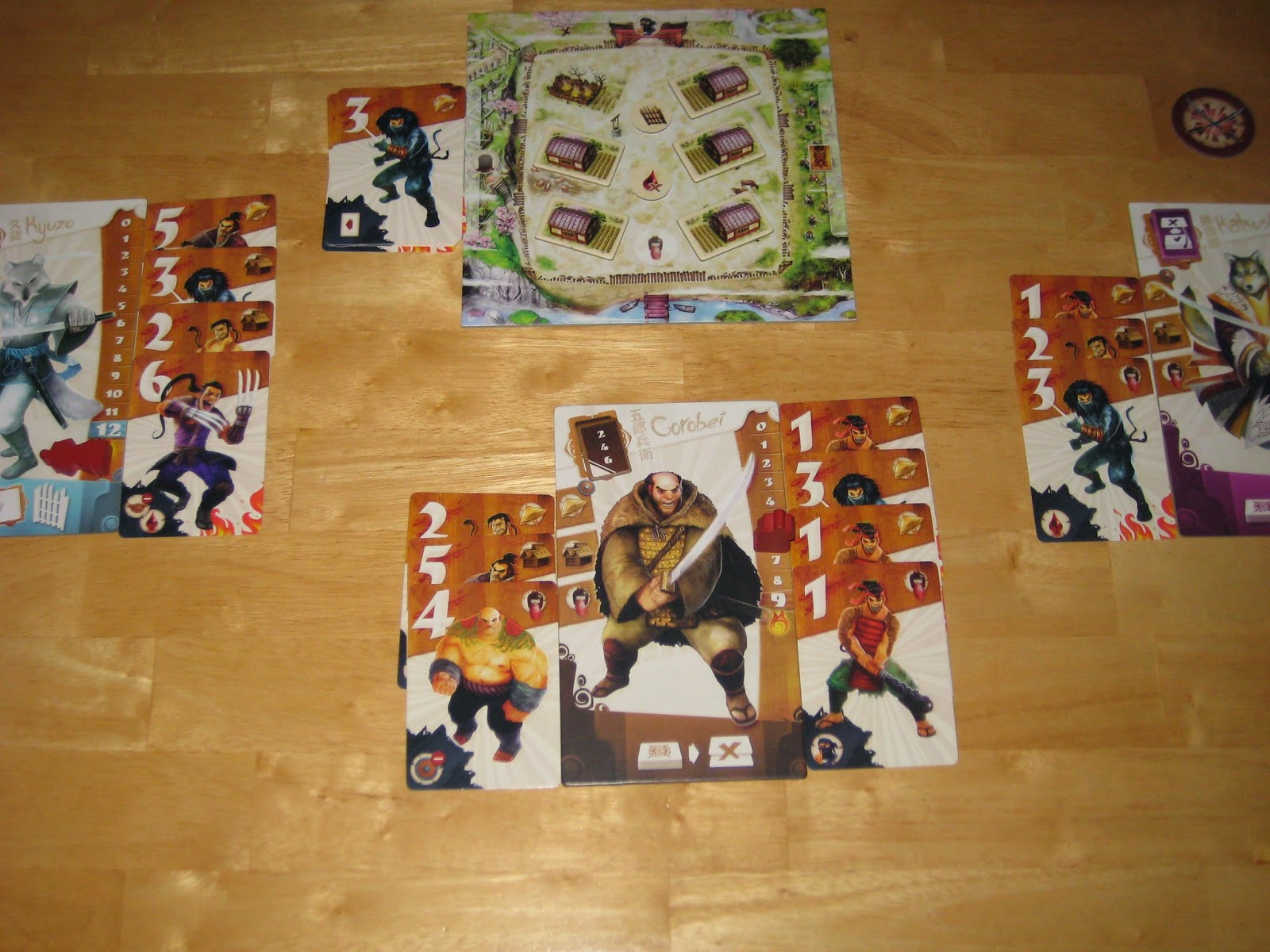 Samurai Spirit is a beautiful little co-operative game by the fantastic Antoine Bauza.  To be honest, I was a little worried when I first heard about this game that it would just be a re-skin of Bauza’s other fantastic co-op, Ghost Stories.  That being said, after getting and playing this game, it is nothing like Ghost Stories.  As a matter of fact, I think (at least for myself) that Samurai Spirit has more tactical and strategic decisions than Ghost Stories.  Because of this reason, I place it just ever so slightly ahead of Ghost Stories on my personal list.  This isn’t taking anything away from Ghost Stories; it is just saying how much I love Samurai Spirit as a total package.  Other high points of this game include the size of the game (much smaller shelf space and super portable!),  the beautiful artwork, and the fact that it plays anywhere from 1-7 players! 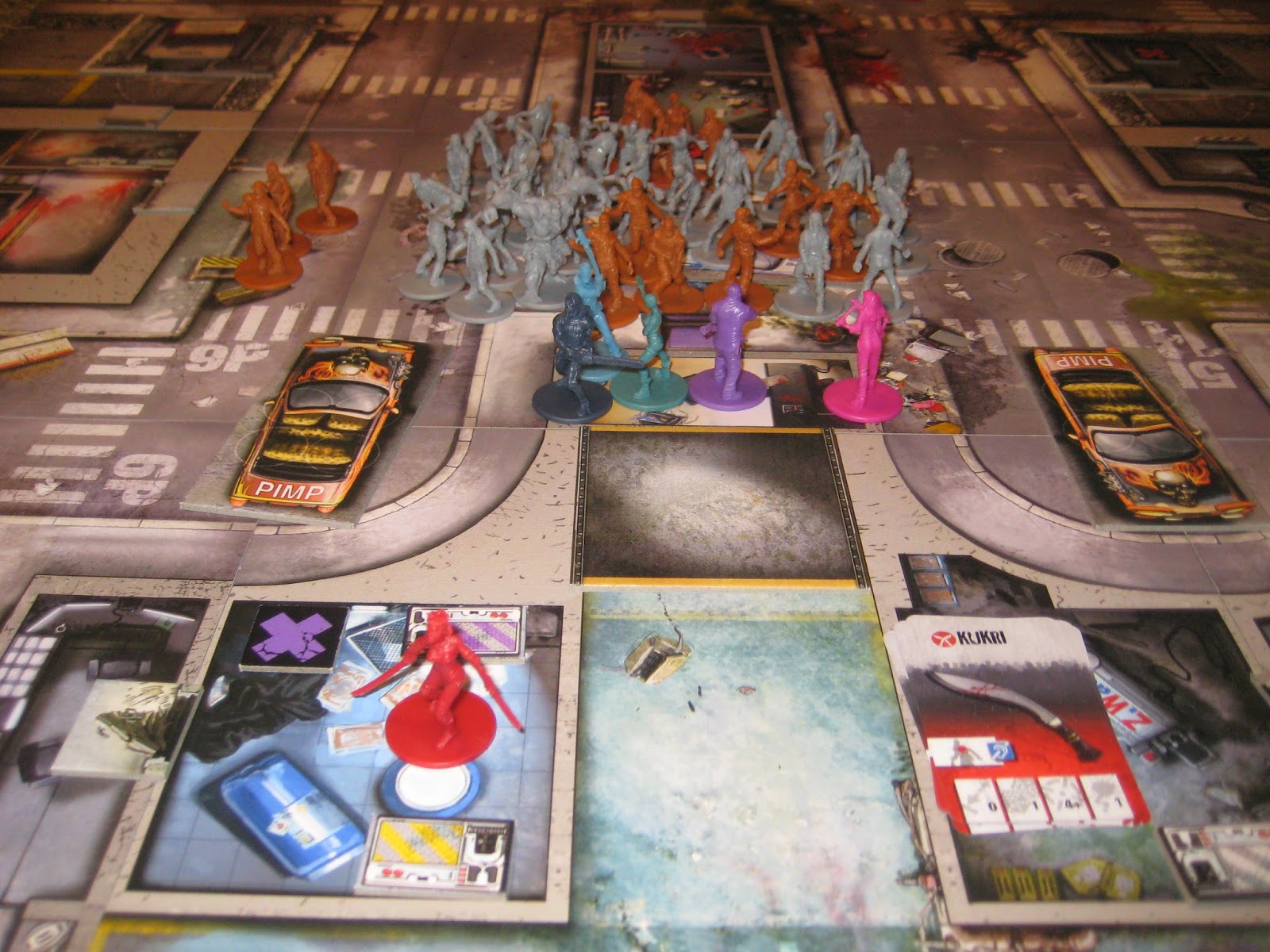 The next game on the honorable mentions list is Zombicide by Raphael Guiton, Jean-Baptiste Lullien, and Nicolas Raoult.  This game is just pure Ameri-trash (or Ameri-thrash) fun!  Cool Mini Or Not really hit a sweet spot with this game.  Cool Mini Or Not funded this game on Kickstarter a couple years ago and now have two other large box expansions (these are also stand-alone game) that have made millions of dollars on Kickstarter.  The expansions are Zombicide Season 2: Prison Outbreak (the one I have) and Zombicide Season 3: Rue Morgue.  Along with the large box expansions they have a couple of small box expansions in Zombicide: Toxic City Mall and Zombicide: Angry Neighbors.  Each of these adds different types of zombies and a few different mechanics.  Then, because this isn’t enough, they have multiple sets of zombies and Kickstarter-exclusive survivors that you can add into the mix.  All of this just makes for a super fun package that I pull out when I just want to roll some dice and kill some mindless drones of zombie attackers! 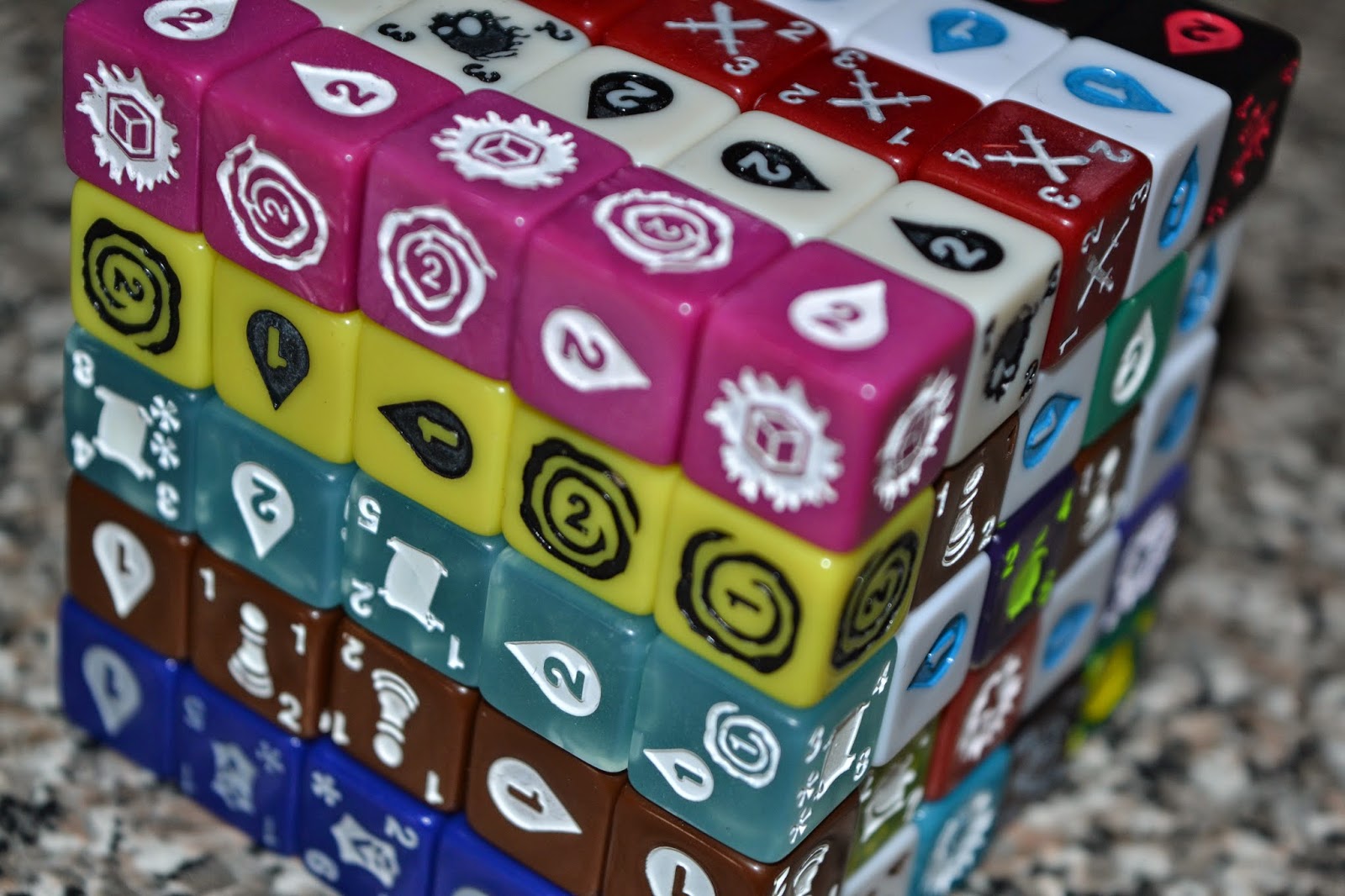 Quarriors is the next game to slide its way onto my honorable mentions list.  It was developed by the fantastic Eric Lang and Mike Elliott and effectively created a deck-building game that doesn’t use cards.  Quarriors is the first game to take the ideas of a deck-building game (using your weak cards to buy and use better cards) and create a dice-building game.  Now, instead of cards, you use custom dice to roll the currency of the game (called quiddity), and then use that currency to buy bigger and better creature dice.  This game is just fun!  My wife and l love to play this game and have just introduced a friend to it.  Needless to say, he loved it as well!  We would love to get some of the expansions (Quarriors! Quarmageddon, Quarriors! Quest of the Qladiator, and Quarriors! Quartifacts to name some of them) to add to the number of creatures and custom die!  The newer Dice Masters’ games (which we have yet to try) are based off of the ideas that Quarriors was created on. 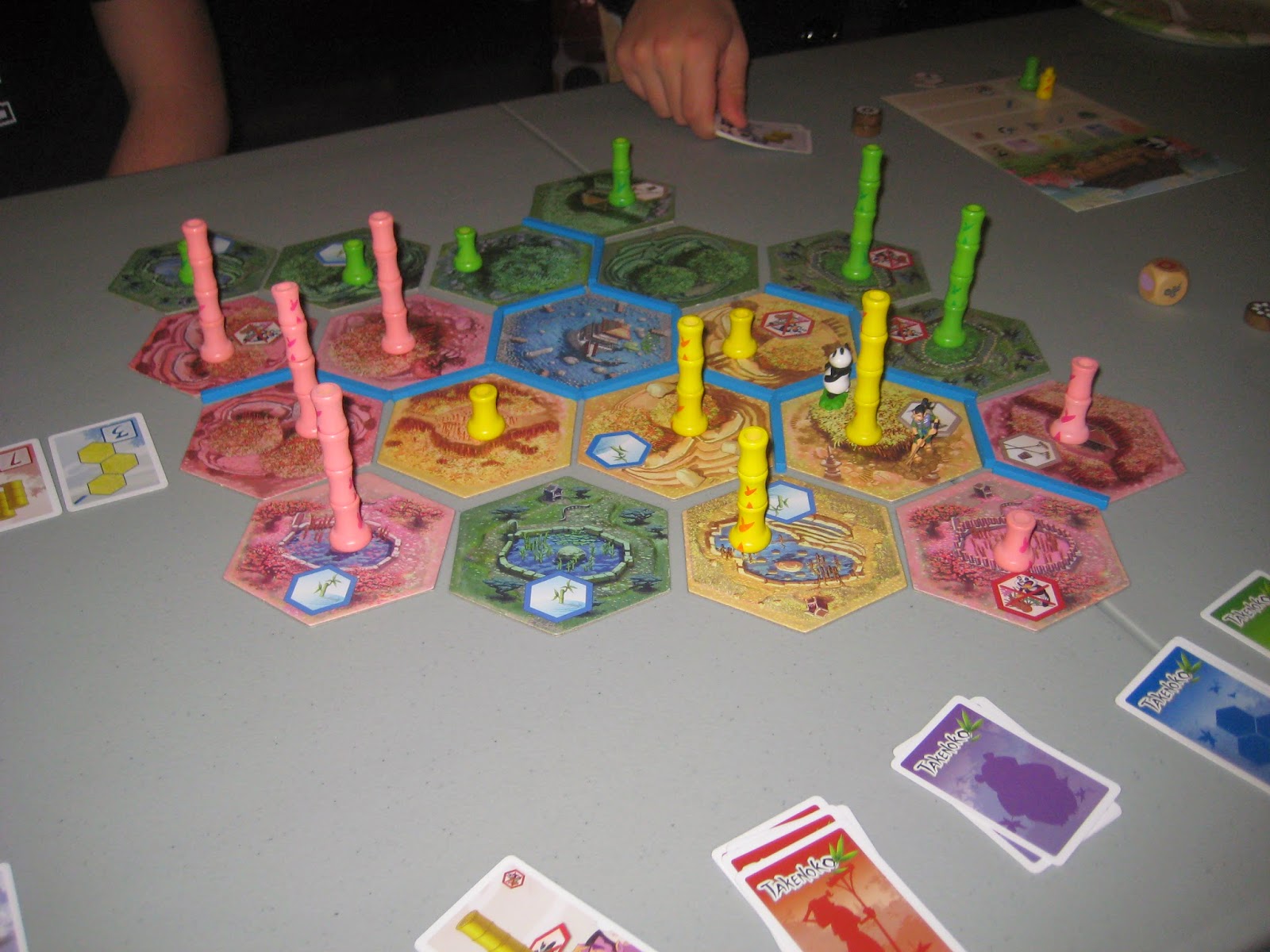 Takenoko is a lighter game by Antoine Bauza and is the second game to be on this list.  This game has some tile-placement, some set-collection, and some slight area control that are all shoved together into a game with absolutely beautiful artwork.  This was one of the first games that I used to really get my wife into the hobby and it is now on her top 5 list!  Basically, you take two actions during your turn in order to grow brightly colored bamboo (beautiful wooden pieces that connect together) with a little gardener miniature, eat the bamboo with a cute little panda miniature, and/or spread out the gardens with tiles-placement.  While doing these actions you collect and score cards with set-collection.  This is just a fun game that we use to get new players into the hobby!  I can’t wait till my daughter is old enough to play games because Takenoko will be one of the first we use to get her into the hobby.  Also, as a random aside, we will be getting a new expansion for this game around Gen Con 2015 that includes a female panda and little panda baby chits. 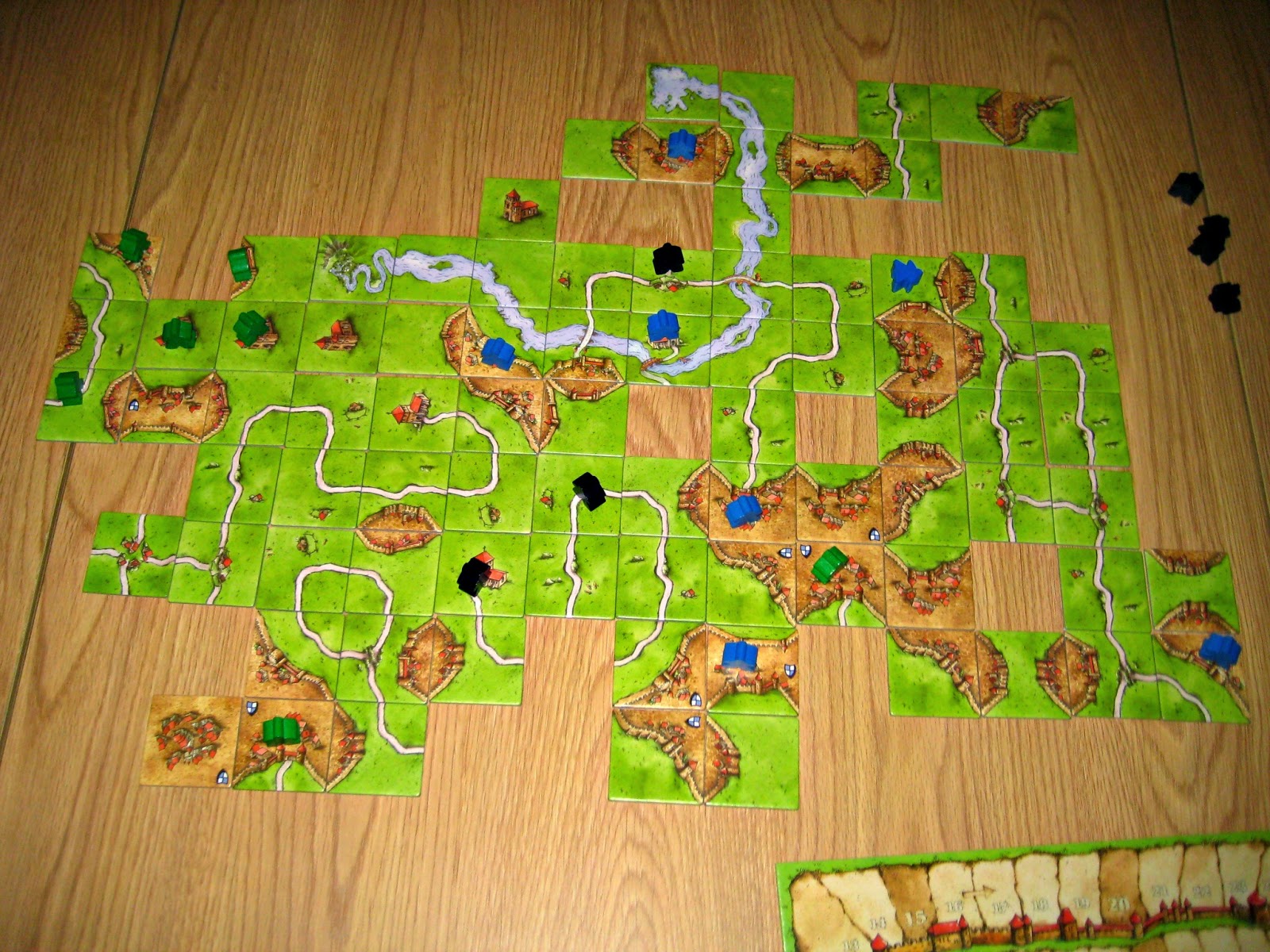 Finally, the game that just missed my top 10 is Carcassonne.  This is a tile-placement, area control and worker-placement game by Klaus-Jurgen Wrede that is now considered a modern classic.  Em and I got this game while we were on our anniversary trip this past year and it has become a favorite of both of us!  It is the number 2 game on Em’s top 5 list, just getting edged out by the fantastic tableau-building game, Seasons.  This game has you taking small tiles and creating a country landscape and scoring points as you finish specific areas.  I would also like to make a note that I love the artwork on the older edition of this game over the newer edition of the game.  I love the sparse artwork of the original and personally think that the new edition’s art is too busy.  Again, this is just personal preference, but I do think that this should be noted for those looking to buy this game.  This is a light-weight, gateway game that is fun for heavier gamers as well.  We break this game out to people who have never played and they all seem to really like it as well!  Again, on a side note, this game has tons of great expansions including (but not limited to) Inns & Cathedrals, Traders & Builders, The Princess & the Dragon, The Tower, Abbey & Mayor, Hills & Sheep, and more.  I love this game, and it is one I could see jumping higher with more plays and expansions!

There you have it.  These are the games that just missed my top 10.  In no way does this make these games bad, as a matter of fact, I love them all!  What it does mean is that I have 10 games that I love more.  Stay tuned for my next couple posts as I reveal my favorite 10 games.  Until next time, game on!

Email ThisBlogThis!Share to TwitterShare to FacebookShare to Pinterest
Labels: top 10