Yay!  Now we move onto my Essen Spiel 2016 series!  We are trucking through the major boardgaming convention time of year and the next one on the docket is Spiel in Essen, Germany.  This is either the largest or second largest (depending on which numbers you are looking at) boardgaming convention in the world and the largest amount of gaming releases happens there.  This is a gaming convention I would love to go to one of these days as it has a ton of releases that I am interested in.  As with every year I am getting the majority of my information from W. Eric Martin’s yearly Essen Spiel Preview List on BoardGameGeek.  If you are curious feel free to check out the 31 pages and 755 entries (at the time of this posting) at http://www.boardgamegeek.com/geeklist/193588/spiel-2016-preview.  This post will focus on my top 5 anticipated game expansions that are being released at the convention.  Just as a note, I’m trying to only include the expansions that are being released for the first time at this convention and that have an English rule-set of some sort in the box.  Of course this is all subject to change if they don’t get them in for some reason.  Okay, with all of that out of the way, let’s see what my top 5 anticipated game expansions are! 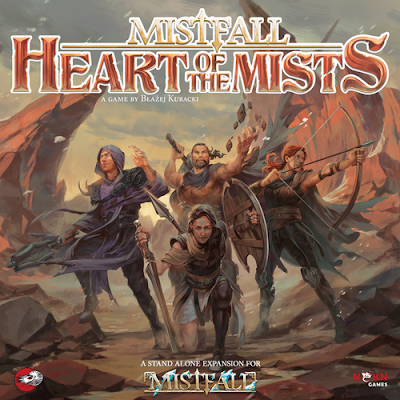 MIstfall: Heart of Mists is an expansion to the 2015 NSKN Games/Passport Game Studios game, Mistfall by Błażej Kubacki.  Heart of mists is designed by Kubacki as well and is slated to release at this year’s Essen Spiel.  Mistfall is an adventure card game that includes heavy doses of hand management, deck building, and variable player powers all in a co-operative experience.  This game is much like its predecessor where you take a hand of cards and use them in the most efficient way in order to defeat your opponents and continue on whatever quest you have taken on.  The card play is very good and really gives a cool feel to each of the characters.  This expansion adds more characters, quests, locations, and monsters to the mix while streamlining some of the more “fiddly bits” from the original.  I am really looking forward to this expansion and will probably pick it up at some point.  The original is great and I really hope this one amps up the cool factor while lessening the weaknesses of said original. 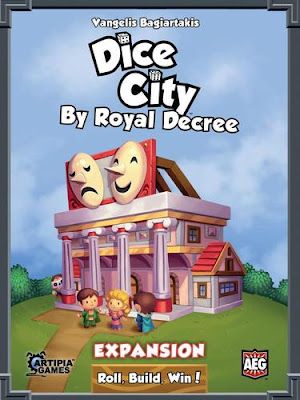 Dice City: By Royal Decree is an expansion to the 2015 Alderac Entertainment Group hit, Dice City by Vangelias Bagiartakis.  By Royal Decree is designed by Bariatakis and will be releasing at Essen Spiel 2016.  Dice City is a dice rolling and placement game where you are able to build up the city by paying resources that you get throughout the turns.  This expansion adds another board to the game along with some more dice.  This just gives more tools/places for you to go with the dice and give more decisions.  More to this game is always a good thing in my opinion.  Looking forward to getting this one and trying it out eventually.

Potion Explosion: The Fifth Ingredient is an expansion to the 2016 Horrible Games/Cool Mini hit, Potion Explosion by Setfano Castelli, Andrea Crespi and Lorenzo Silva.  The Fifth Ingredient is designed by the same group of designers and will be releasing and this year’s Spiel.  Potion Explosion is a simple premise with a fairly high amount of decision points.  You are pulling marbles out of a dispenser and trying to match them up in order to get “explosions” where you are then able to take marbles of a like color.  This expansion will add in a fifth ingredient which will give the game even more diversity as there is another ingredient that is added that plays like a wild card and allows you to create even more potions.  This is an awesome game and more variety is a win in my book! 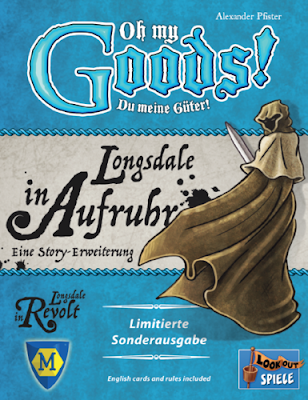 Oh My Goods!: Longsdale in Aufruhr is an expansion to the 2015 Lookout Games/Mayfair Games release, Oh My Goods! by Alexander Pfister.  Longsdale in Aufruhr is also designed by Alexander Pfister and will be released at Essen Spiel 2016.  Oh My Goods! is a game where you have a hand of cards that can be used in multiple different ways.  They are goods, money, and buildings depending on how you use them.  You will take a worker that you have and decide whether he/she will work well or “lazy.”  If they work well you can get two goods on the building they are on as opposed to only one.  This may not seem like much but it can be a pretty big swing depending on how much each good is worth on said building.  My wife and I love this game and it is probably in her top 10 of all time.  This expansion seems to be bringing a lot to the table and I’m very excited about that!  It apparently consists of five different chapters that will form a cohesive story.  There are character cards, more buildings, chapter cards, and event cards in the expansion and these things together all make it a must buy for us! 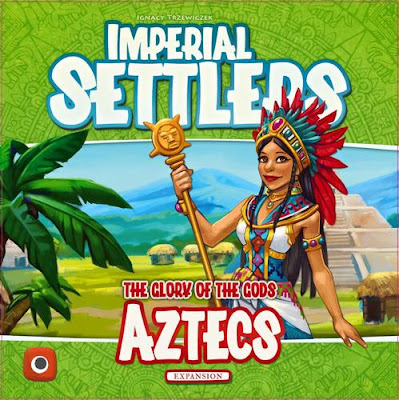 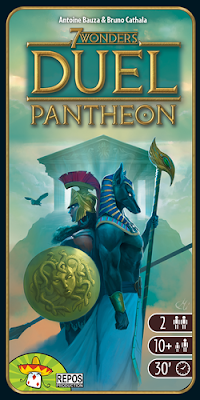 7 Wonders: Duel: Pantheon is the new expansion to the Repos Production/Asmodee two-player game, 7 Wonders: Duel by Antoine Bauza and Bruno Cathala.  Pantheon is also designed by Bauza and Cathala and will be coming out at Essen Spiel this year.  7 Wonders: Duel takes the card-drafting of its big brother, 7 Wonders, and distills it into a pure, two-player card game that is just amazing.  This has quickly become a favorite of Em and I and it isn’t ever leaving our collection.  Pantheon adds in god cards and temple cards that will change some of the ways the game is played and it appears to be quite an amazing expansion to the base game.  This is our number one anticipated expansion that is coming out this year and will be bought as soon as we are able to.

And there you have it, my top 5 (plus 1) anticipated expansions that will be coming out at Essen Spiel this year.  I can’t wait for all of these as I have the base game to each one and am looking forward to giving some of my favorite’s new life.  These expansions won’t be needed to make these game good as they are already really good, but I do love when a good expansion adds just a little into an already great experience.  What are your most anticipated expansions of the convention this year?  Let me know in the comments below.  And please feel free to look out for my top 5 reimplementations/reprints in the next of my Essen Spiel series.  Thanks so much for reading.  Until next time, game on!