Recently I received my first Stronghold Games release.  This game, entitled Diamonds, is designed by Mike Fitzgerald and was released at Gen Con this year to rave reviews.  Diamonds is a trick-taking game that plays somewhat like Hearts or Spades but really kicks it up a notch.  The great part about this game is that even when you are unable to get a trick you can still get “suit-actions.”  These are simple actions that you are able to take by playing card off-suit when you don’t have the same suit that is started.  This makes the game much more interesting than a “normal” trick-taking game.  These suit-actions give every player a chance to get points even when they aren’t taking any tricks for the round. 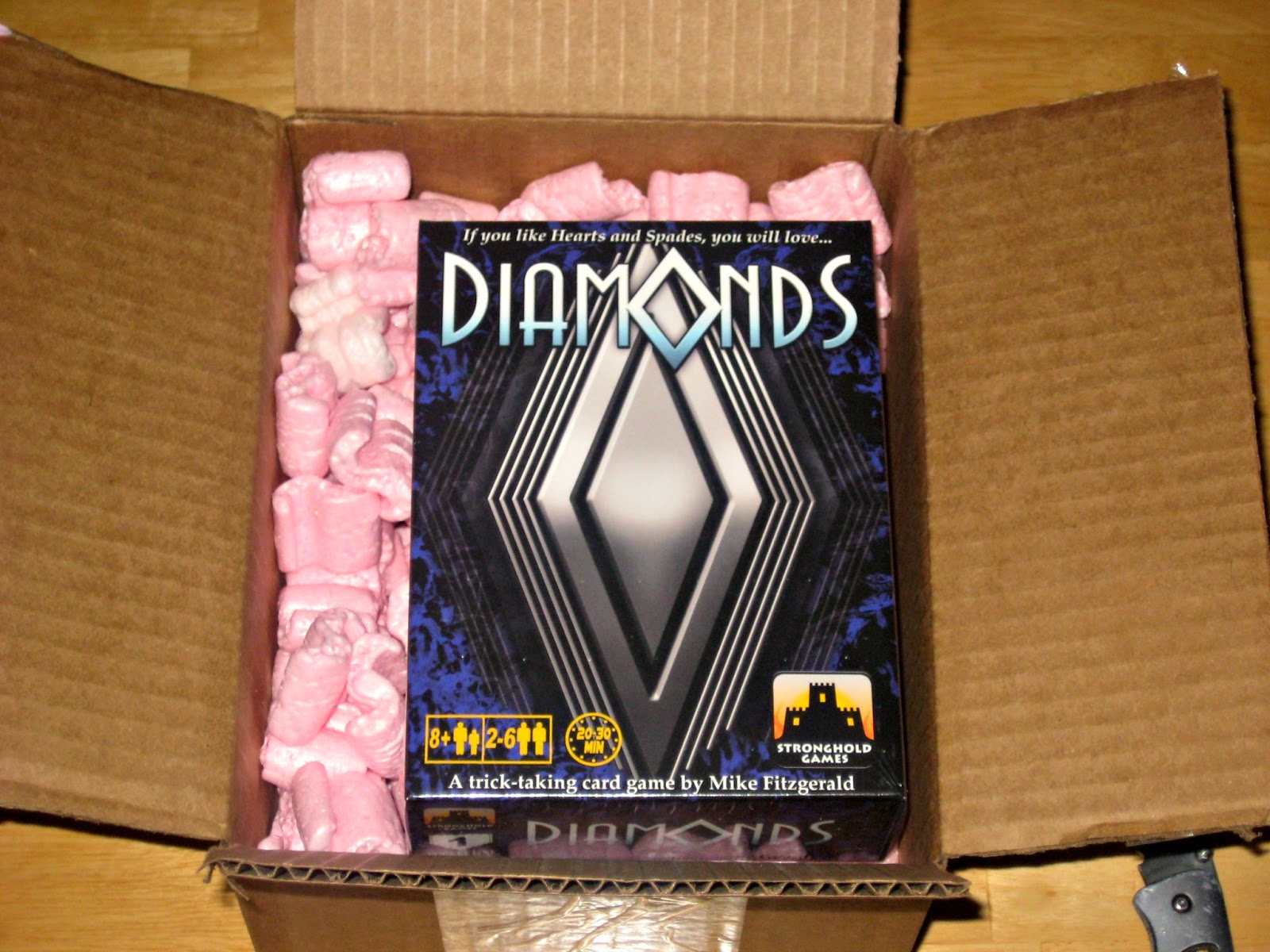 Enough of the gameplay, as that isn’t what this post is about.  This is about the components and the unboxing of Diamonds!  Diamonds is the first game in Stronghold Games’ pocket line.  This means that it is a smaller game with less components that some of the larger Euro-style games that they’ve released recently (i.e. Panamax or Kanban: Automotive Revolution).  Now, just because it has less components doesn’t mean that this game suffers from lack-luster pieces, as a matter of fact, they are quite amazing! 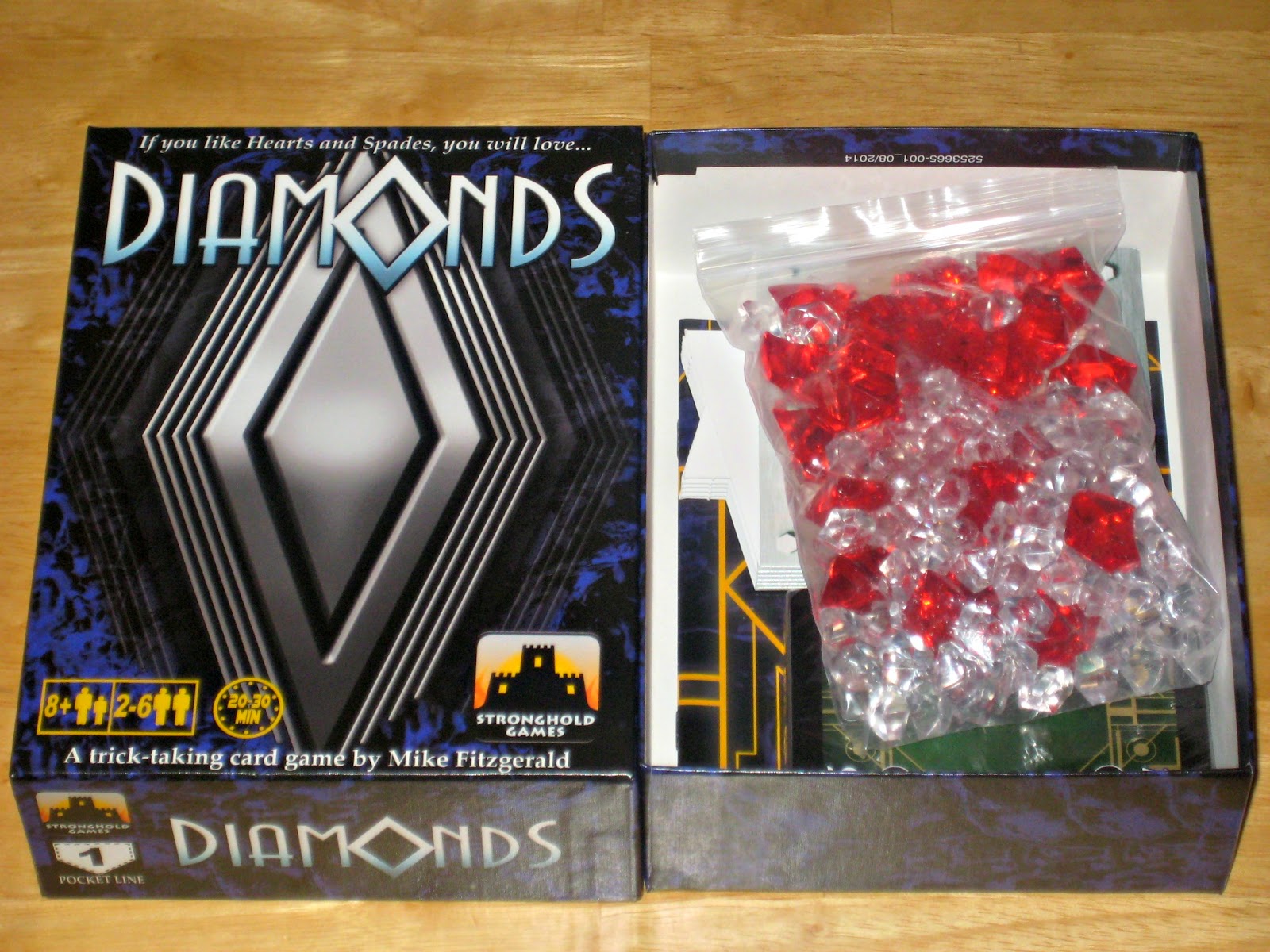 To start with, this is a card game.  That being said, it makes sense that the cards are the main part of the game.  Stronghold could have put in any deck of cards and it would have worked pretty well, instead they made an absolutely gorgeous deck of 60 cards.  These are linen-finished cards with great heft and fantastic art.  I can’t stress enough how beautiful these cards are.  They have an Art Deco feel to them and they are finished in a metallic ink that shimmers and adds to the overall beauty of the cards.  There are four suits, spades, clubs, hearts and, of course, diamonds.  Each of the four suits has fifteen cards numbered one through fifteen.  There are no face cards or trumps in this game and I think that adds to the simplistic beauty in the gameplay. 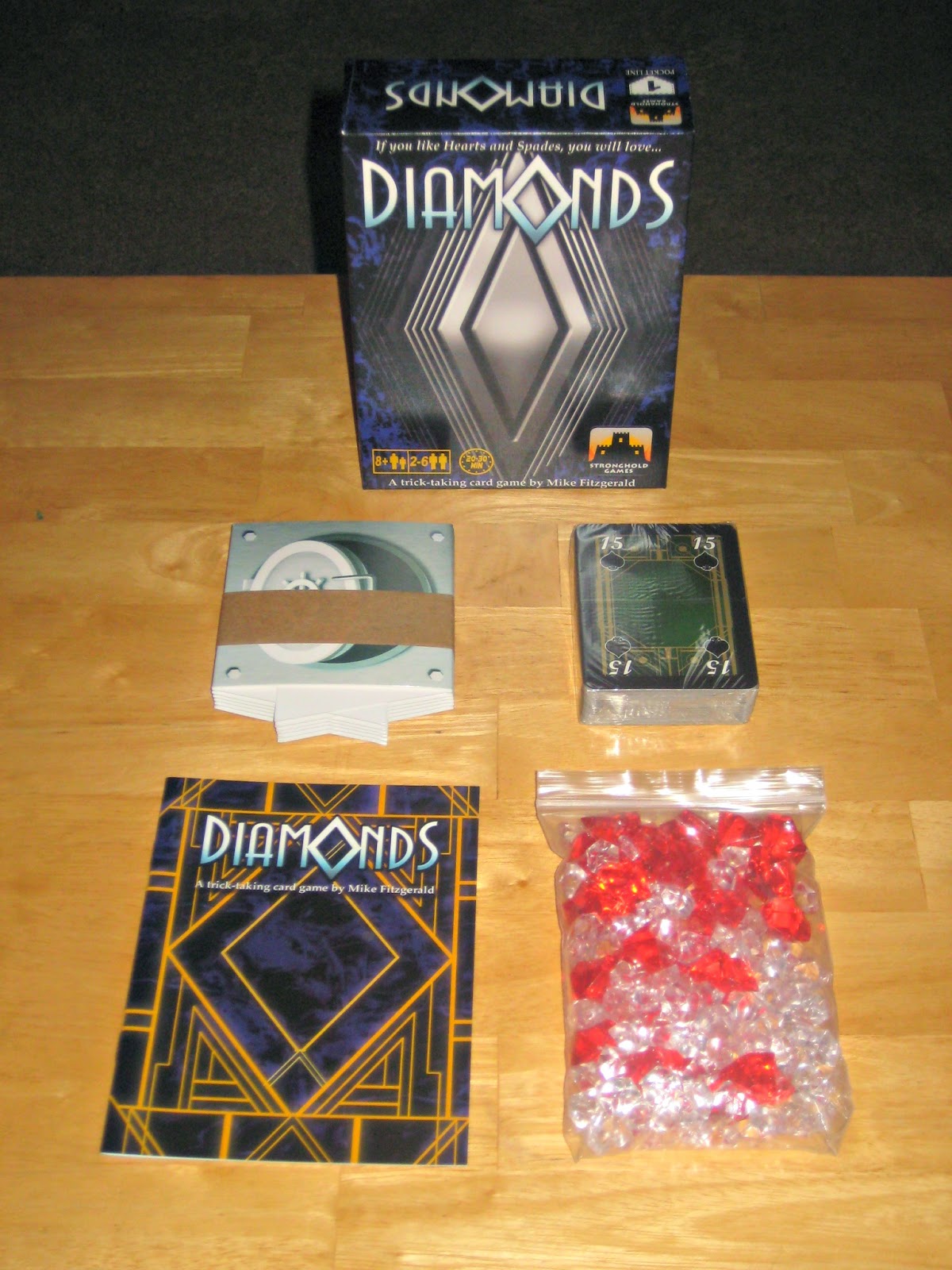 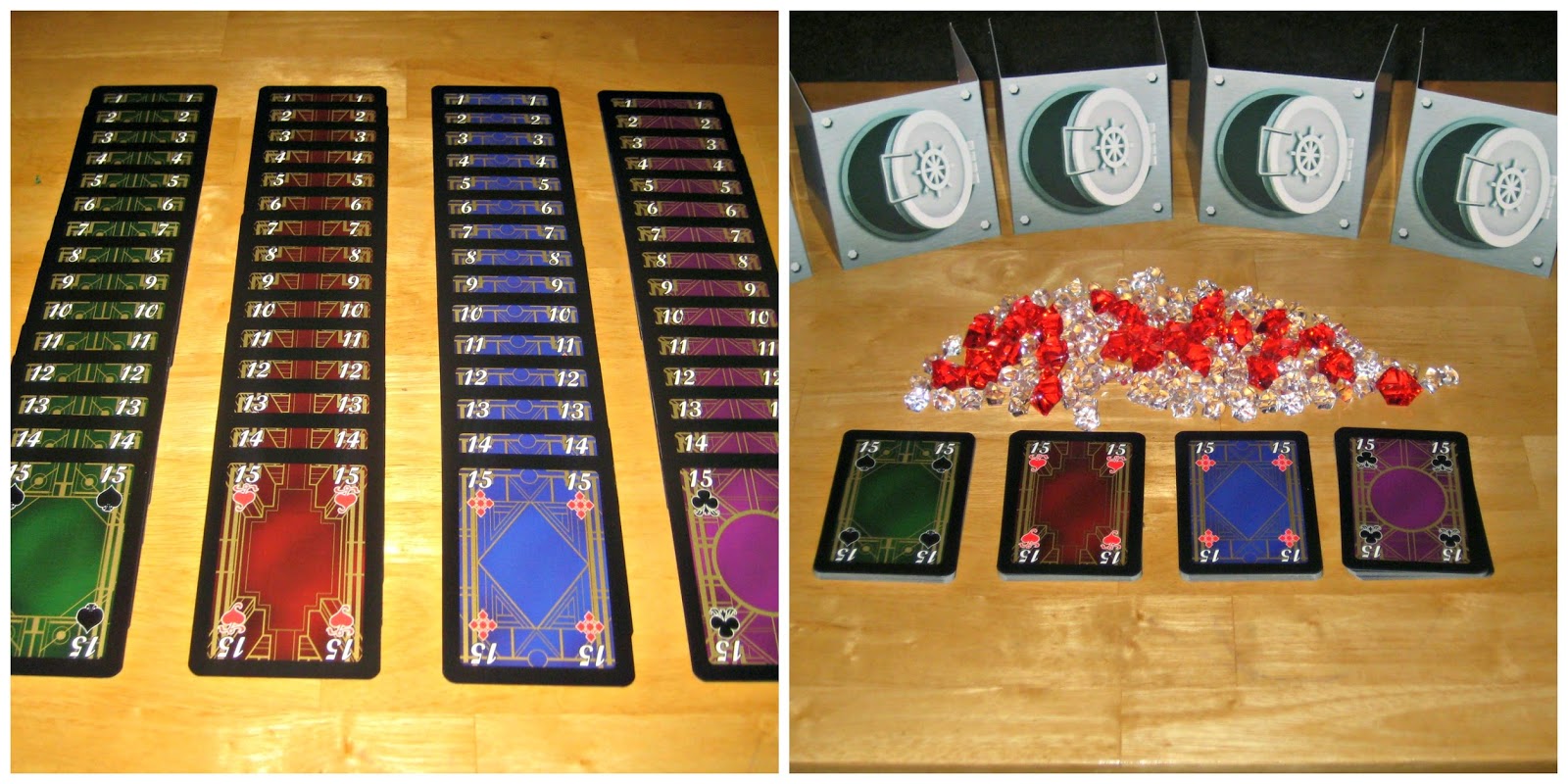 While the cards are the main part of the game, Stronghold took it a step further and gave us an awesomely tactile component in plastic diamond components.  There are two different types of diamond components in the game.  The first are the smaller, clear diamonds that are worth one (or two) points.  The second are the larger, red diamonds that are worth five (or ten) points.  These diamonds are how you keep score throughout the game and are what you use to take your suit actions.  The simple tactile feeling of these crystals makes the game so much more than just a card game!  They give a both a visual and physical feel that really adds to the fun of Diamonds. 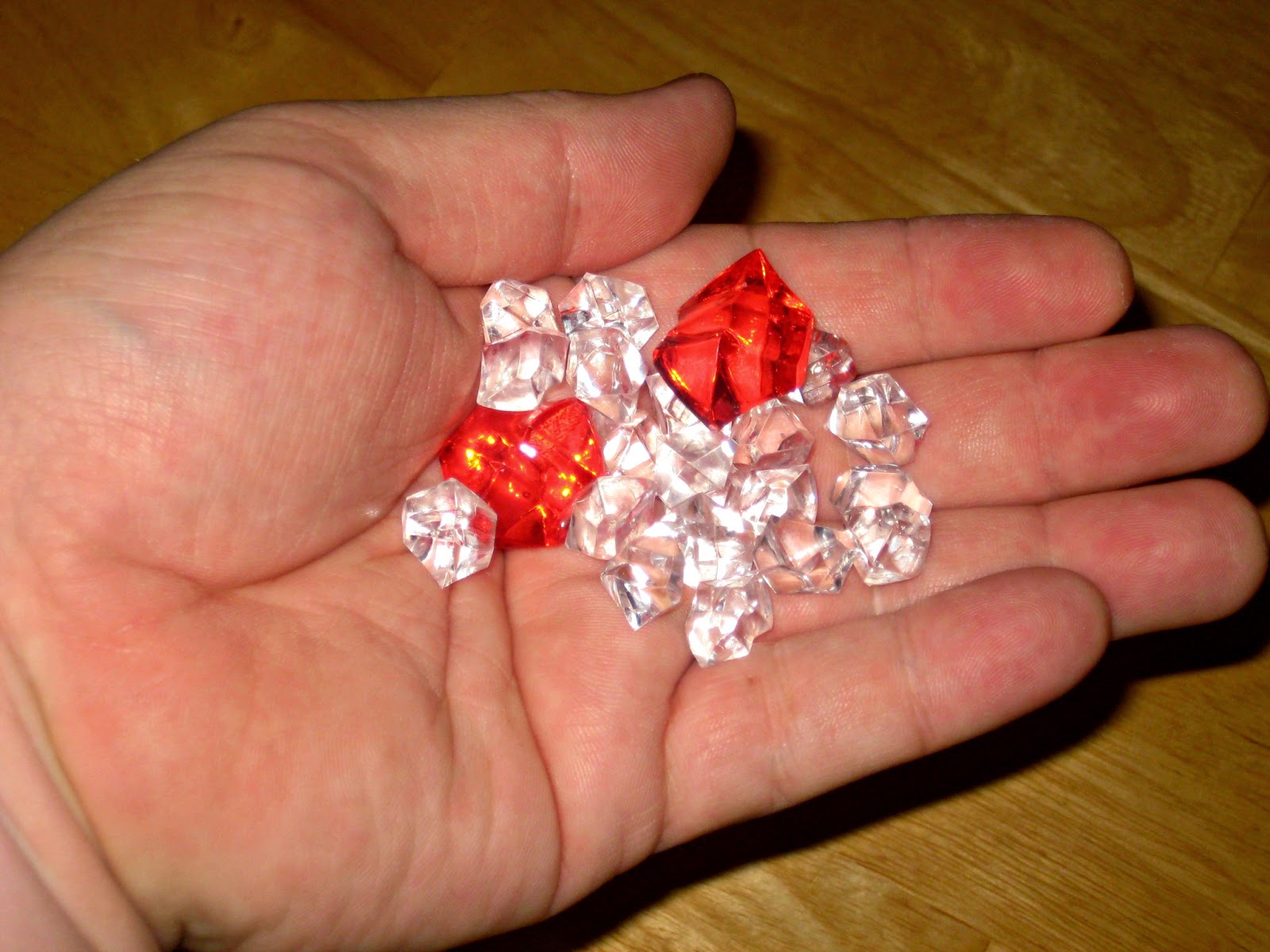 Lastly, there are six player screens and six player aid cards that are included in the game.  Before playing the game I thought the screens were overkill, but after playing I see that they add to the fun of not necessarily knowing what your opponents have in their vaults.  They are a simple bun fun addition to the game.  I am a huge fan of adding player aids into the game, so I think the addition of the six suit-action card aids was a perfect component to print with the game. 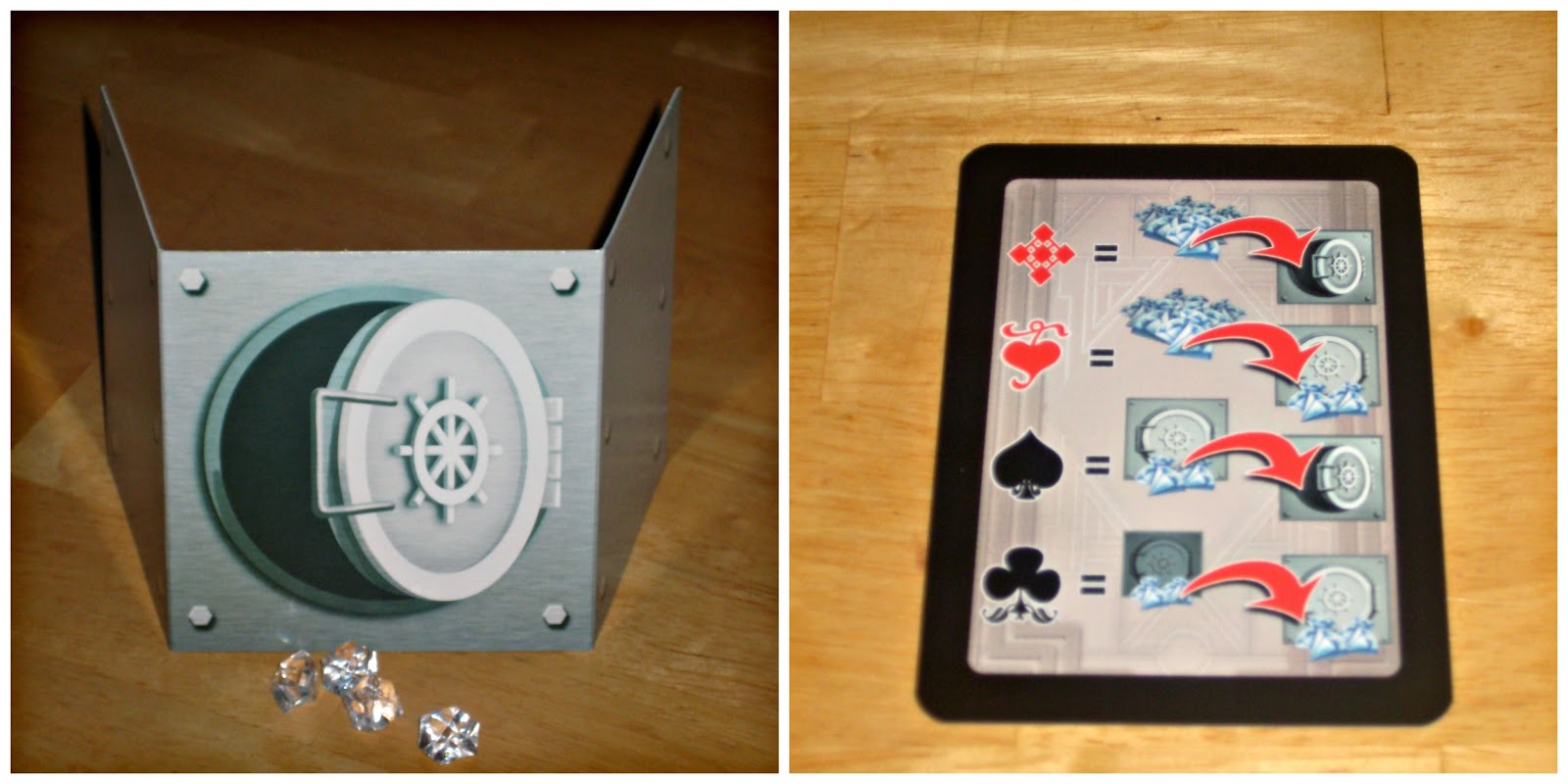 All in all, the components to this simple and beautiful trick-taking game are perfect.  Stronghold Games could have gone cheap and flimsy but instead really bumped up their game and made this game a wonderful addition to my game library.  Thanks for taking the time to read this post.  Next up will be an unboxing of Imperial Settlers by Ignacy Trzewiczek and Portal Games which should be in my hands in a couple of days!  Until next time, game on!